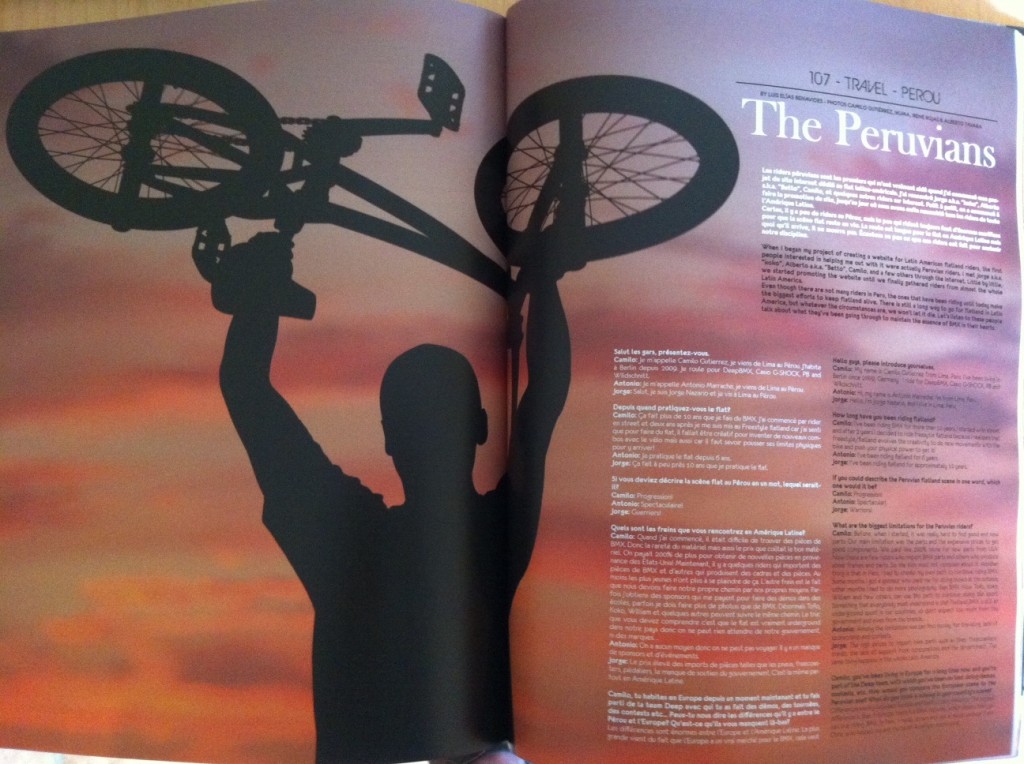 The first impression as ART came through the post, was “wow, this is a thick issue!”, in its third issue, the magazine is steadily growing, packed with all types of BMX, even racing. This of course hurts the amount of flatland coverage in the magazine, in order to survive to sell the magazine, you gotta do, what you gotta do., magazines such as The Albion, Ride Uk, and Case after all barely cover flat, maybe an advert or two.
I was curious what would be inside this issue after what happened at Fise, would Alain voice his opinion, or would he stay quiet? So without further due, what is inside Issue 3 flatland wise? 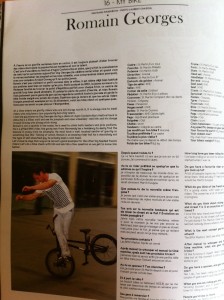 -The first feature and one of the best of the issue, is a page entitled “My Bike” with St Martin rider, Romain Georges, a great piece by Manu Massabova that has short interview plus bikecheck, the piece is brutally honest, “At a time where we glorify riders who are not always worth it. It is always nice meet riders who (not) only have a low popularity, but a big talent…..Let’s hope he stays that way so he can set a good example for the other big headed French riders!”. Shame this article wasn’t longer!

-Nao Yoshida has a two page interview discussing his decision to drop one form of art for another, this interview needed to be longer, for my part I thought it was just getting interesting then it was over, great article nevertheless. 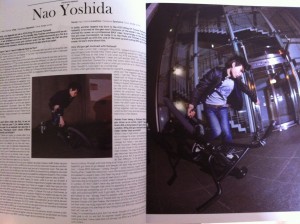 -The Fise contest has 8 pages, that focuses mostly on the photos, JF Boulainne has a photo on the opening spread, but in terms of flatland coverage, that was it, somewhat disappointed I have to say.

-The Flamenco Contest has 3 pages, with text by Viki Gomez, some great photos by Alberto Lessmann, Viki reports “ Everyone loved and enjoyed this new concept of contest, this has been the best concept ever made in flatland for the public, for the TV and everyone! Kids and elder people loved and enjoyed this show and I am proud to say that so far this has been the best flatland competition ever! It has been in 120 countries worldwide now and its unstoppable! Next year we are planning to make it in Japan!”. 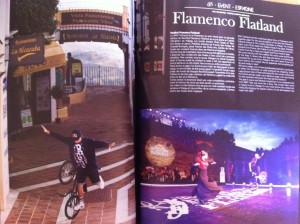 -My favourite article of the issue is entitled “The Peruvians” by Luis Elis Benavides, a nice 4 page article interviewing three riders from Peru, Camillo Gutierrez, Antonio Marrache, and Jorge Nazario, they talk about their limitations, the contest scene, and Jorge’s flatland brand “Supreme Bykes”. The photography is great, and reminded me of Cream Magazine when it was at its peak!

Towards the back of the magazine, flatland starts appearing a lot more, interesting!
-Paul Dezeix from Montpelier, has a two page interview by Louis Nassar, his comment that “The French scene is the best! Well that’s a bit of debate there!” was amusing. Its great to see new faces featured in the magazine. Really like the dark shot of Paul in xft steam position. 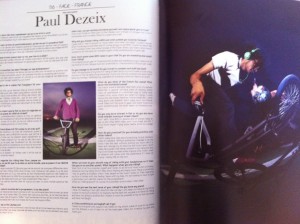 -Fise Shanghai trip gets one page, nice shot of Takahiro Ikeda doing the seatpost time machine, editor Alain is pretty much quiet in this issue which is a shame, here he writes “that Fise maybe in China so you’d better be ready to accept a different way”.
-The Barcelona Extreme contest that happened the day after Fise, gets a page, with Viki Gomez once again reporting, great to see Viki writing more about flatland! 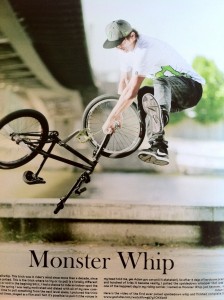 -The last feature is Adam Kun’s Monster Whip, with Adam telling his story “I pictured the trick in my head a thousand times, played as a film and I felt its was possible to pull it (the voices in my head told me, yes Adam you can pull it ahhahaha!.) So after 3 days of hardcore practise and hundred of tries it became reality. I pulled the upside down whopper that was one of the happiest days of my riding career.”

Issue 3 of ART is done and out in the news stands now, and continues to grow, more pages, more BMX, in summary not much flatland that sadly seems to be a commercial reality. At least ART covers flatland more than anyone other printed magazine.