When I hear the name, Aleksi Ritsila, I think about a new generation of professional rider, not in the dictionary definition, but defining the term “professional” by their riding level. I guess as I get older, I wonder more and more where the new generation will come from?
I realised as I started this interview with Aleski, that I didn’t know much about him, and he certainly hasn’t had much coverage, I recall an interview in Cream a long time ago. Recently Chad Johnston recognised his talent after his groundtactics entry, and hooked him up on S&M. This interview is broken down into two parts, where we openly talk about the competitive spirit, his influences,winter time in Finland, getting on S&M, failing to get a groundtactics final entry done, bike set ups, his future plans, without further due here is part one! 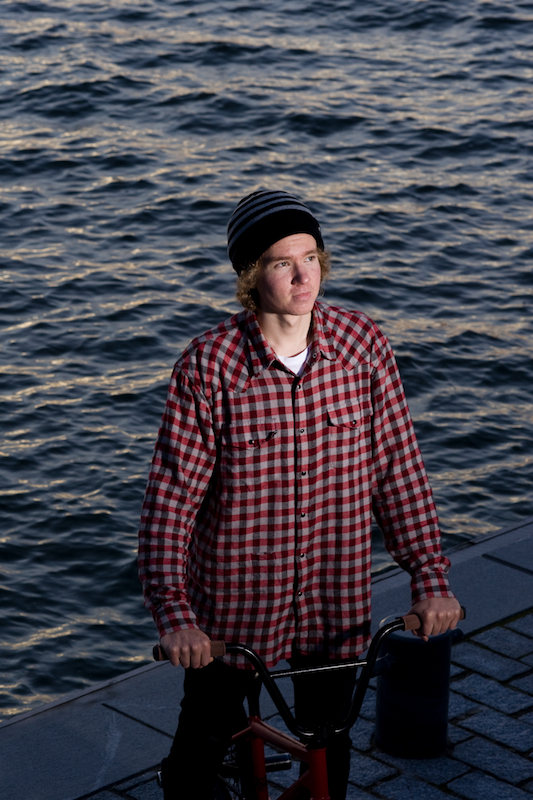 As I started work on this interview Aleksi, I quickly realised I didn’t know that much about you, so as boring as it is, whereabouts are you from in Finland, how did you get have into riding? and for how long have you been riding?
I´m from the city of Jyvaskyla, its about 300km north from Helsinki. When I was about 10 years old I started to find this whole bmx/skateboarding lifestyle cool, and eventually got my first bmx. We did some dirt, jumped curbs and shit… then maybe at the age of 12 I got into flatland. So umm.. that’s a bit over 7 years of riding flatland right now. I’m 19 years old now.

What was your first memory of flatland? What got you interested other just cool?
I think the first time I ever heard of flatland was in this youth magazine. There was a small interview of Kimmo Haakana, this was before i had got my first bmx. So I think in some way I was most interested into flatland in the first place, but decided to try everything. But it was just cool that I could do flatland everywhere, I didn´t need jumps or anything. And flat just felt most natural to me.

Do you see any differences in flatland since the seven years you have been riding?
First flatland event I´ve been to was the first flatstyles jam in Helsnki. It was pretty big jam actually and to compare it to this years flatstyles, I hate to think, but it seems flatland has gotten a lot smaller. Also there was x-games and all that shit back then of course hehe..

So do you think flatland getting smaller is down to not being on TV, or the loss of income to pros?
Hmm this is a tough one… Right now what I think is holding flatland down is the small amount of kids getting to it. The industry is stupidly small. But what has it taken to get us in this situation… yes, I guess it has alot to do with the lack of coverage we get. Just the way I see the industry working is kids looking up to pros, then buying the stuff the pros wear and ride, thus pros getting money, events getting bigger, then getting more coverage on media.. but has flatland ever had this. I don’t know…

It has in points had great times, X trials series/X Games, your native Martti Kuoppa did earn a good wage back then I’d imagine…I got sidetracked by your answer there Aleksi, time to get back on track, So in your earlier years did you get any kind of mentoring from Kimmo or Martti?
Yes from Martti! I saw him actually randomly in sweden. I saw his bike with my dad and we stood there waiting for him to show up hehe When he eventually showed up we had a chat he invited me to flatstyles. After that we were in touch every other month. He gave me advice in tricks, fixing bike.. He helped me to build a strong foundation in riding. I even got serious scuffing skills which is pretty random these days haha. Seriously I owe him so much, i had no idea for any technique before he´s help.

That is awesome! A good foundation is a great way to start and expand your riding. I’m kinda catching up with questions here so its a lil mixed up, random is good though! When I think of finland, i think of two things, cold weather and Martti Kuoppa? How hard are the finnish winters to deal with? I hear its pretty much dark the whole day at the peak of winter right in the north of your country, and reverse it’s light almost all summer, thats a crazy extreme!
Well here it is pretty much 6 months of snow. And yes you are absolutely right about the darkness and light. If you go to school or work, the sun is down when you leave home and its down again already when you get back in winter. it sucks. But summer nights are so cool, party all night long:) 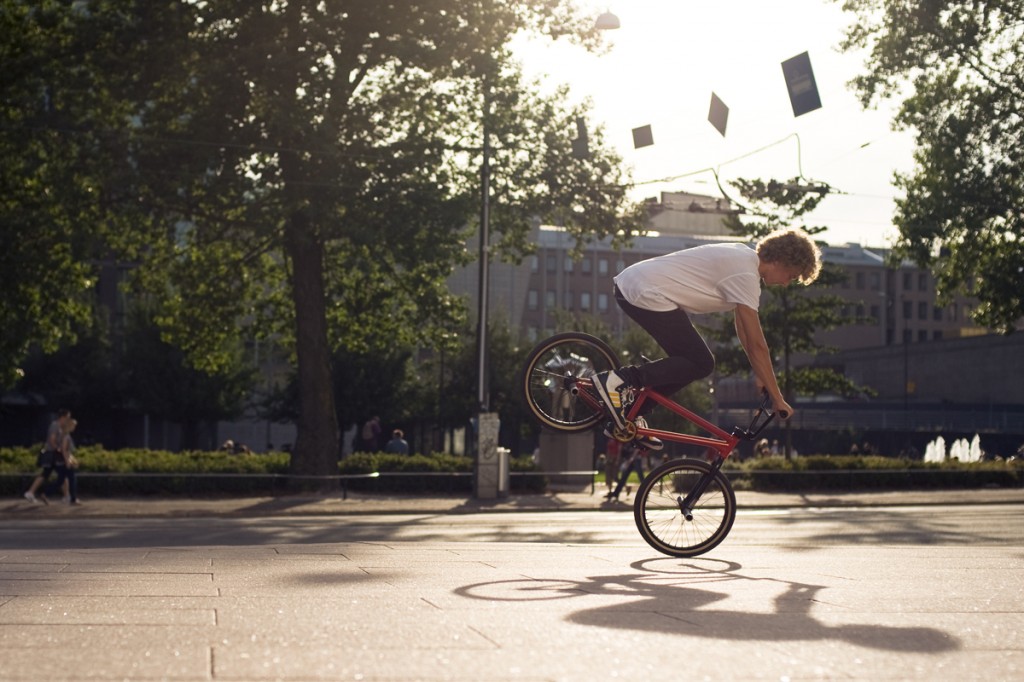 Wow, if I couldn’t ride during the winter, I would be out riding during the summer, I’d save the partying for winter. Do you have a winter riding spot?
Hehe. Yeah we have worked hard every year to have somewhere to ride during winter. Calling everywhere going to sports centres asking… Last winter i rode in this indoor skatepark building. the floor was so dusty and slippery i couldn’t pump any trick there for the first month haha, but I learned that sweeping the floor before and mid session is vital as well as softer tires. i hope to ride there this winter as well! Oh and I could ride there 5 times a week last winter which was the best of any winter so far!

That’s great at least you can ride! Whats your daily routine like? Do you work? Student?
I finished high school last winter. I was approved in this sports high school so it was pretty dope. I even could ride mid school days sometimes! Now I´m looking for a job for the winter. So this summer I´ve been just riding a lot thats my daily routine:)

How are your practise sessions, are you concerned with consistency, or always working on new tricks?
In the beginning of the summer i worked with getting dialled for bmx masters. I pulled pretty clean runs at my spot, but at masters only managed to pull one full combo haha.. After that it’s just what i have fun with. Some days its doing my “contest combos” over and over, but often its just trying some new trick over and over, and some times just doing silly new stuff and playing around which is really fun. Just trying to have as much fun as possible is my goal for each session right now!

The flatland world awaits the next generation of pros to come through the ranks, so that isn’t an ambition of yours? As you don’t attend many contests I noticed, the Masters once a year right?
Well I guess yeah. I´d love to go all of the contests but it´s expensive. Also the way I look at my riding is that I must have stuff that I’m really stoked on to have fun. Pumping steamrollers and timemachines isnt for me, even though I see people getting way better placings with that easy shit at contests. So going to contests takes alot of work so I can build a run that i’m happy, no repeation in combos, no filters… you know so paying for the plane tickets and sucking at contest is still always fun trip, but yeah hehe I´m working to get there at the top of riding, but to me the most important top isn´t at contests of today. not sure if any of that made any sense
hahah…

This year you entered groundtactics, and made the final cut. Then no final video, tell me about that process, of filming for groundtactics, did you feel some pressure to bring new tricks to the table for the final?
Yes absolutely! The same thing I said in last question is true for videos as well. I dont want any bullshit in any of my combos I want them to make 100% sense (to me at least haha). so doing an uncut 3 min video like this with new tricks.. i stressed out. round 2 was enough on my nerves, I have some damn funny situation on my camera of me getting angry on my bike while filming for it. I always also see everything so easy in my head and usually wont reach my goals because of it hehehe. So thats also why you haven’t seen any edits from me lately, i’m demanding perfection from myself and I want it to be filmed and edited well as well, different spots etc. And the funny thing is, I´m sure to most of you it wouldn´t make any difference if my combos and shit had some different easier stuff in there (some could like it actually more), but I don’t care about that. It’s all for me you know hehe..

I can relate to that. Being fussy about your riding is a good thing, its a positive/negative situation as your not in the public eye a lot… Speaking of which, The groundtactics contest despite missing your final entry, seemed to help you get on S&M right? So its been a positive development for you and your riding?
Oh man I´m so stoked on S&M!!! Getting flow from them is the biggest thing ever for me. Its S and fucking M, I can´t believe it, such an honor. Been a huge boost for motivation. They represent everything I love in bmx. I love their products, the frame is beast! I don’t care what people say the high top tube is the coolest thing ever!!! also Chad hooking me up makes it even better. I grew up watching intrikat videos over and over. If someone had told me back then this hahaha, no way I would have believed.