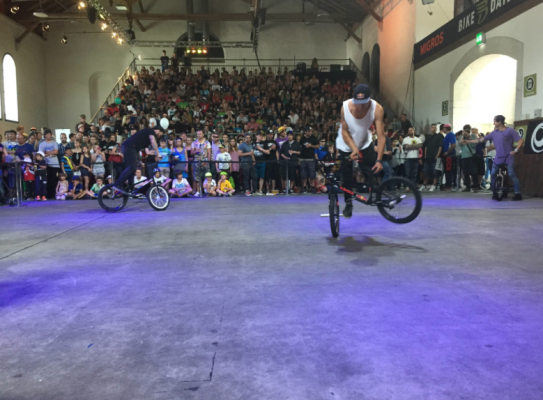 I just got back home from Bike Days with nothing but good feelings about this event. If you have never been to Switzerland, every thing runs like clockwork, everything is very clean, well signposted, lots of green countryside, beautiful mountain views, the people are very friendly and polite. It is hard not to love the place!

Yesterday was Pro finals day, and once again Dominik Nekolny was the first to the practise area to get ready for the contest. And he was on fire, I saw a few things that I hadn’t seen before such as xft hang tens mid xfted whiplashes after a 1 1/2 minute combo like it was nothing. I sat watching in the athlete catering area wondering if I imagined it, directly as I thought that Dom did it again, so ok whatever!

The atmosphere built up pretty quick with the finalists all arriving to get ready for the finals at 330pm. There was a really nice jam circle that went down with Matthias Dandois, Alex Jumelin, Naoto Tamaru, Dub, and Viki Gomez, if you didn’t know already Matthias is definitely back on top form. It was really awesome to see him just literally playing with the bike, back to back video tricks, and nailed a half cab 5 to manual 180 out during this session and all with a smile. Dub, Alex and Viki were all looking solid for the finals.

Finals were soon upon us, and the atmosphere was electric, the big bleachers were rammed, the sides all packed 4 to 5 people deep. It was definitely a good way to start the 2015 World Circuit, the format used was the same as at BMX Cologne last year, 3 minute run with a video trick after your time which could only bump up your score, not down. 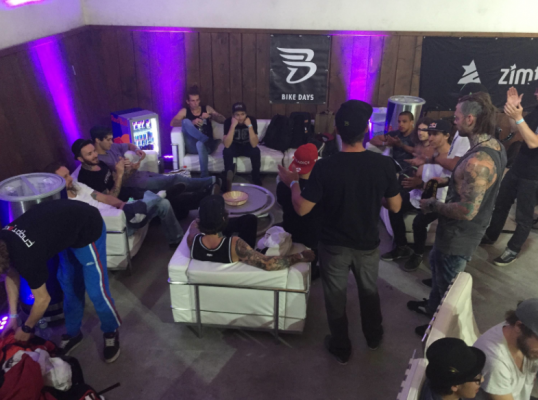 Oliver Muller and his crew ran a riders meeting before finals.

The finals started with a bang, Thomas Noyer had a really good run, nailing his signature fire hydrant one kick direct to backwards spinning half packer, his front scuff nose wheelie cross foot ankle death whiplash out, and his turbine front yard to xft body varial out, sadly Thomas didn’t nail the bonus round. But he set the tone for the finals, the energy went up. Next up was another frenchman, Joris Bretganolles, a back wheel killer, Joris destroyed the scuffless two footed dump truck body varials and came so close to his pedal time machine to two footed pedal dump truck, so close!

Next up another back wheel killer, this time all the way from Abu Dhabi, Japanese rider, Naoto Tamaru who really stepped up his game in the last year or so, his run had people on the verge of tears with his music and emotion he showed during his run. On this day it didn’t quite happen for him, but he did nail a couple of his combos and an amazing x-hand gliding junkyard bike varial to gliding gerator, Naoto was for sure a crowd favourite. I’m expecting big things from this style cat!

Jean William Prevost was up next and started out with such a high tempo, pivoting forward and backward across the while floor inside switch b style with so much aggression, the floor was cleaned really well right before finals and that no doubt allowed Dub to take things up a notch. The highlight of Dub’s run was definitely the bonus trick, where he coasted his signature Forklift across the floor and nailed it clean as first try, the arena erupted! Up until that point it was the loudest I heard all weekend, absolutely buzzing. Dub was psyched! 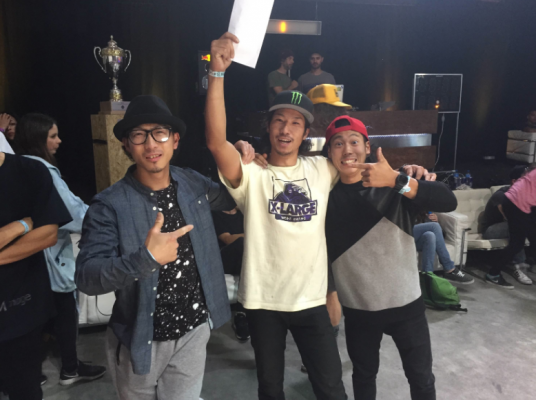 Moto took home an award for Most Memorable Moment, here sharing the celebration with Hiroya Morizaki and Naoto Tamaru!

Next up was a very hungover Kevin Nikulski, if James McGraw won the party Saturday night Kevin for sure got a close second. I also have no idea how if so hungover he still spins like a madman, and also I have no idea how he rides that Cult street frame like he does. It wasn’t Kevin’s day, but he’ll be back! Ton of fun hanging out with this guy all weekend, always having a good time and cracking jokes. Good vibes!

After the fifth rider, the top 5 got a lil’ warm up. Dominik Nekolny was next up and as always came out swinging, long x-ft hitch juggler whip to half packer combo to start and out clean, the run was going really good then missed a few times his xfted double whiplash combo. For his bonus trick I wasn’t sure what he was trying but it looked like opposite xft whiplash to xft hang ten one handed, from there maybe to crackpacker I don’t know if he would have nailed that that really would have bumped up his score. Much respect to Dom who gives it his all, sometimes it happens fro him sometimes not, true athlete!

Alex Jumelin was up next, nailed his nose manual 3 nose manual, his signature xft inside steam with foot under chainring, but a few mistakes plus missing the bonus trick hurt his score. 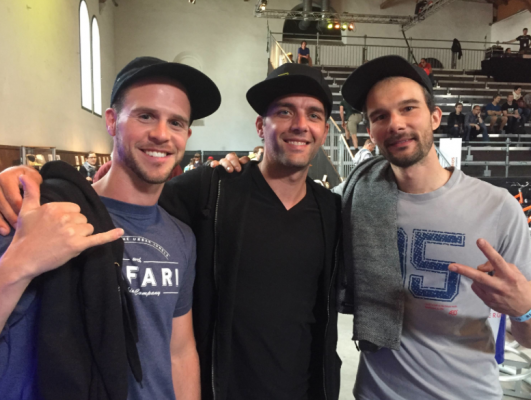 Viki Gomez looked like a man on a mission as he rolled into the arena and so it proved. Viki really raised the bar, 540 pivot to forward g-roll, nailed, steam kick flip half packer, nailed (second try), and nailed his bonus trick opposite pedal g roll pivot to xft pedal time machine which really bumped up his score with he, Moto and Matthias being so close in the scores and proved to be enough to take the win. The arena was absolutely electric, Viki’s slower style seemed to work well in the 3 minute run format, as he able to pace himself between each combo, just a small observation I made.

The last two riders left, Moto Sasaki and Matthias Dandois tied for first, expectations levels were high, what would they have in store. As I already mentioned Matthias was on it, he hit his no handed half packer spin so fast I thought the crowd was going to explode, as the sun shone outside a area of the floor lit up which I’m sure messed up a few of the guys (if you take a look at the videos you will see what I mean. Matthias hit a really nice x-hand inside steam flip to spinning half hiker to finish off an explosive half cab 3 combo and his signature backwards spinning xft ice cream. Sadly for Matthias he didn’t get his bonus trick in the allocated 3 tries, but did land a half cab 5 manual to 3 out! Whatever, it was such a good moment. I feel like I said that a lot already over the course of the weekend.

Moto Sasaki was the last rider, could he match his amazing flawless qualifying run and nail his bonus trick? Moto came out hot throwing down his first few combos one of which ended in xft pedal 5 half bar flip out, and also his signature one foot backwards spin to crackpacker jump to front wheel and out, stomped! A small crash and just coming off his spinning pedal circle k and missing his bonus trick took him from taking the top spot! Moto did win an award for Most Memorable Moment and took home an additional 2000 Swiss Francs, not a bad days work is it?

So Viki was the winner of Round 1 of the World Circuit, the format worked well in the final and really gave the spectators some added excitement not to mention a chance for the riders to really step up their score if they touched a lil’ in their run or add to an already clean run! Much respect to all the organisation, Fabienne Lovece, Oliver Müller, Marco Vetterli and everyone else involved, it was a lot of fun judging this event. I can honestly say this is one of the best events I have been to, great floor, good organisation, nice town and culture, bikes everywhere, athlete catering, fun parties, what else do you need!