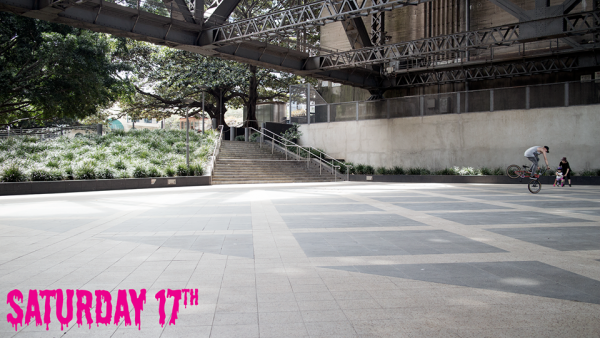 Paul Chamberlain hit me up with some jam news for the Australian scene and all I could think of was why would you look at that riding spot?! Here’s what Paul had to say:

“We’re going to have a bit of jam on February 17th at this spot. No prizes, no schedule, just riding. Erik Laev is in town. That’s him in the picture. He’s got some amazing tricks and it’s always good to hang out with someone from another scene. He’s so far away because I wanted to capture how epic the spot is to show people that it’s worth travelling for. We rode here once years ago, but it was dirty and we never went back. It’s clean now, and it was sick today! We must be crazy to not have given this spot a second shot! Flyer doesn’t have much info, so just tell people to hit me up. It’s under the Harbour Bridge, it’s called Bradfield Plaza.”