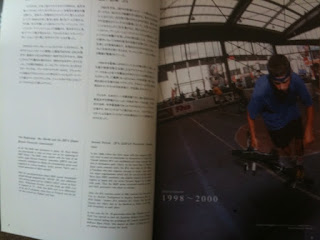 It is widely regarded amongst flatlanders that Japan leads the way in flatland culture, jams every weekend, the sheer number of riders, flatland only shops, awesome spots, independent flatland contests and of course the King of Ground series, Yasu, aka Green G, the producer of the King of Ground has put together a beautiful booklet celebrating the ten year anniversary of the KOG series.

Whether you’ve been to Japan or not, you will have at some point been inspired by the riders and the scene there, the Flatland Manifesto videos spring to mind in the earlier years,we saw new riders with fresh ideas, Shane’s videos helped expose their scene to the rest of the world, now in the modern day, there are countless you tube videos and websites/blogs that pop up from Japan. And this entire scene is built around the KOG.

The book focuses on the riders and personalities that have contributed to ten years of the KOG, with great insight from the likes of York Uno, Takashi Ito, Kotaro Tanaka, Akira Okamura, Yammer, Hiroya Morisaki, these riders are collectively referred to as the “top six”, who not only competed worldwide regularly around 1999 onwards, but have contributed to the KOG during the last decade. 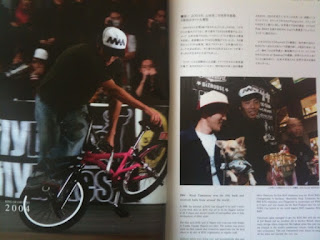 Takashi Ito discusses how the KOG began.. “Everything started with York’s misunderstanding. His positive speculation and action actually drove the idea forward. One day, I talked with Kotaro (Tanaka) and said something like, “I wish we could have the Japan flatland championship”. This was a mere “pipe dream’ of the Japanese bmx scene. York called me a couple of days later and said. “I heard you guys are coming up with a great idea!”. His misunderstanding drove the “pipe dream” to reality. It was a time when we could have a new perspective since all our mission was only in he improvement of the riding itself”.

Interesting to look back at the introduction of the battle format, Yammer’s domination worldwide, the effect Nathan Penonzek’s visit to Japan had on the riders, was an interesting one for me “The first and most memorable winner of KOG was Nathan Penonzek (Canada). It was very valuable for Japanese riders to see one of the world’s top riders with their own eyes as their was not much information on BMX let alone having an Internet. Nathan lived up to their expectations as he rode with explosive skills and incredible consistency”. 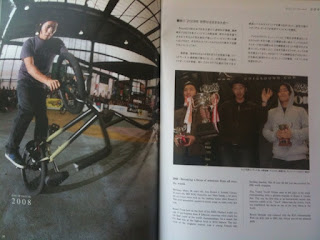 I found this book motivating, just how a group of riders made this happen, it makes me think what you can do in your scene, if you combine and get together with other riders, food for thought. I know there a lot of riders there, but the constant motivation for many surounds these KOG events.

The chapters continue on in the KOG story with Round 2 and 3 (the final of the world circuit fast approaching), these riders have made their dream reality, Ten years of KOG. Respect! What will the next ten years hold? What’s your dream? Make it happen!