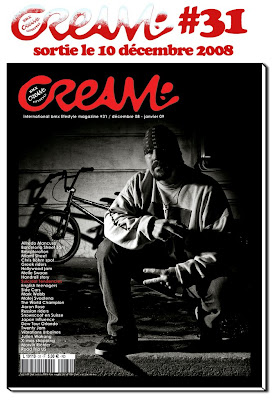 Issue 31 of Cream is out now and has some great flatland content, as I previewed it recently on this blog, I will keep this short and sweet and just to flatland content..

– Portfolio with Love Bmx’s Matej Svadlena, great shots of the Czech scene.
-Double page spread on the 2008 World Circuit champion, Matthias Dandois, he talks about how he got to this point, and the need to get new ideas, new tricks for next year.
-Fashion shoot with Alex Jumelin driving around Paris in Ferrari’s, Porsche’s courtesy of InsiderCars.
– Double page spread on Chris Bohm’s home flatland spot, I guess everyone has dreamed this, but Chris is doing it.
-La Gazette- The journal of the Bmx rider is probably my favourite part of this issue, covers: The Hollywood jam, Great interview with Michael Meza from Costa Rica (Ticos jam..), Report on the Trex games in Korea, Green G’s reports on the KOG finals (sadly not more coverage on the KOG finals).
– Three part Special feature on the Top 6 who have paved the way in the Japanese flatland scene, this issue concerntrates on Takashi Ito, and York Uno, great photography as usual from Green G.

Overall, a good issue from the guys at Cream, as always more flatland content than anyone else. Expected more coverage on the KOG finals, and the bad thing tour, if Cream doesnt cover the KOG extensively who in the mainstream will?

Cream is available from FF, off Ebay, Borders…

– Simon O’Brien is back in Australia after 11 weeks in Japan, we bumped into Simon and Mike S at the KOG finals, those two have been doing shows at the Tokyo Disneyland, in front of the castle, pretty good gig if you can get it! Simons planning on hitting up the first KOG of 2009, and is hoping to complete his solo dvd later this year.

Happy New Year to all blog followers and stalkers (those havent registered).

Im off for a sesh.

2 thoughts on “Cream review + some news”