There’s a lot of talk amongest many flatlanders about riders stepping up to the top pro level, where are the next big pros coming from, where is the structure to see this happen, Dez Maarsen would be a classic example for me of how important structure and having events are, he grew up  with Flatground on his doorstep. Dez is on the come up, improving every year I see him, without further a due, heres the interview, read on..
It seems like you made it to the top level of the sport very fast, how long have you actually been riding? And describe if you can how you made that journey to being pro?

I started out riding flatland in April 2003. The dutch scene was very strong and a lot of sessions and progressing riders were around. And of course Flatground! All the riders where young and progressing a lot, and since i’m very competitive I pushed my self in to learning new tricks. 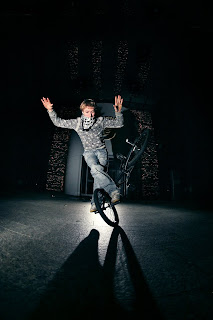 What were your inspirations growing up towards being a pro rider?
The most inspiring things were the big competitions. Flatground and the BMX Worlds and BMX Masters. I think the best was to see all the big pro’s in real time back them since the internet wasn’t so big as it is now. I think nowadays people rather look at the footage of a contest or jam then actually being there. 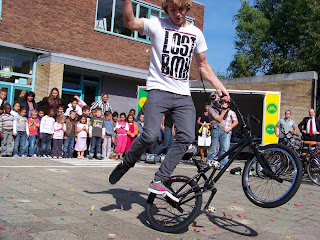 I notice on your videos, you are lucky to have an indoor spot, as Im guessing the weather in Holland is similar to English weather, tell me about your indoor spot, how did you get it, how many ride there? Can you ride daily?
Our indoor spot is a blessing! Its in the basement of an old taxs office. My brother lives there against squatting. So we can ride there 24/7. We can ride there for another 3 years, so we are pimping it up so it looks better for the upcoming winter.


You seem to be one of the active riders in Holland, now running lost bmx, what is lost bmx, what do you guys do?
The amount of riders in Holland has dramatically became smaller! So we try to stay strong. We get together once in a weak to just ride or when we have a show to rehearse it. And when there is a flat comp we are getting involved to get everything running. So hopefully in the future we can organize our own competition.


How hard is it to be a pro rider coming from Holland?
I don’t see my self as real pro rider in the sense of paying bills. More like semi-pro. Through these years I have been very lucky to get money out of shows. But I can’t afford to go to to many competitions, since I don’t have a big sponsor. So since I’m the first rider from Holland it’s hard to get the connections to make it as a real pro.


Tell me about flatground, and what that meant to the dutch scene and yourself personally?
Flatground was the thing that really made me fell in love with flatland! I still had a street bike and went there in 2003. On my way to there we met Michiel the flatground organizer. It was so big and there was also a good scene in my city and everyone was just there! The vibe and the set up was so good that was really how flatland was supposed to be represented! At the next Flatground I think I (2004) made some kind of debut because everyone remembered me as the small kid in the red pyjama’s and the red bike! Even Martti came to me then to give props. These were wonderful times! I think nothing can surpass flatground 04. 05 was nice but the breakdance, the time of the year and the two different areas messed up the atmosphere. The thing that really then killed Flatground was switching it to a different area. But it’s really to bad it is gone instead of that it learned from it mistakes. And of course the love for flatland wasn’t there anymore for Michiel I think. 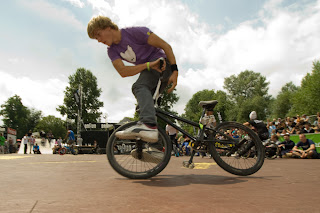 I would agree with this Dez, flatground was a hardcore flatland event, flatland needs events such as fg in order to grow, i think its especially important for your scene, a chance for dutch riders to see international riders on their doorstep, and much motivation.Bram Verhallen was for many years seen as the top guy in the dutch flat scene, now its yourself, do you feel any responsiblity with the scene, like rolemodel for younger kids and stuff like that?
I think you don’t choose to be a rolemodel. James Alberto is still our flatland Grandad. I’m just trying to represent flatland as good as possible, because that is where my heart is. And since i’m still young and learning a lot myself I don’t think im ready to be a rolemodel.
With regard to being rolemodels, thats a tricky one, I think once you reach a certain riding level, you become a rolemodel to people, i know when i think of holland, I think of you now Dez, when it used to be Bram, its a natural thing, so i’m sure many riders in Holland look up to you.

Do you have sponsors who support you?

My sponsors right now are Kunstform and Rattaplan. Adidas also supported me with some stuff and shows.


What events you planning on hitting this coming year?
Upcoming events i want to hit are Circle Cow, Game of Skils, Barcelona Extreme, BMX Masters and hope to travel to more comps once i have my drivers license. 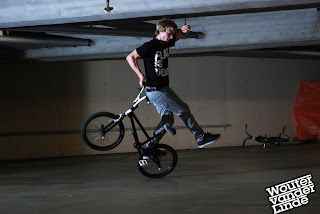 What’s your opinion about modern day flatland? There seems less and less core events..
I think its a shame that the level of riding really progressed, but the sport is only getting less recognized in big events. If you compare it to the days when flatland was still in the X-games and that now one is trying to get flatland back in major xtreme sport events. Flatland became to underground and the only way to get it recognized by big sponsors is to get it back in this kind of events. In flatland the best sponsor you can get is Red Bull, while in Park if a rider isn’t sponsored by Red Bull, he’s sponsored by Monster or Rockstar. There is no brand fight going on in flatland. Bike brands used to want the best riders and the new talents to represent them and competitions, now a days most of the bike sponsored riders don’t even show up at competitions (look at the KHE team). The “A Bad Thing” team is dominating all the competitions and they make the most crappy parts out there and are “bad” with warranty. Kgb is dead, does Quamen still have a team? St Martin only sponsors non-competing riders excepted for the Japanese team (but Japan is a total different planet).We need a organization that is focused on getting flatland back at big events and represents it good and in big events like the worlds/masters. Because i don’t think there is anyone really in the commission of the IBMXFF or what ever organizes the BMX Worlds/Masters. You always seems to volunteer. I think I could write a book about it so i’m going to stop right here.


Interesting points Dez, as far as I know to answer your questions, myself and my dad offer to help out with the flatland at the masters/worlds, otherwise i’m not sure it would happen as smoothly (this last year was not smoothly i’d be the first to admit, but almost 95 percent is out of my control), lot of factors against us which I had no idea about, 1) no tent 2) the haro show took priority over the flatland…3) Organising the worlds needs more organisation on a level where judging criterias are displayed at least six months before so the riders know what to practise for. Like you say you can write a book, so many factors of the sport are unprofessional.
What is good, is that flatland is involved in the rest of bmx, we wouldn’t have a big section on props 74 for example, if that was a flatland only event…Also…
For me the haro show was great and all but you have to ask question, what’s the real priority at the worlds, surely to hold the world championships!!!