First of all, I  would like to thank to Effraim for giving me this opportunity to introduce one of my best friends/ favorite rider to the world.

I first met Eiji Kataoka was at the western canadian flatland jam in Vancouver Canada in the summer of 2006. I was blown away by him riding with full of energy and positive attitude.  We spent only about 10 days together there but since then we got really close friend.  We have many common things flatland, lifstyle, stratism… From my view, he was one of top riders in Japan at the time. All of sudden he stopped to participate flatland events and went deep underground since 2006… I was curious about this guy even we are good friends, living far each other I don’t get to see him. I decided took a trip to Osaka where he lives and took a little interview and filmed his riding a little.

I hope you enjoy this interview as well as flatmatters exclusive Eiji’s edit.

Tell us a little bit about yourself. Where in Japan are you from and how old are you?
Hey my name is Eiji Kataoka from Osaka Japan. 24 years old now. I’m gonna go to Melbourne Australia for 1-2 years with my girlfriend. Stoked!

How long have you been riding and how did you started riding flatland?
I’ve been riding for 10 years now. When I was junior high school kid, my school buddy group started skateboarding and I did too.But i was pretty bad at it. And i just wanted something different from em. I got feeling like “cool! looks pretty easy” When i  first saw bmx flatland. That freaking idea made my way. I’m totally lucky, I mean can’t even imagine what’s up if not starting BMX. can you?
Yeah, I feel you. Our lives without flatland…. it’s nothing!!
Yeah, that’s what I mean. I had many riders I looked up to. Because my local scene was really Dope. Many riders, styles, personality you know. I strongly respect all of riders from my locals. Especially Kenji Horikawa who had belonged to Ares bike back then. He was my teacher. He showed me how to enjoy and share this joy with many people. He cheer me to be professional BMXer

You used to compete pro at KOG and all of sudden you disappeared from contest scene.Why was that?
Yes,I was competition freak boy.I did all the time also attended some competitions in foreign country.These experience changed my idea and lifetime going on different way “world wide”. I had been in Vancouver after that. reason is like” love,trust,believe” what I feel. Just wanna fun.haha.. That is reason why disappeared suddenly from Japan.Honestly honestly speaking, I didn’t have confidence to keep pro license at KOG too. haha. 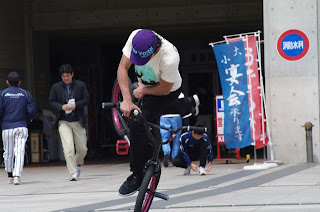 What makes you to go to abroad? You used to live in Vancouver Canada and you are moving to Melbourne Australia. Why is that?
It’s all simple like, just wanna experience a lotta things all over the world. I got positive hunch to it.
I can’t explain why that was Vancouver. Just a whim i guess. I wanna enjoy feeling something, touching, looking, hanging out and inexperienced stuff.
Have some fun. I’m on my way. I’m stoked moving to Australia!

You came back to KOG last year and competed, any thing changed your mind?
I just realized that Japanese flatland scene is fucking dope super high level of riding, lotta good riders big association. If you interested in KOG, come and see it for yourself.

How did you like Vancouver? and who did you ride with when you were in Vancouver?
Vancouver is fuckin’ awesome city man.
You can be as happy as you want to be. I mean Vancouver has got everything you want.
I love Vancouver so much. You guys all should visit Van!

Talking about Flatland, Vancouver Flatland scene is pretty tiny. But they ain’t influenced by popular tricks. They keep goin’ on their own styles.
“Cory Stratychuk” He is a very nice guy.I hang out with him a lot like everyday.
His riding is very original and freaking crazy no doubt…

List your favorite riders, If you chose top 5 who would that be?
Oh- this is big one.Very hard to list. I mean I have so many riders that I respect.
It would be Cory Stratychuk, Cory Fester, Peter Olsen, Stephen Hearn, Yosuke Sakuma for now. They have got very innovational original styles strongly.

What about tricks, you are the guy who invented no handed spinning crack packer with pumping as far as i know. is that right? when you first did the trick in front of people? Did you name the trick? and how do you feel about your trick has been done by so many riders. I saw Trever Meyer was even doing that.
Yes,I did as far as I know.But who knows?World is big, might had been done by others.
I practiced during spring time and Cherry blossoms were at the best in full bloom. My trick looked like dancing. That’s how I named it.
This trick is created by 2 elements which is someone’s original move x 2.
I  had both of trick, so pretty easy to think out this trick.
My idea at that time was original x original = super original.

When I first did the trick in front of people was KOG 2005 or flatground 2005 I guess.
I received many praise for that trick by many riders, they made my day
But otherhands I figured this trick was ganna be used and evolved by many people.
And then my guess cames true.That’s reason why I don’t do that anymore.Still I’m very proud that many people doing this trick though.
Now there are bunch of good riders doing “sakurano-mai”, stoked how this trick is going on. 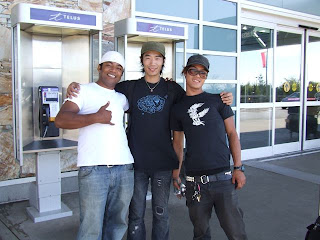 Do you put concept on your tricks?
Well… Yes and no, I don’t think concept comes first, I usually get some kinda nice single trick or flow thing first, and then i make up combo wiz some concept.
Also If i settle concept first,That would be airless with this.I just wanna have inner reserves of strength.haha.

Do you have goals for riding?
Yes, I do. I just wanna figure out my own direction.
And keep riding as long as I can.

Anyone you want to thank before you leave for Australia?
I wanna thank to my family, my girl friend and my local riders, all riders I’ve ridden wiz.
Special thanks to interviewer Taku one of my best friend and flatmatters.

Any last wards? if you forgot something to say
Don’t throw your bike.haha.
＋May Peace be in the World