If your like me, you placed an order this year from flatlandfuel of whatever bike part you were after, and received a free flatland calendar with your parcel! I was pretty stoked on this, and it’s placed in my kitchen as a lil’ motivation every morning I wake up. It’s about that again with the 2011 calendar dropping this week. I’m stoked to say Fat Tony is giving flatmatters a lil’ exclusive insight into the calendar this week. I hit him up with a few questions, check back tommorow for some exclusive insight to the behind the scenes shots! 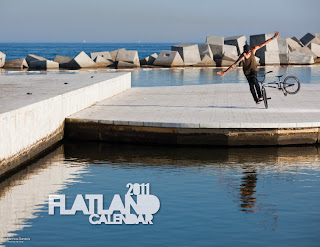 How did you initially get the idea for the Flatland BMX Calendar, and how long have you been making it?
I actually made my first calendar way back in college in 2006, but that was a Louisiana BMX calendar with street riding, racing, dirt jumping, ramp riding, and flatland riding. That was a personal project spawned from a graphic design class assignment, then carried out and distributed through the Web site I ran at the time, louisianabmx.com. I thought it was a cool way to incorporate showing off my photos and graphic design work together, while giving my friends and the riders in my area something that they could hold on to and appreciate, and of course be a part of, since they were the ones in the calendar. Fast-forward a few years and in mid-2009 (by then I was already working at Ride BMX Magazine with a simple email Pat Schoolen at Flatland Fuel planted the idea in my head that it would be cool to make a calendar using some of the flatland photos I shot over the years. I quickly ran with the idea and managed to execute it pretty well in a really short amount of time. And now here I am dropping the third Flatland BMX calendar with Flatland Fuel as the distributor.

Do you have contributing photographers, or did you shoot all of the photos?
Each year I’ve had a few contributors, which has been awesome. I think it’s really cool to get photos, riders, and photographers from all around the world involved, and they all seem stoked on it, too. Plus, since the calendar is paid for by sponsors (so it can be given out for free), having contributors allows other brands and companies to be able to be a part of the calendar, which allows a more diverse group of riders to be shown in it. It wouldn’t be doing the flatland community justice if I shot all the photos myself, but luckily I do get the chance to shoot with a good range of riders throughout the year during my travels around the world, so this year a total of seven out of the 15 photos are mine. In addition to the contributed photos, for the past two years I worked with a flatland rider in Argentina named Gustavo Pohle who came up with the initial design concept and typography treatment for the calendar. The calendar as a whole is definitely a group effort.

Who is supporting the calendar financially?
All the brands that sponsor the calendar pay for the costs associated with producing it, which, again, allows us to be able to give out the calendar for free to the riders. I’ve always loved getting free stuff, so I also love to be able to give other riders free stuff… This year we had a handful of companies that have been on board all three years, a few that were a part of it last year, and a few more that this is there first time supporting it. It’s really cool to switch it up and be able to have new brands and riders shown in the calendar, and I’m always stoked to have the continued support from the brands that help out year after year. This year the sponsors are: Flatware, Ares, KHE, ID Clothing, Quamen, Saint Martin, Hoffman, S&M, Mankind, DK, 430 Clothing, Innertwine Clothing, Suelo, and of course Flatland Fuel. Everyone should support these companies because their help with projects like the Flatland Calendar helps keep flatland growing. 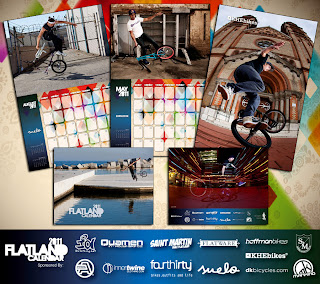 Do the sponsors decide which riders get featured in the calendar?
Yes, and no…it is always a case-by-case basis. This year each month in the calendar is sponsored by a different company, and so is the poster in the back. So the rider for each page is representing those brands that they are shown next to. However, with every company it was a different scenario. Some companies went with the photos that I already had, like Suelo and Viki Gomez. For others I was able to set up a photo shoot specifically for the calendar after the brand said they wanted to sponsor it, like Chad Johnston with S&M. Chad lives next door to me, so that makes things pretty convenient, haha. And others were a bit more of an ordeal, working with the company in one country (and sometimes a photographer and rider in another country), trying to make it all come together. So in the end each brand got their riders and logos where they wanted them, and everyone was psyched.

How can someone get hold of the calendar?
Each of the companies that sponsor the calendar has a handful of calendars, so it’s up to them to decide where they send them, or how they hand them out. However, most people will get theirs from Flatland Fuel. Every time you buy something from them you will receive a free calendar with your order until all of them are gone. Also, I will bring some calendars to the first couple of flatland contests in 2011 as prizes and giveaways.

4 thoughts on “Fat Tony gives FM the lo-down on his 2011 flatland calendar!!”