Yesterday we dropped the news on the 2012 Flatland Calendar, today we interview Fat Tony about the calendar, and Fat goes through some photographs that didn’t make it! Without further delay, let’s crack on with the interview and some of his photographs! 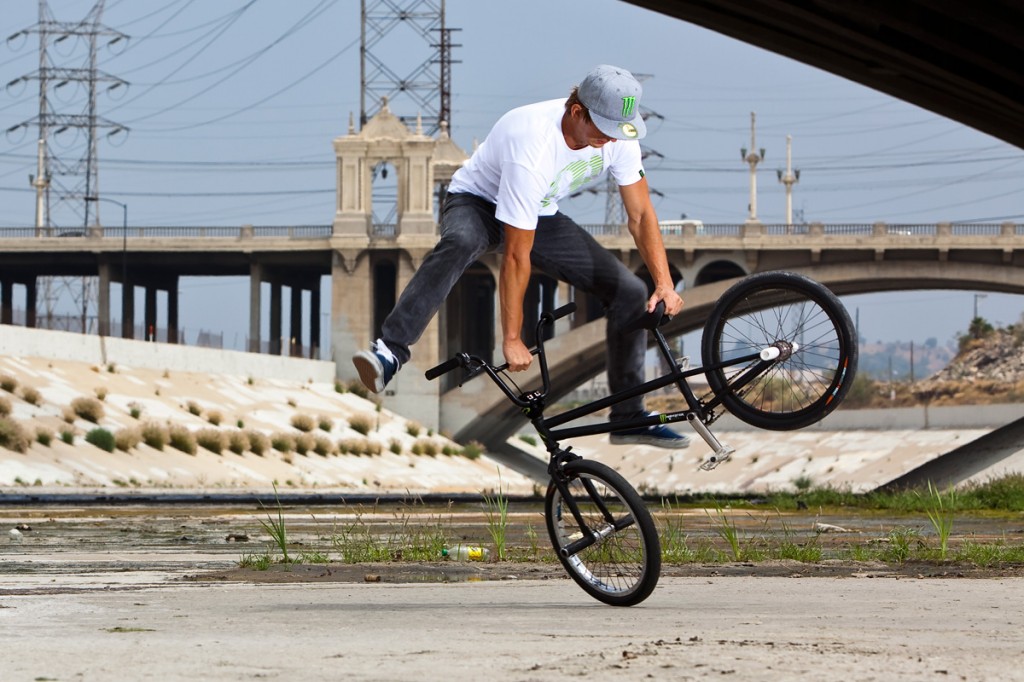 Adam Kun
When I met up with Adam Kun in So Cal to shoot a photo in the L.A. river bed he wanted to shoot this trick first, but after we shot it he decided to shoot his Monster whip, too. I was more stoked on the Monster whip photo, so this one never got used.

How long has the calendar concept being going for now?
I made the first calendar at the end of 2008 (for the 2009 year), so this is the fourth year in a row I’ve worked with Flatland Fuel and a bunch of rad BMX brands to make the project happen. I couldn’t have done it alone—from the companies who support it, to the other photographers who contribute, to the riders themselves; it’s definitely a collaborative effort.

The calendar is separate from your work for Transworld; tell me about your motivations to get this calendar done every year?
Yeah, the Flatland Calendar is totally different from anything I do at Ride. I think everyone that works in a creative field needs to have personal projects outside of their everyday work that keeps their creativity flowing and helps push themselves in a different way than their normal work does. So that’s a big part of what this project is for me—just a way to push myself as a creative person. Also, the response from the flatland community over the years has been incredible, so that’s definitely motivating. And I guess another motivating factor would be just the sheer need for something in flatland for the riders. There isn’t much out there specifically for flatland, so it’s cool to be able to contribute something to the global flatland scene.

How many copies of the calendar go out?
A total of 2,000 will go out this year. Each company that sponsors the calendar gets 50. Sometimes they give them to employees, send them out to shops or jams, or put them in with orders they ship—it’s totally up to each company to decide what they want to do with them. The majority are at http://www.flatlandfuel.com

Where can people get the calendar?
Any time you place an order with Flatland Fuel they will throw one in for free. But don’t try to be a cheap skate and just order a tube or something to get a calendar, haha!

When will the calendar be available?
They are already shipping with orders at Flatland Fuel, so get on it! 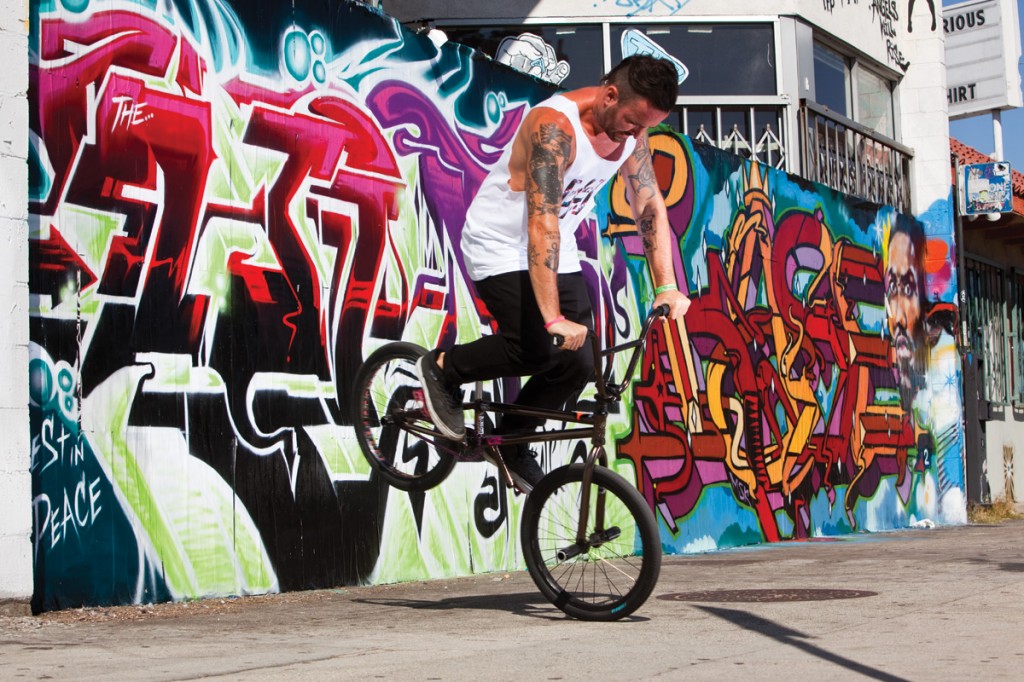 Alex Jumelin
Alex Jumelin has been to the U.S. more times than I can count this year, but somehow it never worked out for us to shoot a proper photo. Once we finally got the chance we were super pressed for time and couldn’t find a location to shoot at. We literally only had about ten minutes to work with, so we used this random graffiti wall on Melrose Ave. as a backdrop and shot this carving nose wheelie before we had to pack it up and head out to the Soulstyce contest. Unfortunately it didn’t work out for Alex to be in the calendar, so this photo was pushed aside. 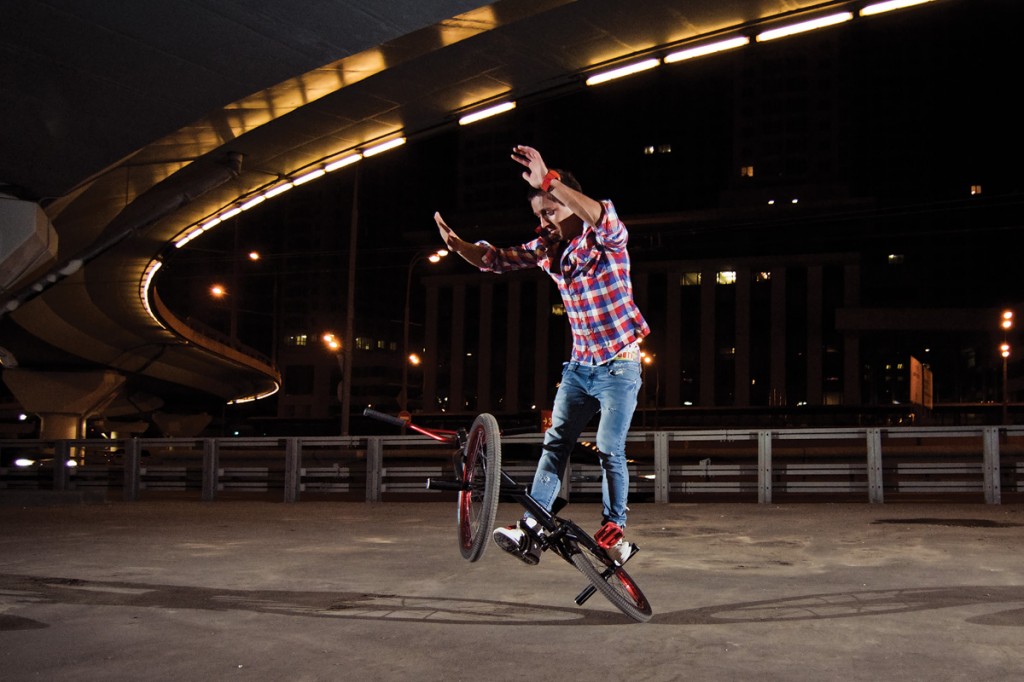 Alexey Proshin
Alexey Proshin out of Russia was so pumped on the Flatland Calendar last year that he sent over a few dope photos that were shot by his friend Alexander Popov for me to use this year. However, the calendar was alrady full, so unfortunately there wasn’t any room for this one. 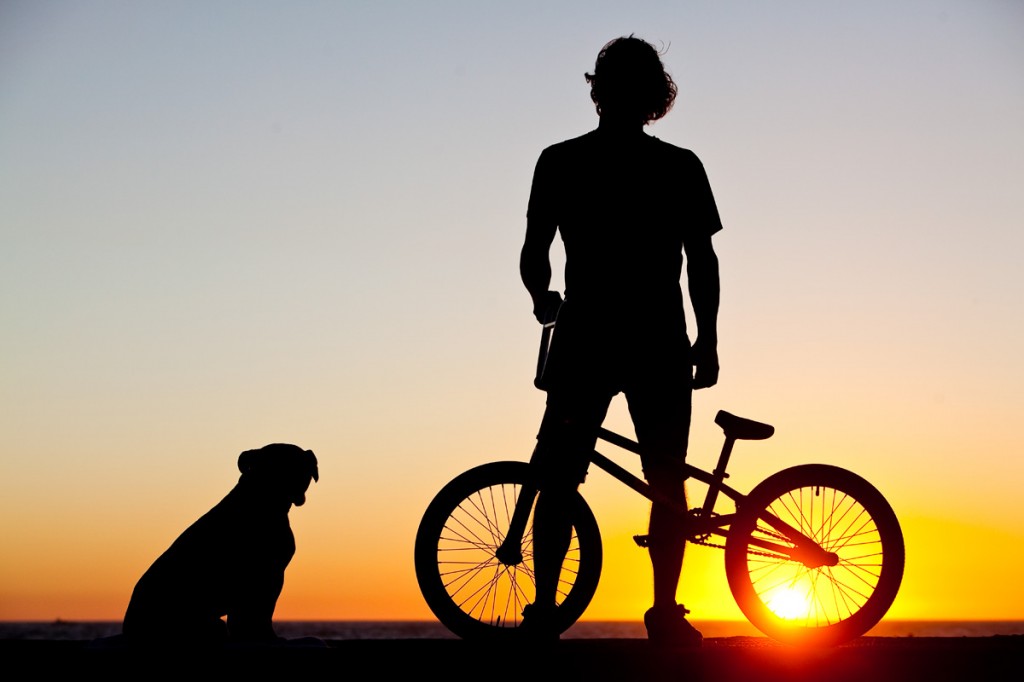 Bo Wade
Here’s a nice looking lifestyle shot of Bo Wade and his dog Dakine I snapped while focusing for his shot that got used in the calendar. 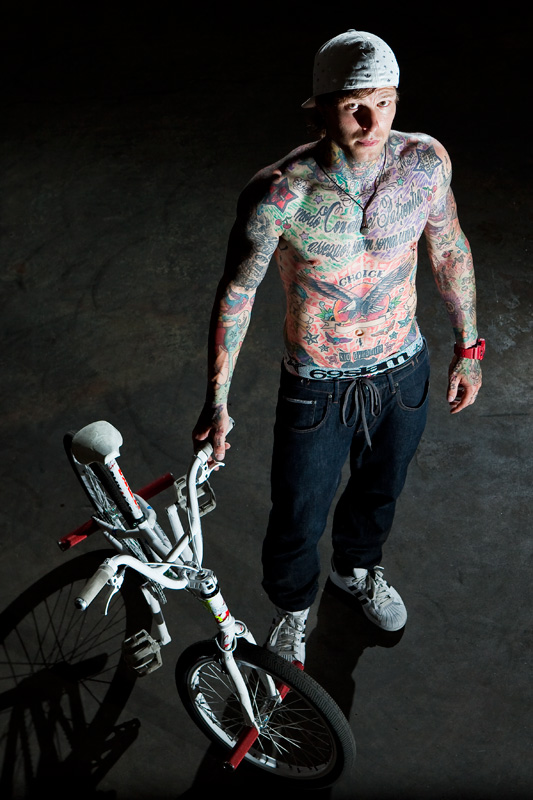 Dominik Nekolny
Here’s a lighting test shot of Dominik Nekolny I snapped while setting up for his photo. This was taken during the weekend of Red Bull’s Battle At The Bricks contest in Indianapolis earlier this year. I got to hang out with Dom quite a bit that weekend and had an absolute blast with him. 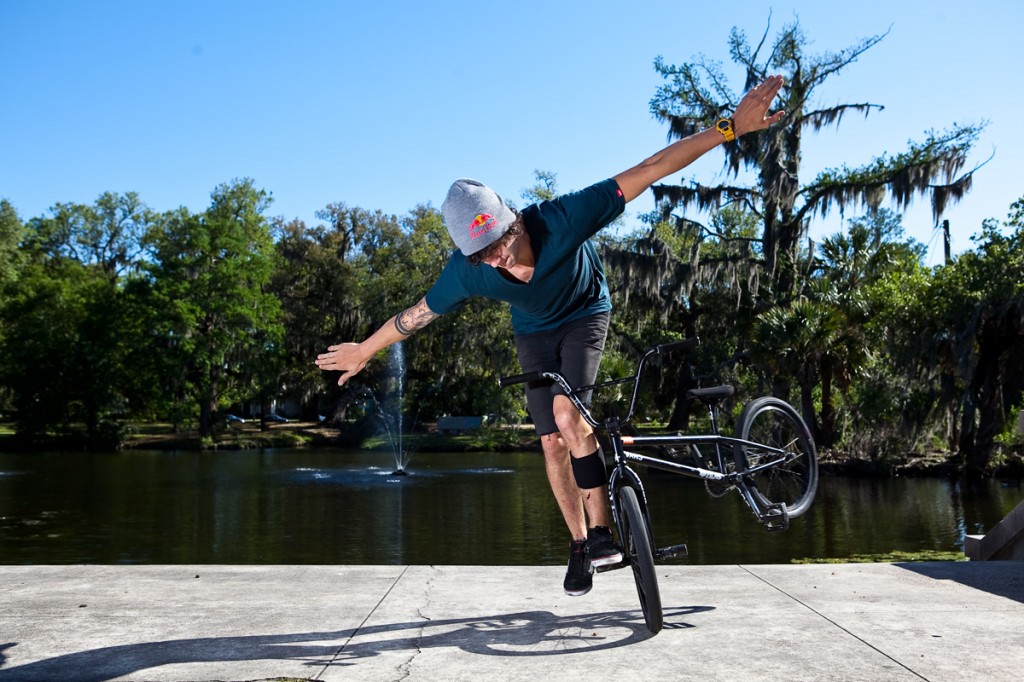 Matthias Dandois
When Matthias Dandois was in Louisiana this year right before JoMoPro we were trying to shoot as much as possible for an interview on the Ride site and this photo, along with the one that made it in the calendar, are the two that didn’t get used on the site. This one was shot just a few feet away from where the one that got used was shot, but they look so different you’d never know it. This is also the same trick that Matthias was doing on the cover of the 2011 Flatland Calendar. 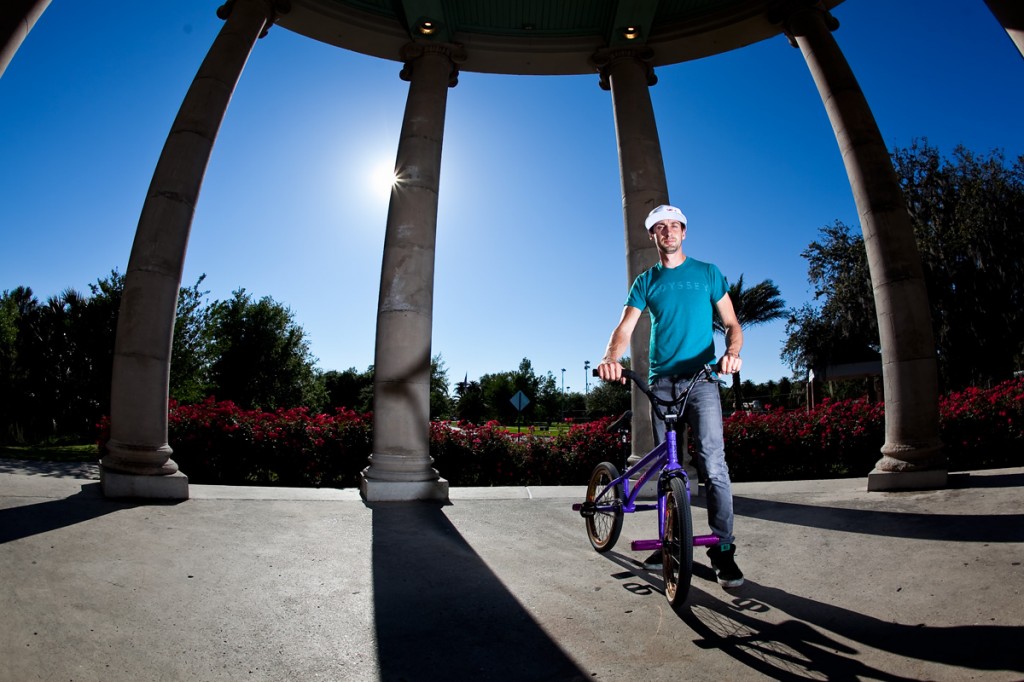 Terry Adams
Here’s another lighting test shot. This one is of Terry Adams at one of his favorite riding spots in his area—City Park in New Orleans, Louisiana. 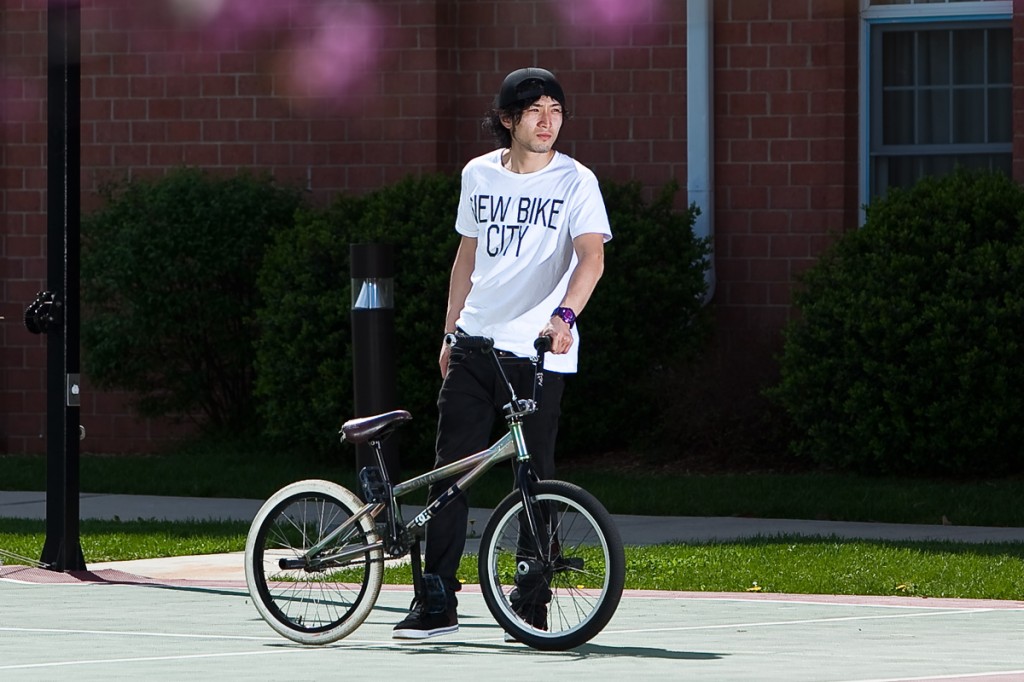 Tsutomu Kitayama
You always end up getting pretty cool lifestyle portraits of riders when you are setting up and testing your lighting. This one is of Tsutomu Kitayama taken just a few days after the tsunami hit his home country of Japan this past April.

2 thoughts on “Fat Tony talks about the 2012 Flatland Calendar!”