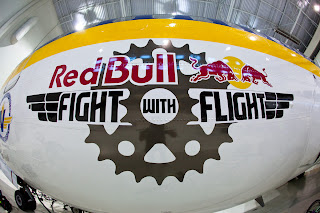 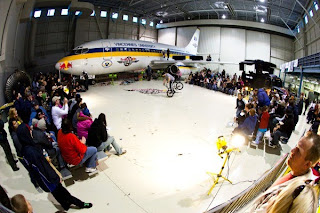 While most of Indiana is preparing for the Superbowl, myself and many other flatlanders from around the world converged on the Vincennes University Aviation center for the second annual RedBull Fight with Flight BMX Flatland competition. The event Kicked off with a Jam and meet and greet type of get together at the RedBull warehouse in downtown Indianapolis. This place is small, but has an awesome vibe. The walls are covered in graffiti from the areas best urban artists, and many of the worlds best riders were in attendance. All I can tell you is that Tyler Gilliard, TJ Perry, Matthias Dandois, Terry Adams, Koit, Dominik Nekolny, and an assortment of others were all KILLING IT! Day two was an open jam at the contest site, which is actually an airport hanger. At one point I’m certain there were at least sixty plus riders sessioning. The incredible amount of ride time as well as the laid back atmosphere brought out a lot of guys that haven’t been seen recently. Brian Rybak and Scott Powell, to name a few. Everyone seemed to be having a great time as was I. Oh, and I have to mention that I met Jesse Puente for the first time here as well. He is one of the most positive people I have ever met, and I now think of him as a friend. Thank you Jesse for my new found inspiration! 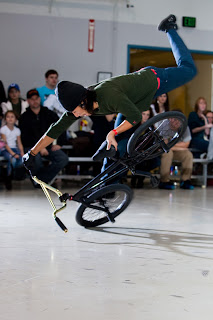 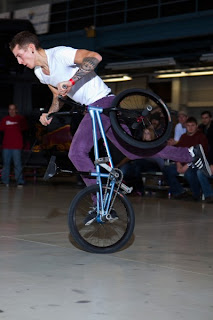 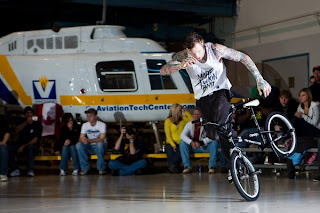 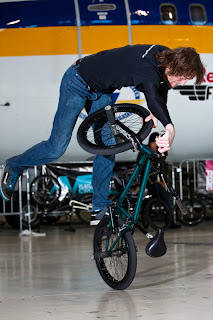 Day three, competition day. I arrived early since sign in was at nine am, and the beginner class started at ten am. I made the mistake of signing in first, which meant I had to go first, oh well, I had a great time anyway. The new breakdown of the Am class has brought out many more competitors than in recent history. Each class had at least ten riders, which made for a great day of riding and fun for all. The top three beginners are as follows; Josh Hanson, Street style and original flow 1st place, Fat Tony, powerful and quick for 2nd place, and in third was Chuck Schroth , old school represent! Big props to all the beginners, I know how intimidating a contest can be. Next up the experts, with the addition of the Master class to this years event, this class was anybody’s to have. Everyone in the class rode great, but the cream rises to the top as they say, and the top three did just that. Bryan Huffman’s smooth spinning style and “Stomp It!” ride outs put him in first place. In 2nd place was non other than Indiana local Joel Schalhorn. Joel is built like an NFL player and his riding was just as powerful.Has anyone ever seen a press handstand rideout?, I have, and Joel was the first I’ve seen do it. In third place was Lee “Huck” Edwards, great guy with smooth controlled style! Good job Grand Dad! I would like to mention that in addition to organizing and running this entire event that Alan Young and Jake Jackson rode in the expert class and represented Indy with style and class. Thanks Boys, You are the BEST! Ok, now for the Pros. I think it needed to mention that there was a mistake in the initial judging. At first the judges had qualified Cory Fester in seventh place, leaving Moto Sasaki out of the finals. When the organizers realized that one of the judges had not scored Cory for his touches, the scores were retabulated leaving Cory on the outside looking in, and placing Moto into the finals. This sucks, I know, Cory was way disappointed, and Moto was almost in tears at the thought of taking Cory’s spot. I would just like to say this… All Judging in BMX, not just Flatland is always going to be flawed in some way. That is, unless we take on some type of figure skating like system with set positions and requirements like that. I’m sure nobody wants that, as it would KILL any and all originality, and turn the future riders into robots. Sorry, just an opinion. The top three riders were not effected buy the judging mistake at all. In third place was Dominik Nekolny, super cool guy, with a style and trick list very few have. I’ve never been to Europe, but if everyone is as nice as Dom, I must go soon. In second place, all the way to Indy from Japan was Shintaro Misawa, not really sure how to describe his riding. I know this, he is slow and controlled, with some of the sickest switches this old man has ever seen! First place went to non other than Matt Wilhelm. The “Human Tornado” Spun, flipped, and switched his way to the victory. Matt has to be one of the most dialed riders of all time, congrats Buddy! Just like to give a big thank you to RedBull, Jake, Alan, all of the riders who came out, Fuel TV,Fat Tony at Ride BMX, Hector at Dunamis media, Steve Lapsley at the Am flatland circuit, all of the sponsors, and Big E for letting me write this story. Hope to see or meet all of you riders soon.
Check these related links:
http://bmx.transworld.net/tag/2010-red-bull-fight-with-flight
http://www.terryadamsbmx.com/pages/news.html
http://sulferblitzbmx.blogspot.com

8 thoughts on “Fight with flight report by Joe Miller”