Welcome to a new section of Flatmattersonline that has been brewing, not unlike the cuppa right next to me right now as I get ready to drop this first episode. After a lot of talk back and forth with Pete Brandt, “Flat Snitches” is born and dedicated to help educate the flatland community on the history of trick inventions and most importantly showing some love to the architects that came up with each trick along the way, not to mention the evolution of each move with other riders putting their twist on it.

Who came up with what trick and when, is sometimes a grey area, but myself and Pete Brandt after all our years of experience are as best placed as anyone to attempt to do this.
We Kick off Episode 1 with the Plasticman, and talk to the trick creator, Jesse Puente about the tricks history and evolution into another move entirely.

When I think about Jesse Puente, his energy springs to my mind. I always recall when he commented “You bust, I bust” back when we both rode for KHE in the late 90’s, his energy was contagious. Always thinking about new tricks and concepts, he made me want to have new tricks every time I would see meet him at contest across the globe. Jesse’s energy brings me to the plastic man and his desire to create something fresh. 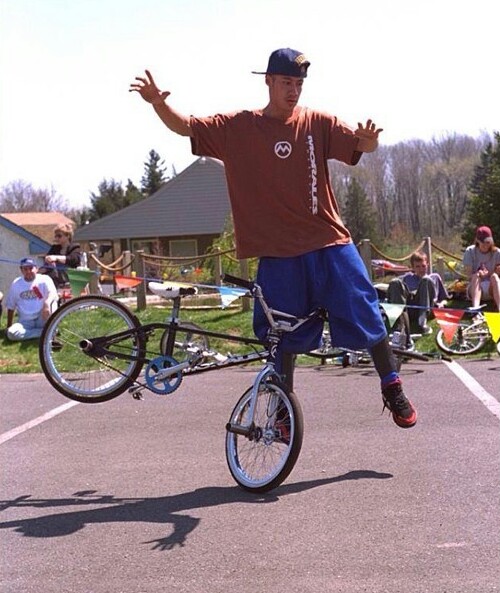 Jesse, rolling the OG Plasticman in Shimersville, PA back in 1994. Photo: Sean Parker.

Origins of the Plasticman.

The original plastic man is with the non balancing foot over the bar, like a gliding switch foot no handed freak squeak position right Jesse?
“Yes, I have my foot over the bars cross footed counter balanced, to keep rolling. It’s a pumping action to keep rolling continually, it’s not often I do this because too many people do it incorrectly and I wanted to surprise people with a more difficult version.”

“When did you start doing the Plasticman? And what about in a contest?
“In 1988-89, I remember doing a plastic man at the Armoury Tacoma contest into scuff whips cross footed. But it wasn’t until I met Richard Zabzdyr (R.I.P) that I learned to roll cross footed over the bar for like a circle and half, that’s the most difficult when it’s pumping.
With Richard, he smiled always and said it could be more difficult. We always pushed each other to make tricks impossible to learn. Richard had many tricks, that riders cant copy to this day.” 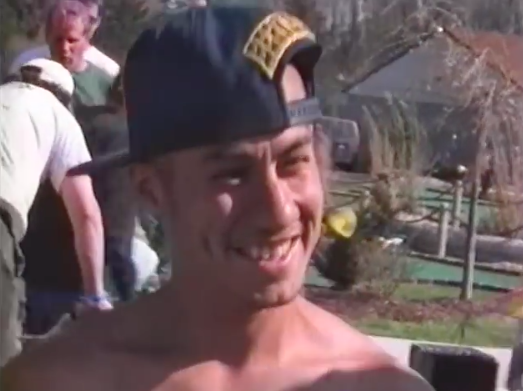 Early developments of the Plasticman.

Back in 1988-89 a young JP was experimenting with a lot of chick whip variations, and by a happy accident like a lot of Jesse’s riding he stumbled across a new concept which began from scuffing a no handed switch foot freak squeak to gliding a no handed xft freak squeak. Jesse quickly figured out that by extending his left foot over the bar he could coast into the “Plasticman” position longer no handed in inside circles returning to the xft freak squeak after coasting, and very quickly this developed into riding directly into the classic “Plasticman” position that many of you will know today.

I asked life long flatland friend, Pete Brandt when did you first see Jesse do the plastic man?
“I remember when I saw it, we were riding at the Long Beach convention center back in 1990. He was doing the plastic man, as well as switch footed opposite elbow glide in a big circle. That’s when we started to notice the older pro riders started to take bits and pieces of tricks that we were coming up with. At the time it was normal for the pros to copy, and use what was out there.
I feel confident in saying RL copied that elbow glide variation from Jesse, and got in Freestylin’ magazine with it.”

Effraim: From across the pond only having knowledge via magazines and later on Reality TV Part 2. Jesse Puente first debuted the Plasticman on an unexpected crowd at a AFA local contest in Oregon in 1990 on board a chrome sticker less Haro Ground Master, little did Jesse and everyone present realise the impact this trick would have on Flatland for years to come.
Chad Johnston of Intrikat fame was on hand, and documented the move go down, and the trick first appeared on Reality TV Part 2 in a quick cameo appearance with riding homie and life long friend, Pete Brandt. That was the first time many of us across the globe saw the Plasticman, and you could already see possible variations of the trick where he combo’ed in and out of xft’ed freak squeaks/chick whips.

I remember sat in awe watching Jesse and Pete bust out on Reality TV Part 2, certain moves we would read about in the US magazines at the time and all wonder what each trick was, and one of those moves was the Plasticman. The impact was massive on a whole new generation of flatlanders across the globe.
When I first saw the move on Reality TV Part 2, I had no idea what it was, I remember being hugely inspired by Jesse (and Pete’s) creativity/image during that time period. Chad Johnston deserves a lot of respect for helping push the artform side of flatland with his videos over the years.

Jesse added: “At the time most riders were just copying tricks from us. I remember at that time of coming up with the Plasticman I had just met Richard Z, and we were trying to make tricks that were much harder for people to copy so easily.” 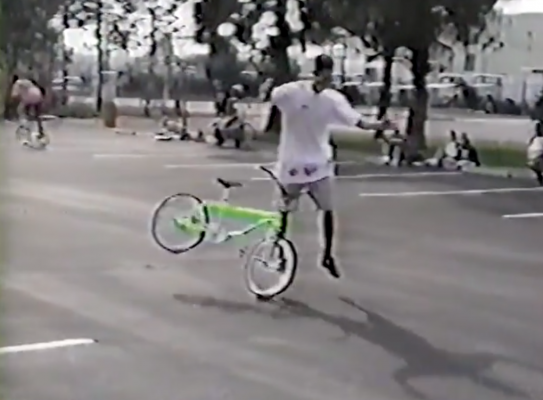 Screengrab of Jesse dropping the Plasticman at the Ride Contest, January 1991. 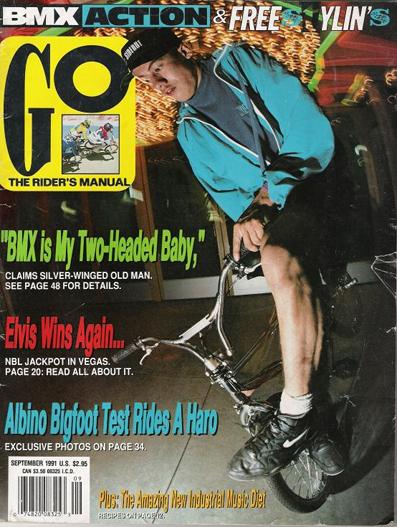 Debuting the trick more widely at the Ride Contest held by Pete Kearney.

The Plasticman wasn’t widely recognised until January 5th, 1991. When Jesse had refined the trick further and was coasting it for a circle at Pete Kearney’s Ride contest in So Cal. Chad Johnston was on hand to document the creativity otherwise many of us, wouldn’t have seen trick for years to come. You have to remember not many riders had seen the Plasticman until Reality TV Part 2 dropped. Jesse went onto the have a full interview and get the cover of GO Magazine in September 1991 (see photo above), further cementing his legacy in flatland forever…

Jesse comments: “At the time most riders were just copying tricks from us and I had just met Richard Z. We were always trying to make tricks up, and get to a point where it was harder and harder for riders to copy us.”

The evolution of the Plasticman.

For many years the Plasticman laid dormant, with Jesse occasionally busting one out mid freestyle at a contest. And it seemed many riders forgot about this trick until around 2004 when Martti Kuoppa released his solo video entitled “Moments” where Martti experimented heavily with linking the Plasticman. With lines such Tea kettle to boomerang to plastic man to pedal squeaker boomerang to plastic man. Also, around this time period also on board a KGB like Martti, Alex Jumelin dropped a two footed xft’ed inside circle in the same position as the modern day Plasticman a’la Matthias Dandois. 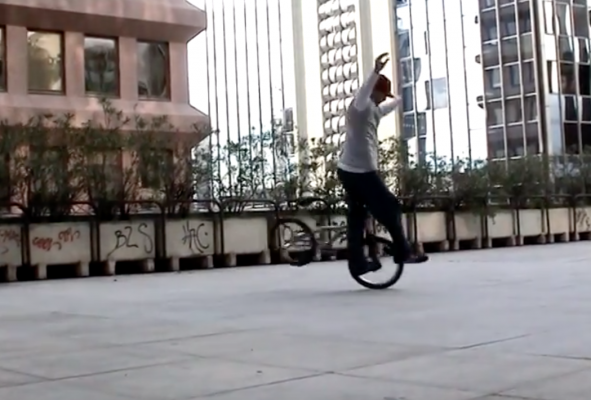 As with any trick it seems in flatland, it only takes one rider to re-ignite the flame, and make that trick cool to do again and it opens the doors and imaginations of riders across the globe. From Jesse the creator, to Martti Kuoppa, and now in the modern era riders such as Matthias Dandois have changed up the style of the trick, carving the trick without the foot over the bar so it’s now a switch footed inside circle no handed hang 5, the balance point now is close to the Messiah and the original x-ft freaksqueak type balance point has gone. 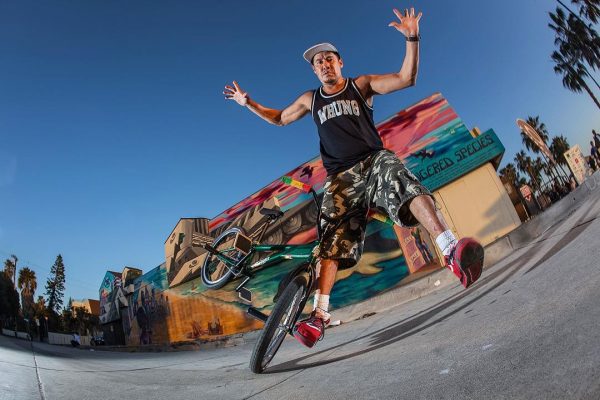 Non of these things are possible without the original trick, much respect to the architect Jesse Puente who has continued to help shape the artform of flatland during the early 90’s and beyond with his original ideas and trick styles. This was episode 1 of FlatSnitches. We hope you learnt something out of this short piece…. Till the next episode, weeeee outtt!!!!