One of the stars of From the Sky up, Aki back to front wheel switch. 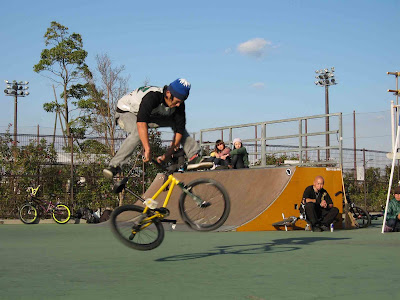 The follow up to “Here Comes The Sun” is out now, I bought my copy from FF, the selling factor for me was the 20 min Chase Gouin bonus section, only a fool would dismiss this…

The first section goes to Simon O’Brien, quite a rarity to see him these days. In the modern day era of web videos/over exposure, its refreshing that you dont see too much of Simon, everyone knows Simon is one of the worlds best riders afterall. Could he live up to his epic solo dvd standards? He did raise the bar!!
There are glimpses of brilliance from Simon. Shot in really good locations, I get the feeling this is just a warm up before his next solo dvd hits. Anyway, what does he do? As always from Simon theres plenty of variety, double front wheel boomerang out of a combo, xft mccircle turbine step thru to halfpacker, and my favourite, whiplashes direct to tea kettle, insane!!! Cant’ wait for his solo dvd!!!
The next sections goes to Akihiko Takahashi, Zion’s Japanese rider. I’ve heard a few people refer to him as the “Japanese Cory Fester”. And from this DVD you can see why, the guy is a backwards riding machine! Long backwards combos with mad technical switches thrown in, snappy style. One of my favourites is all one handed, check this: one handed backwards fork wheelie to backwards crackpacker step over backwards halfpacker to backwards hang5 step over to backwards fork wheelie round to backwards hitch, hard enough with both hands, one handed is epic! I especially liked Aki’s part cause you could see he really worked at it, shot over time, so many hard tricks, filmed with nice backdrops also, as a video part should be. The ender to his part is insane, multiple backwards hang five to backwards halfpacker backwards crackpacker walkarounds. Dont miss this section!
Sequences Aaron Frost hasnt featured on a dvd for a while, I believe Mixt was the last time. Aaron has mad around the world  ambidextrous bike skills, flowing from side to side, his part is full of really long combos, one of my favourites is his xft halfpacker ride in from fork wheelie position to hitch to steam bar flip to crackpacker walkarounds. Aaron is good!
The next part is one of my favourites! Ed Nussbaum has the skills, I rode with him at the Marina parking lot in Long Beach last year, and this is where this part is filmed. The opening combo is one of the best on the whole DVD, hang five to 360 flip to steam one kick walkaround direct to halfpacker turbine, talk about buttery! Ed has mad skills front and back wheel, crazy gerator walkaround to xft backwards wheelie pivot to junkyard glide on pedal, so sick! Ed is massively underrated, much respect Ed!
Matt Wilhelm has the next section, Matt like Aaron hasnt been on a DVD in a while, so this was great to see. Super dialled, looks like Matts section was filmed in one day, shows how dialled he is. One trick I havent seen him in a while that I loved spinning gerator over headtube to switch foot caboose to upside down mega spin flip to mega spin up to blender flip to upside down mega spin flip to mega spin perverted out! That is a combo right there! Awesome! Bobby Carter filmed Matt’s part, dialled!
The last part goes to Chase Gouin, do I have to say anymore? Nah……
But I will… This is flatland history right here. Chase’s part covers old tricks and new. Some of his tricks are mind boggling, try this (jokes) whiplash to opposite chick whips stomping on the tyre over ten times without touching pegs to xft tomahawk, flat out amazing! Is this guy old school? Give me a break?!!!!
His perverted decade combos on here make new school riders with foot jam decades look stupid!!!!
And theres so called “New School” riding as well on the bonus section, really nice halfhiker turbines, pedal hang five shove its anyone? Loads of nice floating style combo that Chase originated. His part and bonus scetion is comprehensive and not to be missed.
I feel silly typing this, its Chase! The guy is a legend, pay some respect! Go buy this for a piece of flatland history.
Stewart did a great job with this DVD, much better production/editing than HCTS, nice mix of music for the soundtrack, and 8mm/16mm footage also.
I give this a high 4 out of 5.
Whole DVD has feel good factor about it. Glad I bought it.

6 thoughts on “From the sky up review”