Text and photos by Anthony Buglio.

G-Shock (Casio) presents “Real Toughness.” This multi discipline contest held in Osaka on August 10 was one of the most exciting events I’ve been to. Flatland, a skate rail jam, B-Boy dancing, break dancing and a live MC performance all made for a pretty amazing Wednesday night in Osaka. There was also a live art performance where two artists had 15 minutes and a blank canvas. At the end of that time what was left was an amazing rendition of a b-boy in full breakin’ style. The event was geared to find the “Real Toughness” of B-boy culture. The dancing, DJing and skating were a perfect complement to each other. 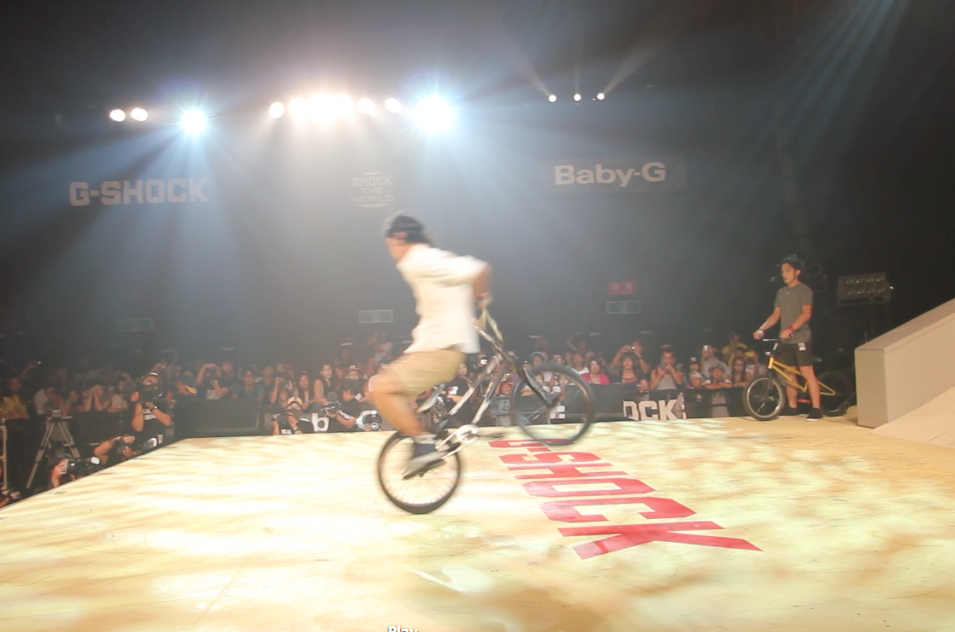 Ucchie two footed backyard on the way to first place!

As for the flatland portion of the event, 9 riders entered, and they were divided into 3 groups for qualifying. The clock was set at 5 minutes and each rider could ride until they touched or finished their link. The format worked well for the crowd and each rider got several runs on the small stage. The winner of each group advanced to the final where the clock was set at 7 minutes. The final battle was amazing. A live DJ provided the sound track all night and the crowd was hyped. Here’s a brief breakdown of the qualifying groups and final battle. Working on the video edit now! 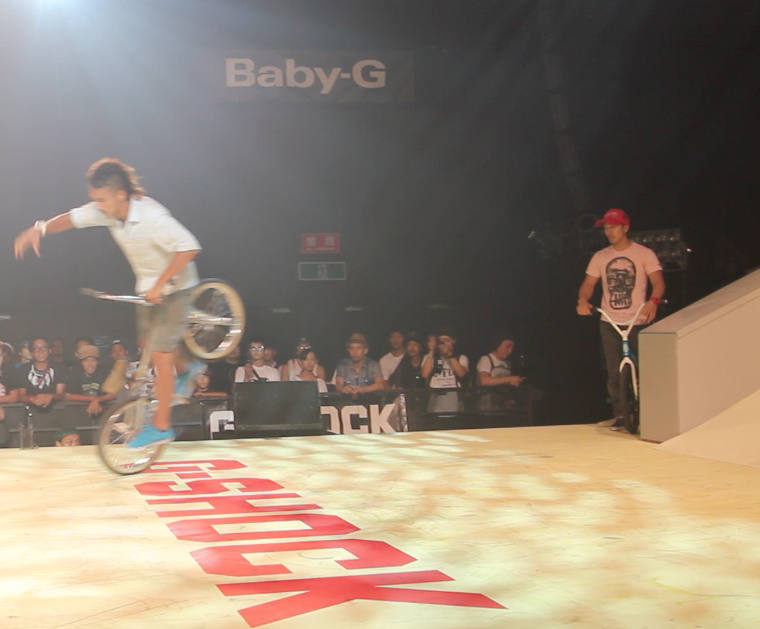 Good to see Kotaro is still in the mix!

Group A: Hiroya Morizaki, Kotaro Tanaka, Yasushi Tanabe. This group might have been the tightest to judge with each rider hitting links right off the bat. The small size of the stage seemed to trouble Kotaro the most as his smooth back wheel links were cut a little tight to avoid tumbling off the stage, though he still managed to knock off some nice forward deathtrucks. Hiroya put down a real smooth run of front wheel pivots and a couple half-cab front to back jumps. In the end, Yasushi Tanabe got first place in the group with a host of front wheel turbines, switches and style for miles. Tanabe advanced. 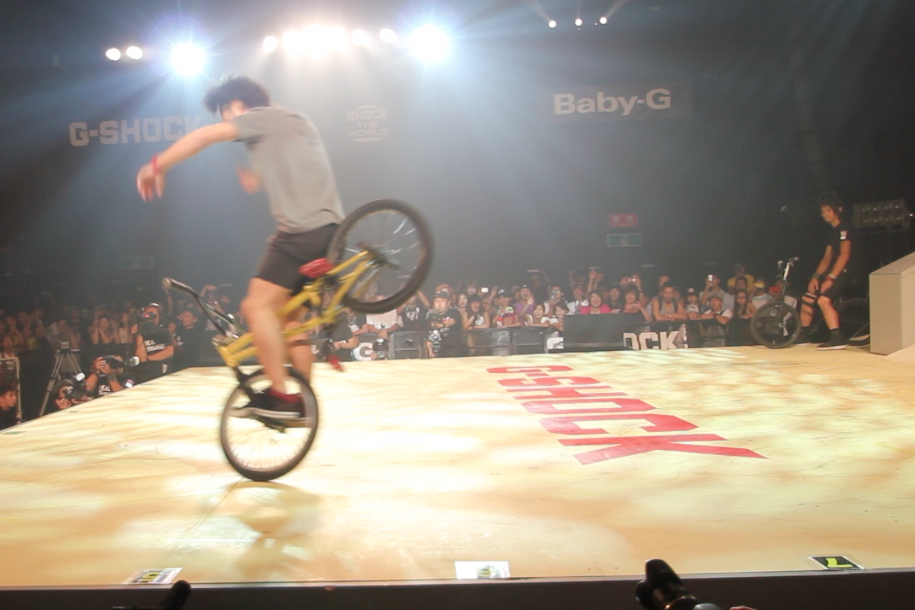 One of the most stylish riders on the planet, Tsutomu Kitayama!

Group B: Kotaro Arai, Tsutomu Kitayama, Tomokazu Morinaga. Another tough group to judge with such a variety of styles. Kotaro Arai is well known for smooth whiplash variations, but this was just not his night as he struggled to put down anything consistently. It’s no small test of skill to try cross footed jump lashes on a tiny stage, but he went for it anyway. In the end, too many touches did him in. Tomokazu Morinaga may have had one of the most exciting tricks of the night in my opinion with an inside back wheel glide to full bike pivot. His inside on-both-pedal back wheel Stick B glide is also amazing and he threw that one down in a nice carving circle. Tsutomu Kitayama just wouldn’t be denied though with a few runs just jam-packed with too many tricks to name. One of his longest links started with a plasticman, kept it going with some turbined front wheel pivots, threw a spinning Dave Duster in for good measure into a nice pumping cliffhanger and capped it off with an amazing bar flip pivot (a la Matthias) and the crowd went nuts. Kitayama advanced.

Group C: Yohei Uchino, Shinichi Kiba (Russia), Yoshihiro Nishikawa. Another group of diverse styles. Yoshihiro Nishikawa fought hard to get his runs going, but kept getting hung up on a transfer, a sort of behind the back switch from a inside back wheel glide to backyard. He gave it a few tries, and in the end that may have done him in. Shinichi Kiba threw down some buttery smooth front wheel flow to little crowd reaction. Juxtaposed to Yohei Uchino’s fast spinning back wheel tricks, it’s easy to see how the average crowd can’t understand the difficulty level. Though he made a few choice links, it just wasn’t going to happen for him. Yohei Uchino was on point from the very start. His links bordered on the out of control, but everything was tight, fast and amazingly on beat (the DJ was throwing down some dirty dub step). Uchino advanced. 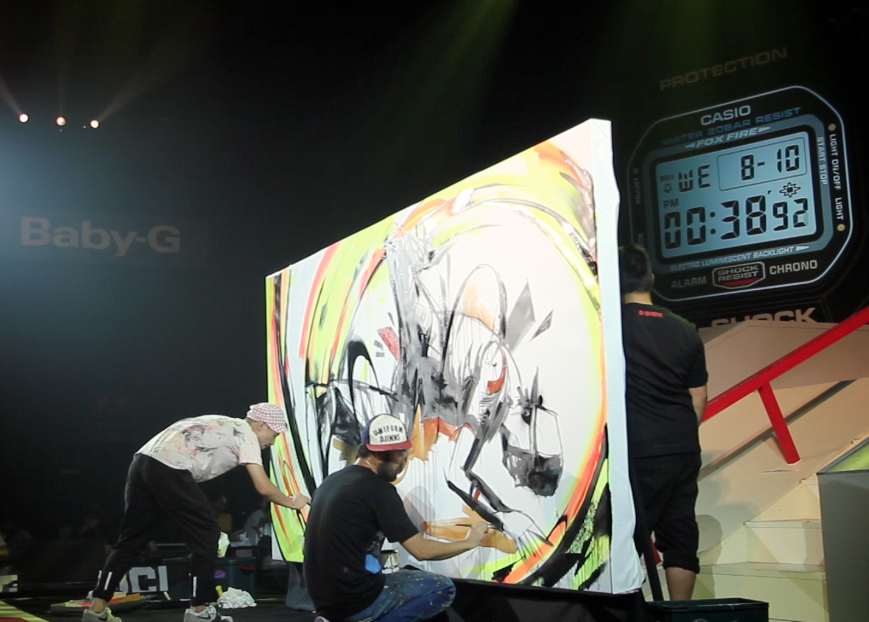 As well as flatland, a bit of graffiti culture thrown in the mix!

FINAL BATTLE: Yasushi Tanabe, Tsutomu Kitayama, Yohei Uchino. Couldn’t really ask for a better final battle. The clock started at 7 minutes with the same format: ride until you finish a link or touch. Each rider carried the momentum from the qualifying battles into the final, and to be honest, the runs were much the same. Yasushi put in front and back wheel work and might have won the award for coming closest to falling off the stage when in the midst of a front wheel link his tire came within an inch of the edge. A couple bails though during his runs ultimately hurt his chances. From watching the qualifying runs, I thought it would come down to Tsutomu and Yohei and whoever hit their links the tightest would walk away with the win. Both riders put in work with Tsutomu concentrating on the front wheel, while Yohei killed the rear. In the end, Yohei’s consistency, difficulty and manic speed propelled him to the top (taking home a very nice G-Shock watch and an even nicer 200,000 yen!

The rest of the event was bonkers as well with some impressive skating, dancing, and general b-boy flavor. It was obviously a event G-Shock hopes will sell more watches (I don’t know this for a fact, but I have to think G-Shock sells more watches in Japan than the rest of the word combined). Very commercialized but who cares. In the end we got to see some amazing dancing, skating and flatland and once again a rider went home with some well earned cash for doing tricks on a bike.