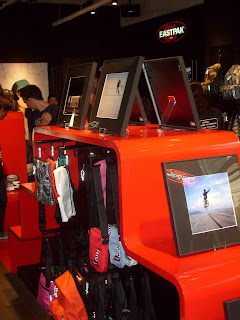 Whilst myself and Sam Foakes were in Tokyo for the World Circuit finals we were invited to Green G’s photo exhibition a small distance from the famous Shinbuya crossing downtown Tokyo.
The concept for the exhibition for the photographic exhibition was so simple, yet amazing conceptually.
“The current prosperity of Japanese flatland scene, is rooted in 6 Japanese riders, York Uno, Takashi Ito, Ryoji Yamamoto, Hiroya Morisaki, Akira Okamura and Kotaro Tanaka, born between 1975 to 1978.
Along with those top 6 riders still greatly contribute to the development of the flatland, “+Next” which stands for for the next generation, the most prominent rider, Youhei “Ucchie” Uchino is featured.”
For many flatland is an art and this exhibition I felt enhanced that viewpoint, the Japanese embrace flatland as part of their culture, and Green G did a great job in simplifying such a complicated artform, the exhibition consisted of only 7 images laidout in the middle of the Eastpak store.
Having only seven images it made the exhibition was easy on the eye and very focussed, one photo of each of the riders, in my eyes by far the standout shot was the capturing of Hiroya’s steam whip to timemachine jump, where Hiroya appears to be floating in the air.
Riders such as Simon O’Brien, Michael Steingraber, Mike Sommer, Hiroya Morisaki, Yammer were there the day we went to see the exhibition as well the regular public.
Only in japan can you see something like this, flatland is beautiful.