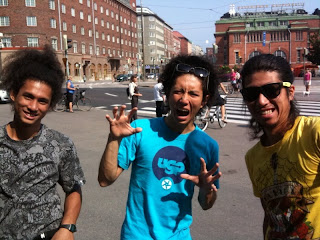 Saturday was the day of the groundtactics final! Martti had to teach kids flatland during the morning, he was stoked kids were really responding to flatland, I chilled at Martti’s flat with the guys. So we rode down to the venue around midday, with Toon as our guide, we got lost! So a quick call to Martti and he came to pick us up and ride down to the venue. The contest was scheduled for 5pm, we arrived at the venue, in downtown Helsinki at 1pm. 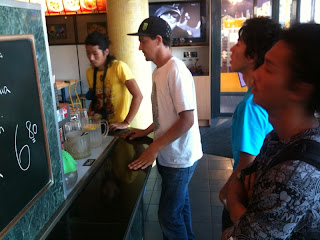 Martti took us all to lunch, he went out of his way all weekend to make sure the guys were comfortable and ready to compete. The rice was flowing, as Martti explained what myself and he were looking for in terms of judging criteria, and the five run format! Groundtactics is not a regular contest, this is about pushing the level of flatland higher, and the format gave the riders the chance to do that! I personally thought this was a very personal touch that only someone like Martti can bring, cause he understands the concerns and questions of a top rider. 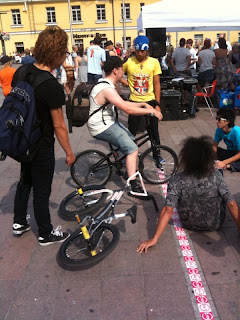 The locals were naturally stoked to see big names like Moto Sasaki, Takahiro Ikeda and Toon in their native homeland. The whole vibe was really relaxed. The groundtactics event was part of a creative arts festival called “URB”. Just around the corner from the event was a sweet lil coffee bar with flatland photographs being exhibited. Lot of spectators came to check out the unique groundtactics contest, and more importantly stayed and interacted with the riders before, during and after the event. 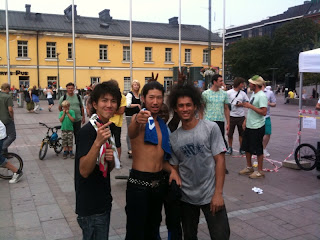 The guys had a real good vibe towards each other all weekend, it was kinda funny before the runs as they prepared, this was the one time they separated all weekend! The five run format had plenty of twists, if it had been a one run format, Takahiro Ikeda would have won! Both Takahiro and Toon’s first runs were their best, Moto’s 3rd run was his best of the day, during some runs when he touched, he’d go for some insane combos, which is what we wanted, backwards spinning karl bar flip to circle k to halfpacker stuck out in my mind, as like wow, he’s going for it! Ikeda pushed his level, trying the time machine walkover to spinning gerator without laying the bike down, plus a few new moves in there, both he and Moto had a ton of new stuff. Moto dropped a wicked nose manual direct to backwards spinning karl to xft steam flip to halfpacker in practise, sadly this combo didn’t appear in the contest, nevertheless, the audience knew what was up and grasped as he threw his body into the backwards spin. It was a beautiful moment. Toon was stomping everything in practise, I thought he might cause an upset, but sadly crumbled under the pressure. His grunts mid trick were the topic of many riders throughout the weekend, Toon was a ton of fun to hang out with. He’ll be back! The mc, Michael Black electro brought a nice light hearted hip hop style to a serious contest! The riders, and the audience were stoked, from the contest we went for a session at a nearby riding spot! Much respect to Nokia for supporting the groundtactics event! What a success for the first year! One of the best events ive ever been to!