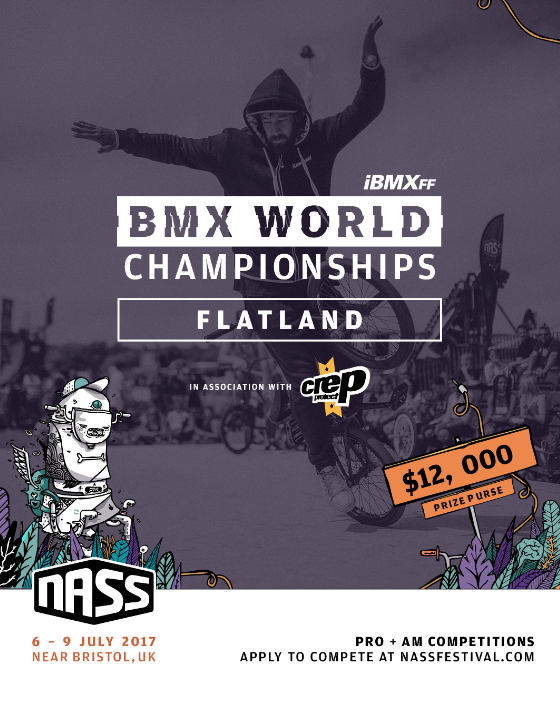 BMX World Championships are back at NASS, Thursday 6th through till Sunday 9th July.

NASS festival, the high-octane action sports is stoked to announced that the iBMXff World Championships will return to the festival in 2017.

Last year saw NASS host The Worlds as the renowned international competition returned to the UK for the first time in nearly 30 years. It has now been announced that the iBMXff has sanctioned NASS to host the event for the second year running.

Hosting Pro and Amateur contests across Park, Vert, Flatland, and Pro Dirt disciplines, this year’s World Championships promise to be even bigger and badder than last year’s. Athletes from across the globe will descend on NASS festival from JUly 6th-9th for the chance to become a world champion, as well as for a slice of a $50,000 competition prize.

Europe’s leading skatepark builders Four One Four Skateparks will design the pro park and given the sheer insanity of the course they built last year, with its monster drop-ins, open loops and huge transitions, 2017’s design ought to be even more epic and will certainly push the riders to their limits.

Mat Hoffman, Chairman of the iBMXff said “I was there in 1988 and its was amazing to be there again last year. To say we are stoked to be coming back again in 2017 would be an understatement. If last year is anything to go by we will certainly be high giving the progression and rocking even more love for BMX!”.

The 2017 Athletes have yet to be announced but the draw of Mat Hoffman and the iBMXff World Championships will no doubt bring with it the world’s top talent in BMX, as well as a host of talented amateur riders looking to push their skills to the max.

Richie Inskip, NASS sports manager, said “Hosting the BMX World Championships even once is a privilege, so to have it at NASS two years in a row is insane. Last year’s event was the best we’ve ever had, the guys came and just tore up the park and the progression we saw was just ridiculous.

“I’m absolutely certain that this year will be even better, we’re designing the park with Four One Four and it’s really going to push the boundaries of what we did last year and make for an even more spectacular event.