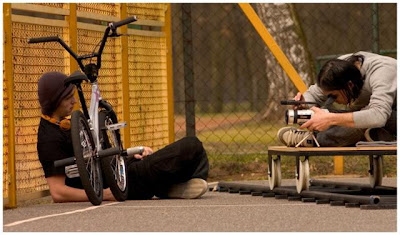 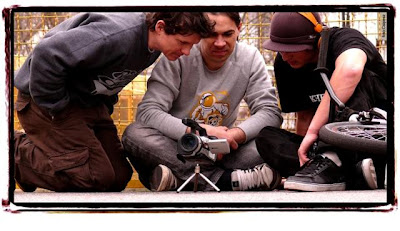 Tom at Sevisual is as dedicated as they come, this January he was over in London to film the TGM video, let me tell you, it was f’ing cold that day, I couldnt stop riding all day because it was that cold. You can see the breath from each rider if you look closely on the video edit. What im trying to say is Tom is dedicated to filming, but his ability to capture the riding in a simple way, lets the riding do the talking. He has helped push flatland in a positive way in the last two years, much respect to this man. Without further due, heres the interview…

Please introduce yourself?
My name is Tamás Hajdu, I live in Szeged, Hungary, and im filming and editing flatland videos under the name Sevisual.

You shot to infamous flatland fame with the edits of Matthias Dandois and Adam Kun? What background in bmx and film making do you have if any?
I started riding BMX around 1988 and finished around 1993. Unfortunately nobody was riding in my city in the 90’s….I never left BMX totally, but I was not riding for years.
I got back in the business in 2000, after I spent six months in California, and discovered BMX again. Flatland is my love and it will be forever, even im not riding a lot anymore. But I still go to hit the ramps or just roll some flat with the locals sometimes.
In film making, basically no background. I always wanted to make films, so I just get a camera a couple years ago, and started to film BMX riding.

There’s rumour of a Sevisual video sometime this year? Any truth in that? Of so, what can we expect?
Yepp, im almost at the finish line. The dvd will be a very special release, with a little help from Carhartt, a two discs combo, a Sevisual-Amtrak collaboration. On the dvd, will be my best web videos of the last 3 years, the Hyperspeed video, Adam’s videos, Michi Sommer‘s section ..etc. ’cause many people emailed me and ask for the videos on dvd. I know its strange, why releasing already seen videos on dvd, but I hope people will buy it. Its like a band putting songs available to download, but U still buy the cd if U like the band or the music. However, there is a 15 minutes new bonus section on the dvd as well…I will take you from Hungary through Austria to Paris, France with riders like Adam, Sepy, Laszlo Tivadar, Michael Sommer, Sebastian Grubinger, Matthias and some parisian riders. The extra cd will be an Amtrak audio mix, an exclusive mix for Sevisual, made by Michi Sommer. He showed me some parts of the mix already, and it sounded amazing!

What would you say the philosophy of Sevisual is?
There is no main philosophy behind Sevisual. Hardcore flatland riding, clear pictures and relative simple editing. I really like to keep things simple if U know what I mean. I wanted to show flatland as a real sport, an artform, and make good motivation videos. Here is the method:…film the rider, digit the footage from the tape, which I hate to do:)…than pick the perfect music for the video, the music is real important…..as soon as I picked the song, the
fun starts, the actual editing…usually when everything is gettin’ together I finish the video in one sit even Im not sleeping that night.

Of all the videos you have made, which are you most proud?
I love any video with Adam, Matthias and I really like the Michael Sommer video too. I love to work with Adam n Matthias, …the result is always amazing..pure flatland madness. Filming the Hyperspeed video was great, the kids are pushed each other every day…we will continue..lets say we already started! If I have to pick one video, I would say the A-damn 2009 video is my favorite. Adam’s combos are freakin’ amazing, and the whole thing is almost perfect. I have to tell You, all the six combos are in one tape, which means Adam pulled everything during 40 minutes. Sick.

Which other flatland film makers do you like the work of?
I like Chad Johnston’s stuff…and James White is pretty good too..:)

If you could film any rider for Sevisual section who would it be?
Maybe Martti, Viki n Hiro, just to name a few. A Japan Sevisual video would be awesome to make. I was travelled around the world, but I cant wait to go to Japan one day. Filming with Japanese riders and eat the best sushis will be amazing for sure….and im still waiting for the “next Adam Kun” here in Hungary…we have many very talented riders, but looks like they don’t practice as much as they needed too.

Which projects can we expect in the future?
You can expect the best flatland dvd ever….:)

Also, I liked to say THANK YOU to my Parents first..than to all my friends:
Peter Szabolcsi, Adam Kun, Laszlo Tivadar and his whole family. Michael Sommer, Sebastian Grubinger, Matthias Dandois, Rob Alton, Norbert K_rösi, Áron Redenczki, Csabi n Ági, Phox from Debrecen….thnx to Robert Timar, and Suzi in Sydney, Australia (hello Zeon!) …and a huge thnx to my biggest inspiration, Buckethead. He is the greatest and he is my battery! Also a big thnx goes out to every rider I was workin with and everyone who send feedback to any of my videos over the years…and thanks Effraim for this interview!