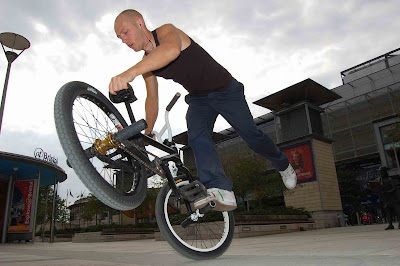 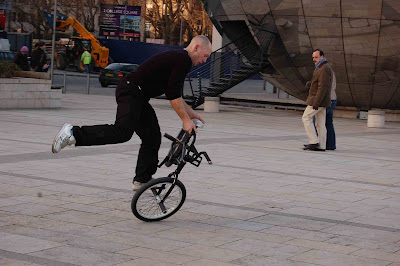 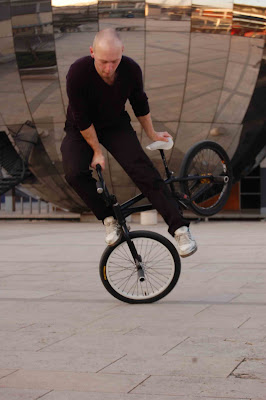 Yeah, I can see what you are saying, makes a lot of sense, lets move on though. I’m intrigued by your riding Ciaran, I used to be into pedal bar flip stuff, I got to a point and just kind of stopped going in that direction, what’s inspired you to push that direction as far as you have, particularly the one footed bar flips? Was it natural progression?
I guess it was natural progression, its pretty evident I’ve always had a personal quest with around the world/walkaround stuff, often I sit and think about how many ways are possible you know. My spot limitations have certainly encouraged this also,
and I’m also sure it will continue, what the brain can concieve the body will achieve and all that. I’m really not influenced by the mainstream flatland scene today at all either in terms of styles, so I just stick to my own thing and focus on what I want to achieve.

It’s refreshing to see a rider come at riding from a different stance, I mean it’s obvious you can see videos online, but it’s never quite the same as being exposed to riding face to face, what do you not like about the modern day flatland scene?
Hmmm tough question, because I don’t have anything much to do with with it, so I can’t comment in depth, although I will say people seem far to sensitive to criticism.
I guess I don’t like how much trend following there is, you know like how it got with pinky’s back in the day is how it is with turbine steams styles today and that’s not to say it’s a negative as such, but do all these riders really have no idea of styles or tricks that they want to explore themselves?
Obviously there a stepping stones in progression to get to where you want to be, but it seems the majority are walking the same path at the moment, which again is fine, but it’d be nice to see more variation in the scene with styles, kinda makes me wonder in the eyes of a newcomer will they feel in terms of conformity. They would go away and learn the styles they see in comp vids, because they feel that’s what you have to be doing to get there? I dunno, it’s such a complex topic and its easy to focus on negatives, all I don’t like really is how fashion and style seem to be overtaking difficulty and originality.
I was speaking to TJ (Perry) recently and were both agreeing it’d be nice to meet more riders who are really into the riding more than just the social/fashion aspect and that’s not like dictating in anyway as to how flat should be, but it’d be nice to you know, for me the “fun” is perseverance, hard work and achievement so obviously it’s nice to meet some more riders who you relate to with on that level. I haven’t got time to discuss parts ha-ha, let’s ride instead.

How often do you film your combos? Do you find that helps with your own personal progression? Like a kind of, I’ve done that, I’ll take it to the next level…
It’s a common theory that filming yourself can help with progression and for some people and in moderation it can, I mean amongst myself, Chris (Wright) and Sabu we would commonly share progression videos and give feedback to each other which became motivating in itself. Yeah I used to be very much that way, you know film a combo sweet it’s done, next combo but nowadays it’s not like that. I want my links to be dialled especially at this time of year in the UK when the weather is so shitty. I want to be dialled, so I don’t have to fight that frustration every winter of failing links for to long due to less practise, plus I shift my focus in winter to things I can practise in the wet, which aren’t even my dry weather tricks to practise.
Again it’s all about planning out what works for you and I think making the most of your riding time I would definitely say having tricks you can practise in all different conditions helps a lot, because everything can be pushed anyway like this winter and my personal mission with variations of kruzer flips.

I saw the videos, crazy how you’ve pushed that trick. Do you work out at all? Those bar flips are serious upper body strength..
Ha-ha nah I don’t work out in terms of muscle, flatland and a bit of road riding are my forms of exercise, I like to stretch also.

I’m also intrigued by your motivation, how do you stay motivated, do you ride with other riders?
It’s funny. I’ve been asked this question a few times in the past, to be honest I’ve never ever had a problem with motivation I think that’s for a number of reasons. I love being alone and never get bored, also as anyone who knows me will tell you I’m pretty deep into music, since I was ridiculously young so riding for me becomes like an element that goes hand in hand with music, so all these things, riding, music, and the exercise of it all add up to infinite motivation for me. I ride alone 95% of the time with the occasional meet up in near by Bristol.

I guess that brings me onto music, what are you into? Do you ride with music on being that you ride alone?
Yeah I always ride with music, I always live with music on 95% of the time, music for me is something I still sit down and dedicate time to listening to in depth, not just as background noise. Music i’m into, ha’ha well I could easily say a good 20 pages worth on this subject so I’ll just keep this short. I listen to Oldskool rave/hardcore, jungle/dn’b, IDM, psytrance, speed garage, jazz, funk, classical oh and Autechre who deserve a mention on their own for a number of reasons.

How long have you been riding by the way?
I started riding in my last year of school in 2002, so 6 years.

How much do you think your riding conditions dictate your riding style? You’ve mentioned before that no one would want to come and ride your spot?
I think it’s totally down to the individual, for example I’m pretty determined with flatland. I love it so regardless of where I have to ride I will always make do and still put my all in. We used to have a wonderful spot here in Taunton, but it was built on so I’m left with a rough carpark on weekends and after 5 in the week, which isn’t so bad and a totally shocking spot which is literally 3 metres wide and 7 metres long which I usually ride in the week after 4pm, it’s very close and even though limited it’s forced more creativity than ever before so I’m not going to focus on the negative. But yeah I would say to anyone who isn’t blessed with great spots to focus on the positives don’t waste time thinking about what you can’t do focus on what you can do no matter how bizarre it may be, you’ll surprise yourself with what you can come up with. The only limits are the ones we apply to ourselves.

You can totally see that the majority of UK riders, who have a rolling style and also brakeless, and you could link that to the fact its wet 60% of the time, sometimes more ha-ha, unless of course you have an indoor spot. Thanks for your time doing this interview Ciaran, been great talking to you.

Some more videos so you can see what we discussed in the interview.