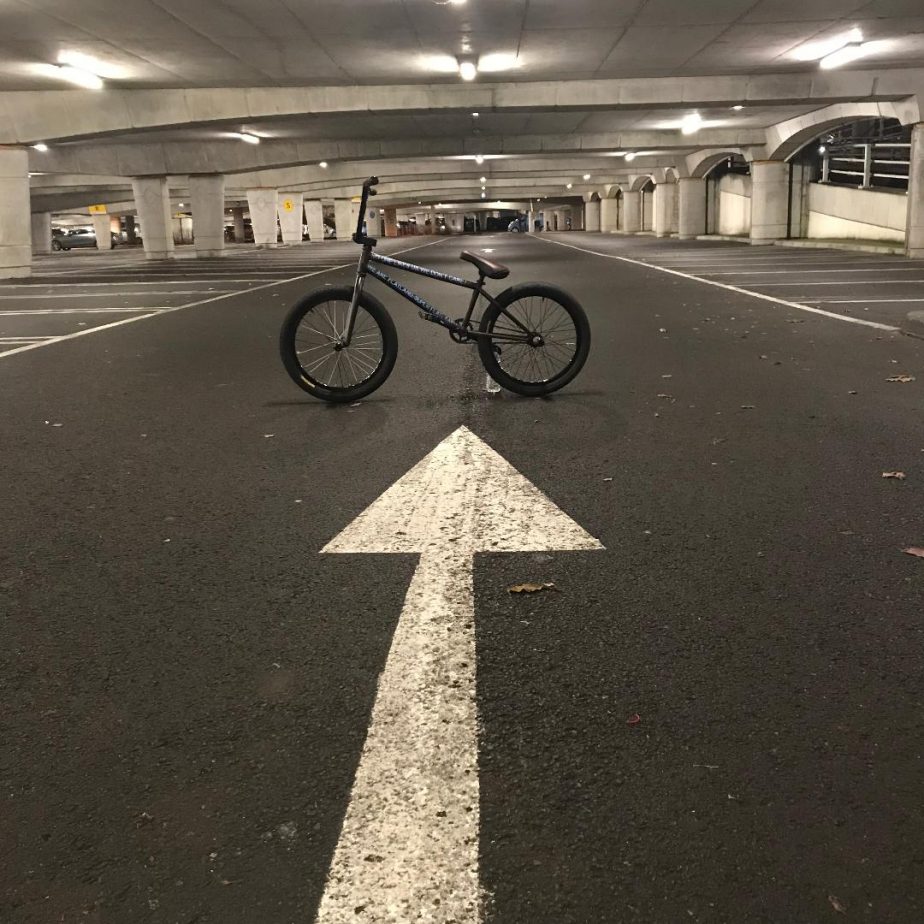 If you pay attention to riders set up, you will notice James White always has some interesting bike modifications going on his ride. Many of you have been requesting James to do a bike check, the man himself got in contact and offered to show his bike check on FM! Over to Whiteski for the 411..

“So I’ve been getting a lot of requests about doing a bike check. So here it is.
To explain a little. I stopped getting support from S&M around mid 2017 as they were stopping regular production of Intrikat. I went straight into working with another company on a potential frame release. Sadly, that too was put on hold towards the end of the year. That left me with a rather tired bike and ripe for a fresh set up to kick start the new year.” 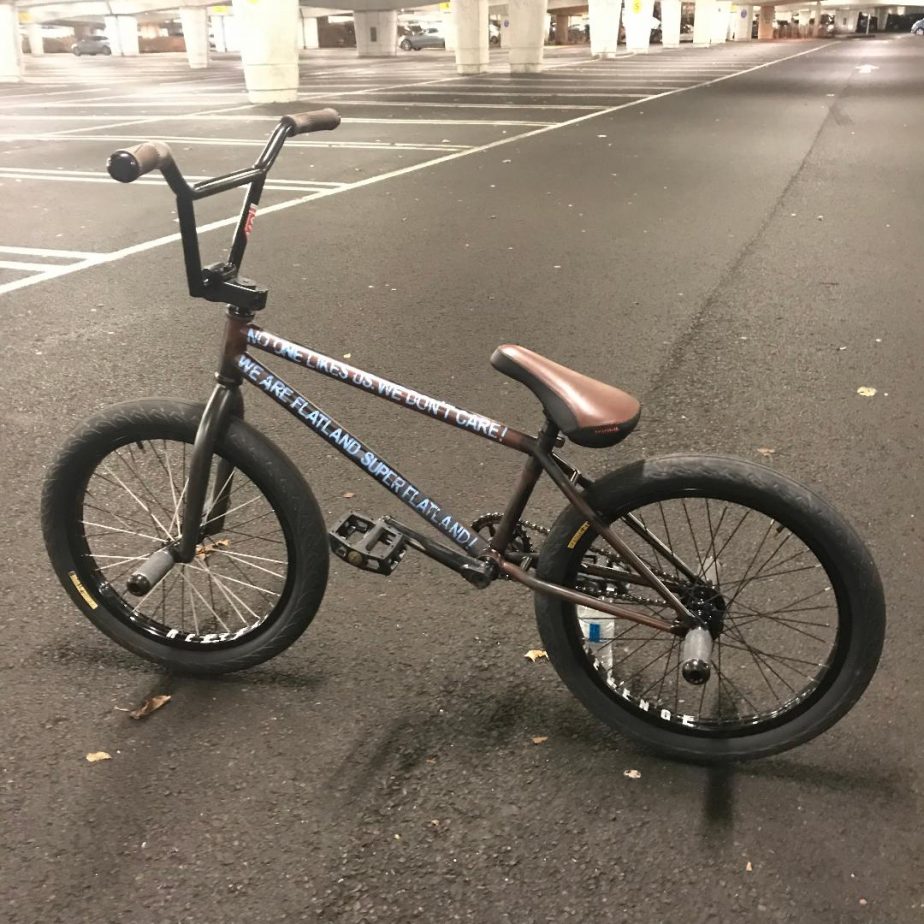 Frame:
FIT Benny L 20” tt. I think this V2. I rode the Benny L v1 frame before the Intrikat, and is fairly similar other the BL is a little more nimble.
The frame was donated by Keelan Phillips (Cheers mate). He rode it for a short time and had a painted light blue. Not a colour that I’d be comfortable with, so a couple of rattle cans and letter stencils later it was this.. 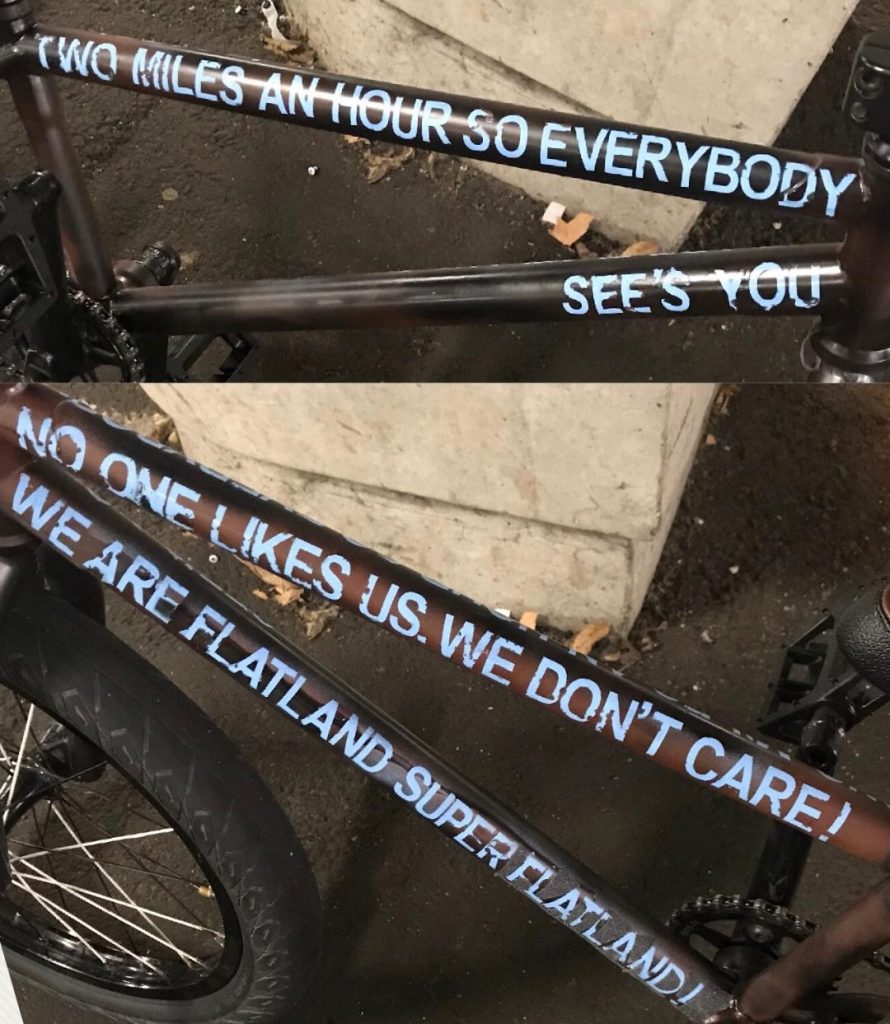 Forks:
Amity RD. Full offset. (2012 model I think) I’ve been wanting to go back to full off set for sometime. The closed dropouts makes sense to me for peg strength and rigidity. And the round capped legs looked sweet. Love em.

Grips:
Animal. Why?… because they were a nice shade of brown.

Bar ends/grip savers:
The barends are unbranded bar alloy capped versions. The grips savers is something I knocked up out of Delrin (see Pegasus pegs) as I was destroying grips so fast doing sweepers (bars grinding landspeeder). Not sure how long there stay on for though. 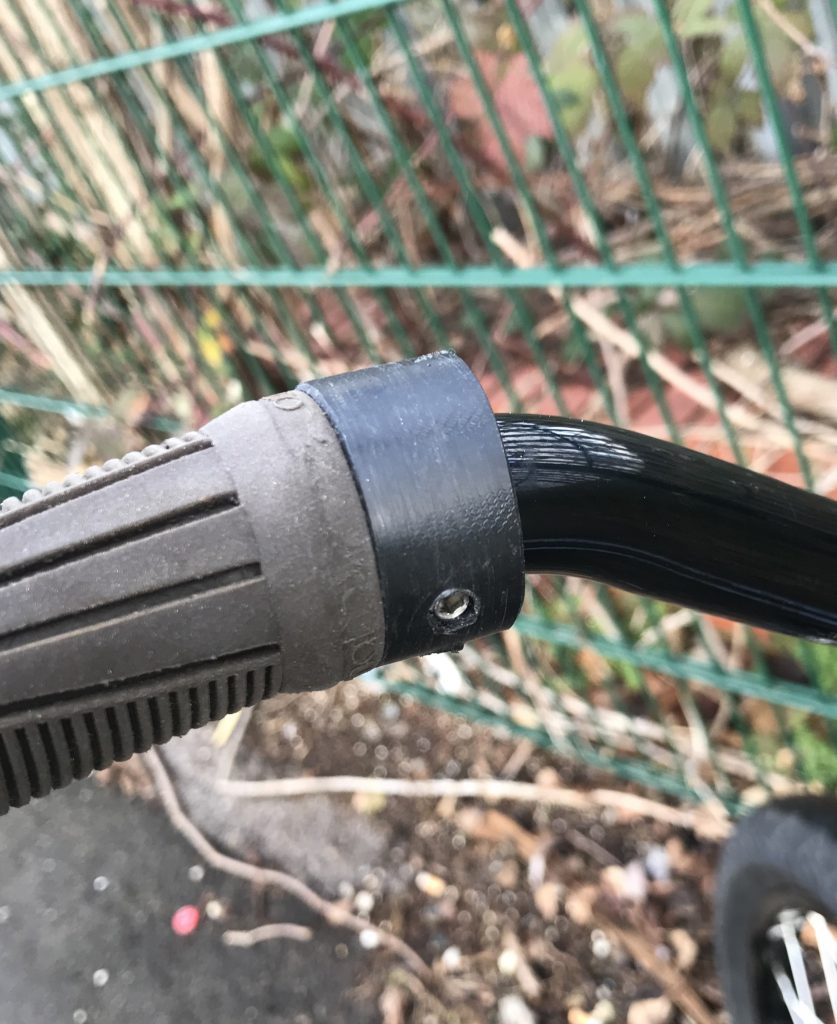 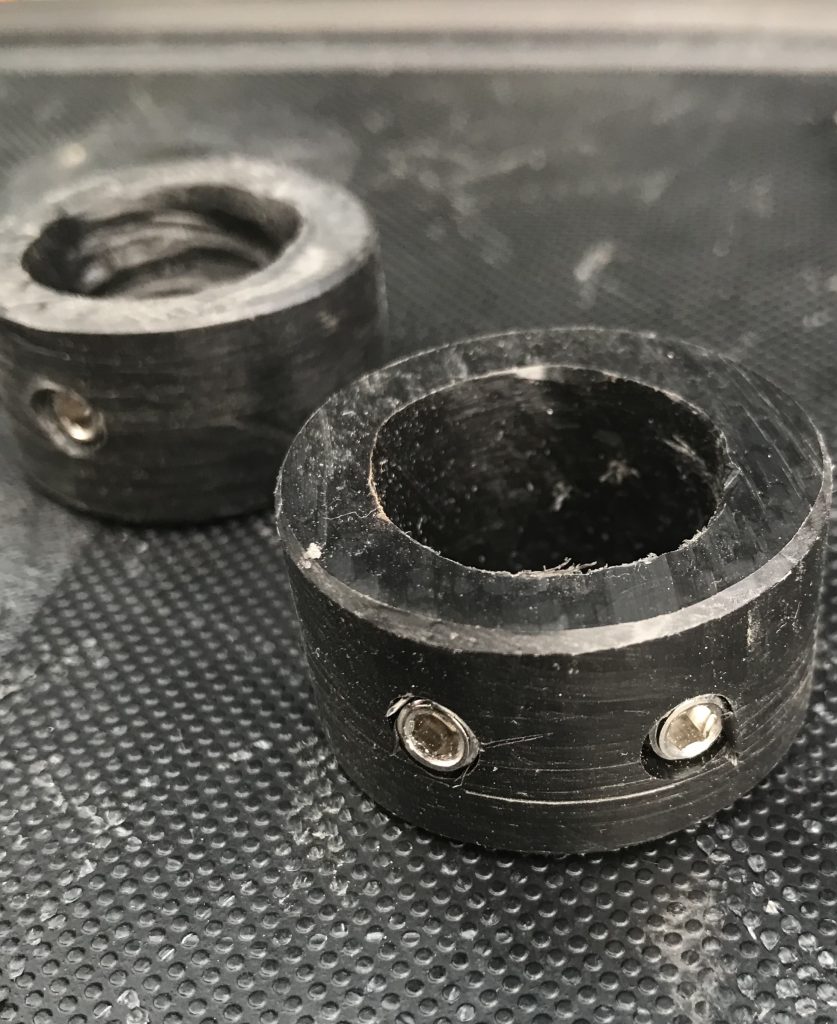 Tyres:
Animal Tom White 2.0 rear 2.20 front. Like the frame and forks this is another part is no longer in production and just came up in the right size. Good tyres but not as fast as some I’ve tried. I find having a slightly smaller tyre on the back (around 1.9) Just makes the bike feel little less clumsy. Front I’ll have something around 2.10 -2.20.

Rims:
Revenge. Again no longer in production. Had them forever still like new!!

Hubs:
United supreme front, freecoaster rear. Had both for years with no issues.

Spokes:
Although I love playing with bike parts at times I’m actually pretty bad at keeping my bike dialled. I snap spokes all the time, and don’t replace them until my wheels virtually don’t roll then I replace them with any spokes I got lying around. 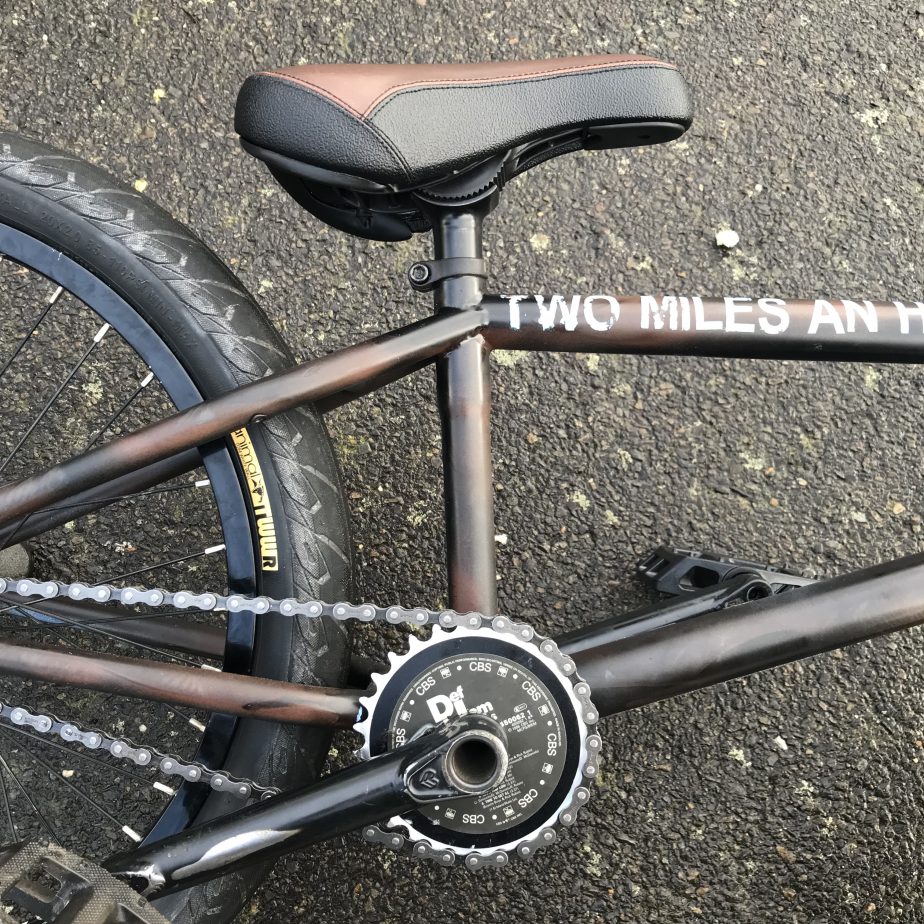 Crank:
Eclat. Had it for a few years. I run 2 outer spacers on both sides just to bring the crank arms as close as possible to the frame. 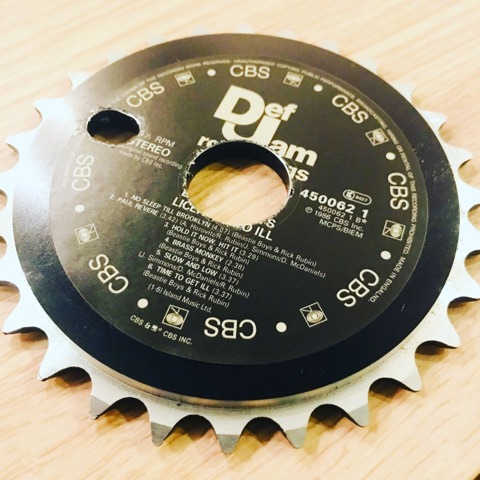 Sprocket:
I run a 28t sprocket, contrary to popular belief I like to ride fast! It also has a Beastie boys licence to ill record label slapped on it making the coolest sprocket in existence.

Stem:
S&M Challenger (49mm) it’s S&M, so I probably never need another stem in my life. 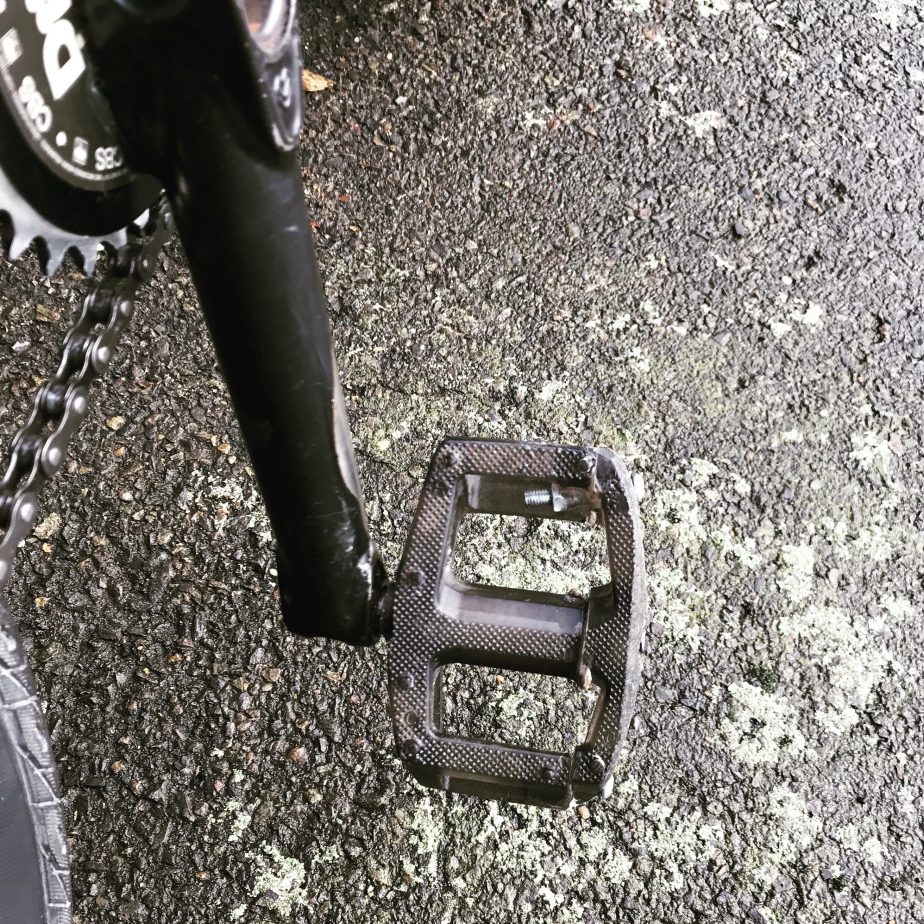 Pedals:
Animal. Just your regular no fuss resigns pedals based around the classic Shimano DX. Until you chop one in half. Yes, that is a fully working half pedal. I was playing with a trick where the pedal was getting in the way so made this up. I love playing with parts, but is unlikely be stay on the bike for long.

Pegs:
Pegasus. Just a well made strong stable peg made by the legendary Jeff DesRoche himself. There are a selection of end caps available. My favourite being the black ones which are made out of a material called Delrin. Which is a very tuff plastic with similar wear capabilities of alloy and great for pivoting. 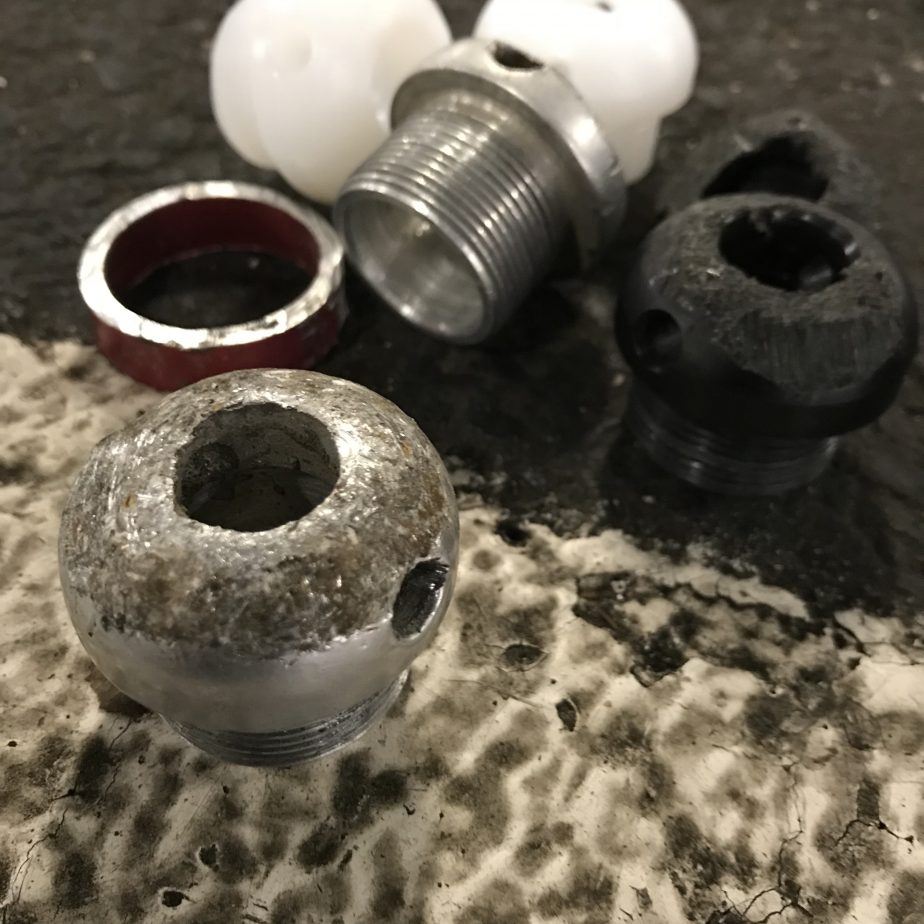 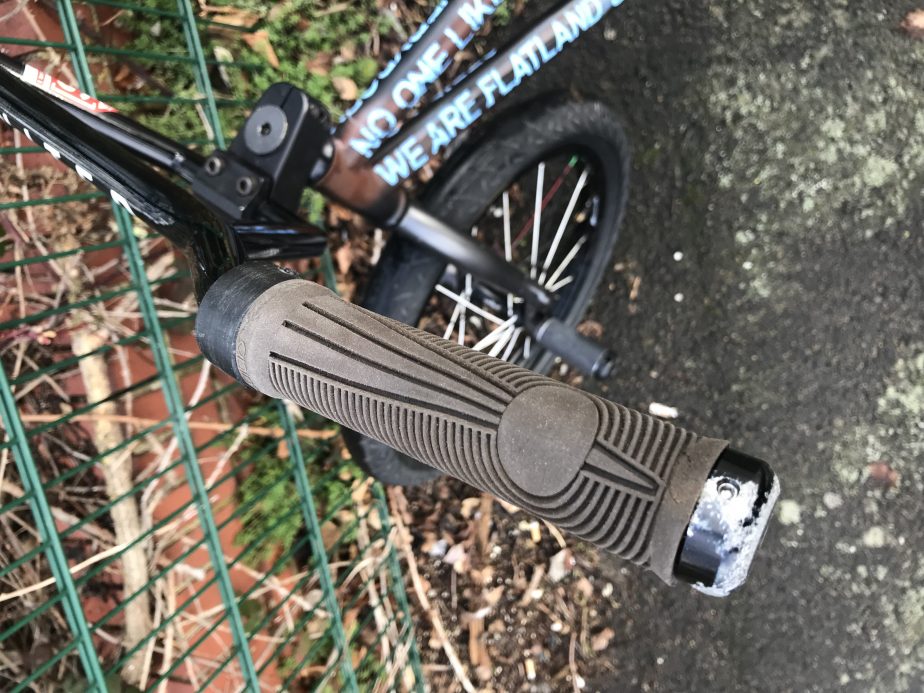 Seat/post:
The seat is a daily grind that came out a couple of years back. I liked the fact it didn’t have a bolt hole on top but could still use a regular pivotal post. Not sure why this hasn’t caught on. Underneath I have cleaned some of the plastic away and stuck a bit of old grip under there for comfort. The post is S&M. 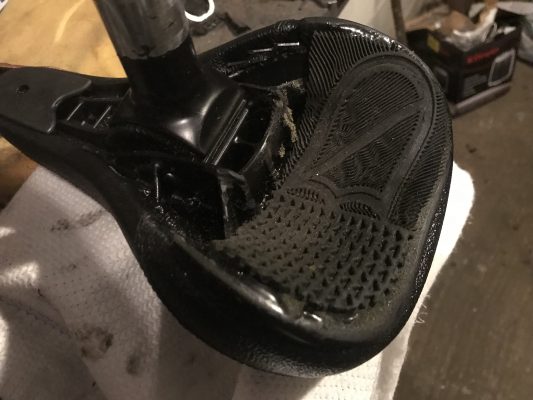 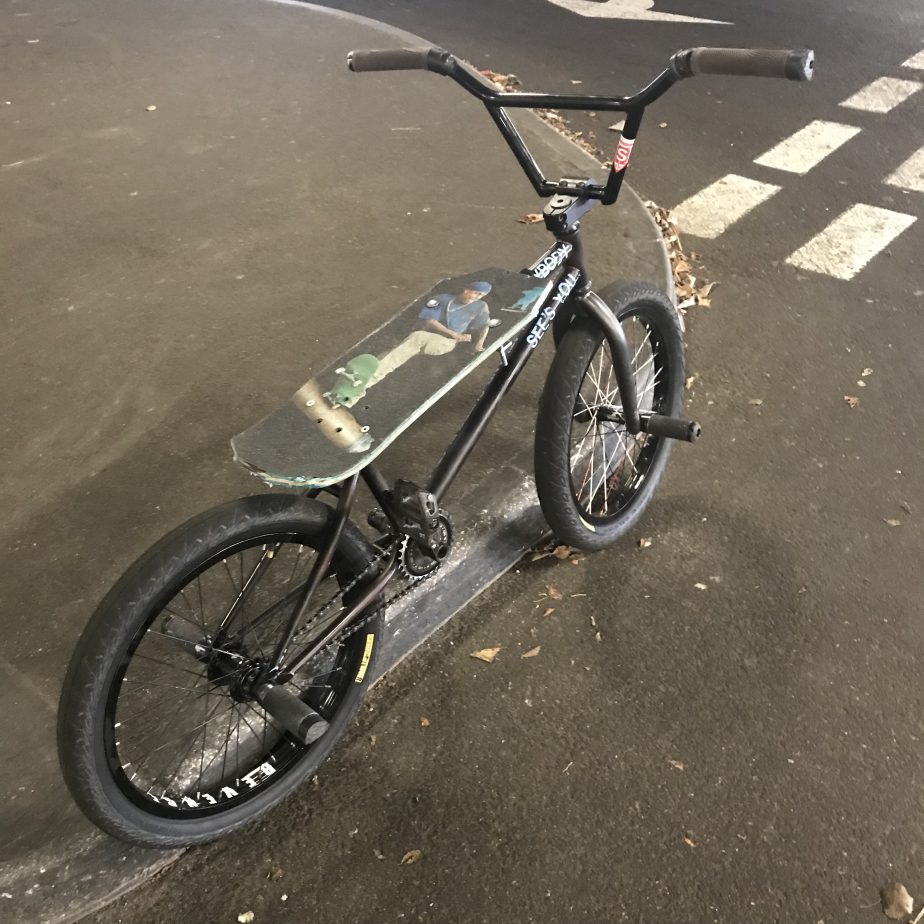