The first month of 2018, and already two awesome jams on the West coast and East coast of America. This interview came out as a spur of the moment thing where I was posting the news yesterday of Terry Adams winning the Gasparilla Jam. I wanted to know more about the guy behind the event, I hit up Jay with a few questions. Ladies and gentlemen here is the Jay Marley Interview! 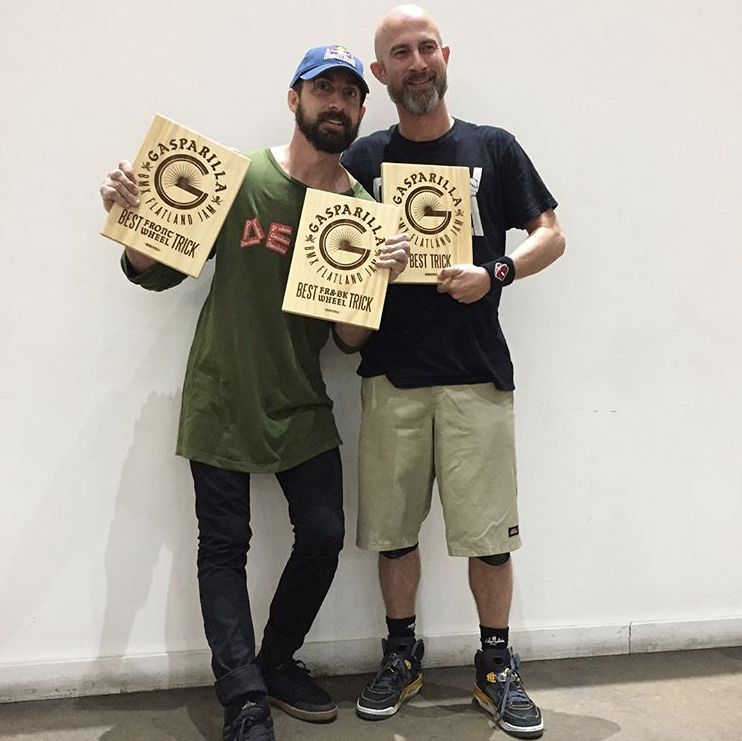 Hey Jay, the annual Gasparilla Jam just went down. Tell us about the history of the jam how this came about?
This was actually the debut of the Gasparilla Jam, but I’ve been hosting the Labor Day Jam for 4 years now. The timing was right to start doing 2 jams a year, and I chose Gasparilla weekend so the out of town / out of state / out of the country visitors could get a taste of the local culture in addition to BMX. Gasparilla is basically Tampa Bay’s version of Mardi Gras: Beads, Breasts & Booze with a Pirate theme.

The venue looks amazing, tell us about it?
I was DJing a friend’s private party for Gasparilla last year, and met the couple who own the venue. The husband is a B-Boy & Dance instructor,and is a huge fan of flatland, and told me I could use his venue for events. The offer was too good to pass up so I hosted 2016’s Labor Day there, and it went so well they told me I can do more than 1 event a year there if I wanted to. And that’s how the Gasparilla Jam was born! 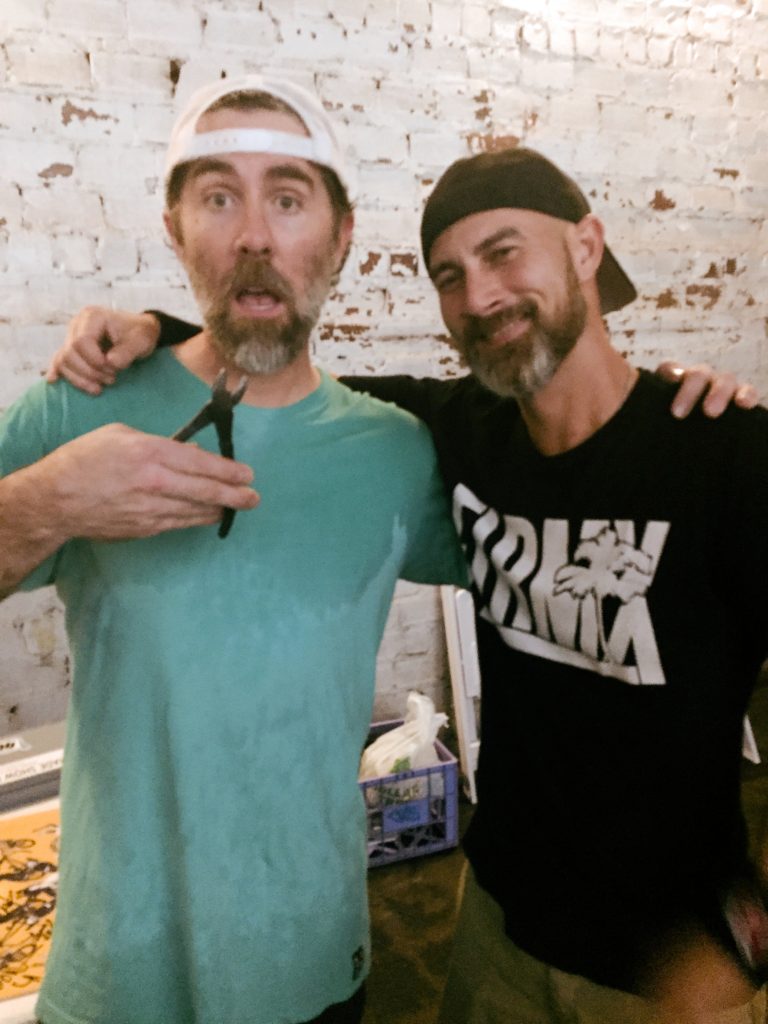 Did you try the floor out before you announced the location?
Indeed I did, it’s some of the smoothest polished concreted you’ll ever ride. It actually takes some adjustment because you roll faster with basically zero rolling resistance compared to asphalt, unpolished concrete, plywood, etc.

Who sponsors the event?
Profile Racing, Deco., Sampa BMX, 720 BMX Shop, FlatlandFuel & Shadow Conspiracy are my “main” sponsors as they have donated quite a bit to my endeavors and help make these events possible. 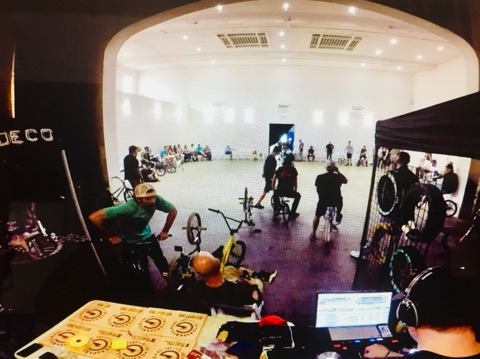 How many riders did you get this year?
Close to 2 dozen riders showed, of which about a dozen competed and since we had several Pros show up this time, I held a Pro Class event in which 8 riders entered. And we had about 100 spectators watching it all go down!

Who else besides yourself is involved making the jam happen?
Chad DeGroot is basically my partner on these jams moving forward, but he’s been a Judge for the Labor Day Jams the last 3 years. Marcos Paul De Jesus is my other resident Judge as well as main sponsor, he’s donated a Master Bikes Sampa frame for Labor Day Jams for the last 3 years. I was actually able to build a custom complete bike for the Gasparilla Jam
made entirely of Sponsor Parts: Sampa frame with all Deco, Profile, Madera & Shadow components. 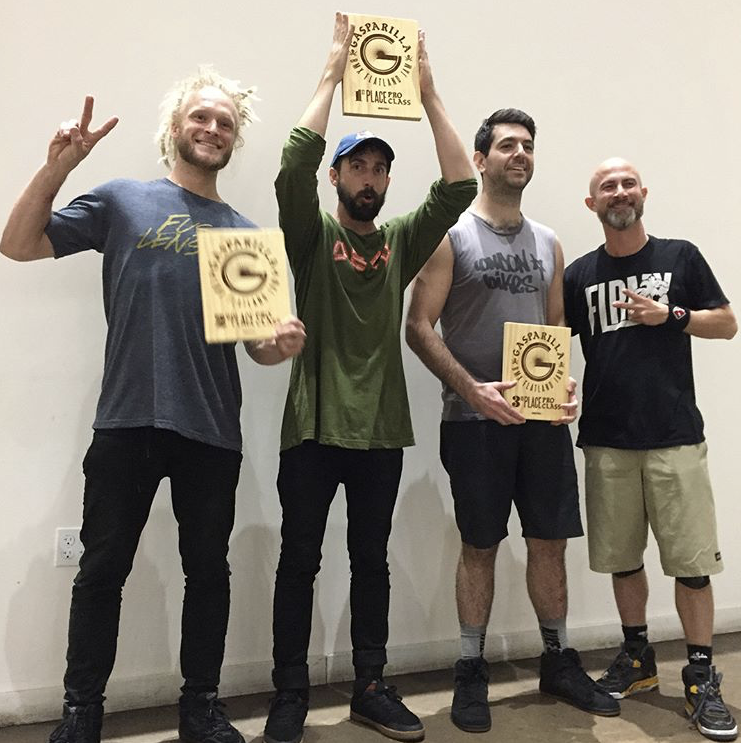 Mark Eaton as a DJ at your jam is a pretty big deal, how did that come about?
As with many freestylers my age (almost 46), the Dorkin’ in York videos are the Holy Grail of BMX, that’s where it all began for many of us.
We became friends on Facebook a few years ago, and we’re both DJs, so we have quite a bit in common. I asked if he’d DJ for the 2015 Labor Day Jam, and to my surprise he said yes!
Having Mark as the DJ feels like I’ve come full circle, as the influence he’s had on the sport is undeniable, not just from the Dorkin’ vids & their soundtracks he made for them, but also the many tricks he created & co-created with Kevin Jones that most of us are still doing 30+ years later. He stays at my house for a few days and the stories he has to tell are so amazing and often hilarious.
Honored to call him my friend! He’ll be DJing at all my Jams from now on when his schedule permits.

How does the event work with the awards for different styles of riding?
Since we started off kind of small, I wanted to have a more “casual” format for a jam, not so much about competition but wanting to take it back to the Old School of what we called “Jam Circles” – basically everyone rides together, no matter their skill level.

Each year we’ve been getting more and more heads showing up, and since several Pros attended this time, I had a separate “Pro Class” for the Gasparilla Jam. Terry Adams pretty much cleaned house yesterday with 4 out of 5 Jam Circles and took 1st Place in Pro.
Since Chad & Marcos were split on who won the Back Wheel Jam, I had Dax Wolford & Bo Wade compete in a “Tie Breaker”, and Bo won.

Who helped out judging?
Chad DeGroot & Marcos De Jesus are my resident Judges, and I’m the odd man out in case of ties as mentioned above.
And someday I’m hoping to have you as a Guest Judge as well Effraim! Just have to get better sponsorships to help offset my overhead on these events, which is finally starting to happen now that I’ve paid my dues for the last 4 years with the Labor Day Jams. 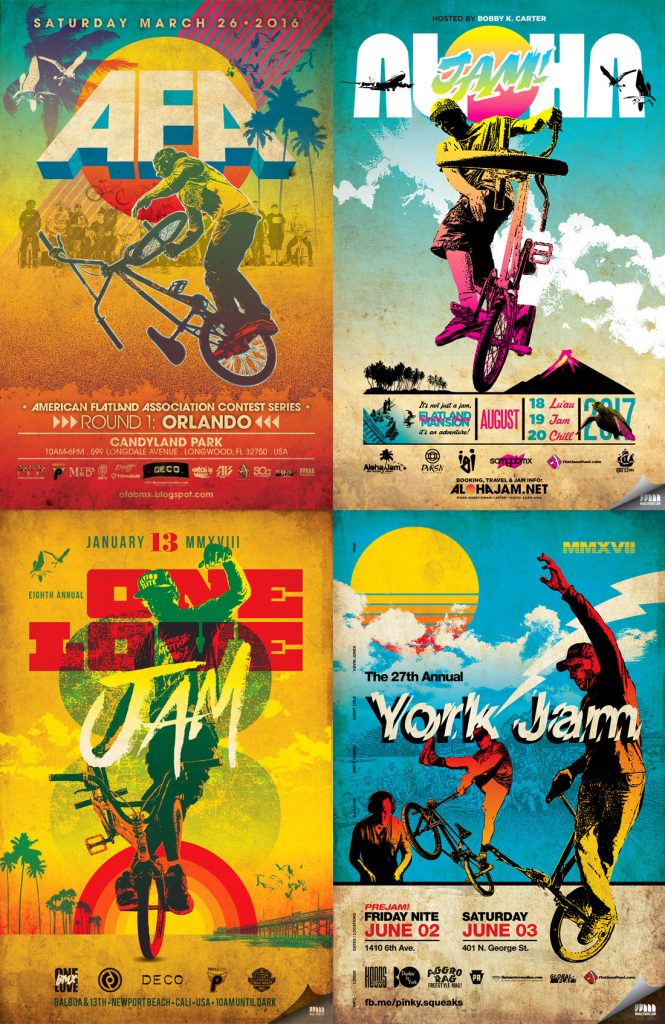 Your graphics are pretty infamous right now in the flatland scene, is that what you do for a living?
Haha thanks I’ll take that as a compliment! Yes sir, I’ve been a professional Graphic Designer since 1993. Started off doing Rave Flyers, mixtape covers & Vinyl Album Jackets, but have also held corporate jobs in the past at Newspapers, Magazines, PrePress, Offset Printing, SilkScreening, etc. Have been self-employed working from home for about 7 years now, and I DJ on the weekends to supplement my income and get me out of the house, haha.

Your personal highlights this year?
Having the opportunity to now host 2 flatland events a year, and getting Patrick of Flatlandfuel to make FLF branded sweatbands for my raffle. He hasn’t made them in over 10 years, and since it’s rather warm 300 days out of the year in Florida, they’re a crucial accessory.

Any plans for the future for the event?
I host these Jams for 3 very specific reasons: A) to give back to the sport that has given me so much. B) to get the next generation of kids into flatland because the American scene has been straggling behind Japan, Europe, Canada etc for quite some time. C) I want to make Tampa a flatland destination on par with events like Voodoo Jam in New Orleans, One Love Jam in California, Aloha Jam in Hawaii, Battle in the Rockies, etc.
Tampa has a lot to offer and since no one else is stepping up, I’ve decided to make it my legacy.

It’s been awesome catching up. Any final shoutouts Jay?
Shoutouts to Chad & Marcos for their involvement. Matt Coplon at Profile/Madera for being my biggest supporter & believing in me.
Mike Henry & Bart Hawk for helping me run the door & raffle tickets. Roy De Guzman for coming all the way from Long Island NY for the last 2 jams.
Mark Mundt drove down from Tennessee for the last 2 jams as well. Bo Wade, Bryan Huffman & Terry Adams for attending, which is why I decided to have a Pro Class this time. And last but not least Alexis Desolneux for coming all the way from France for this jam!

And of course to you Effraim for your hard work in promoting flatland, and to everyone that attends these Jams and the various other Jams around the world. Flat Matters!!!