It’s felt like a while since any new faces joined the pro class, this year saw Jean William Prevost explode onto the scene at fight with flight, good to see someone new in the mix, Jean has been killing it this year (fwf, toronto, and also jomopro), I wanted to know some more about him. Jean kindly put together a video for the interview also, check it out! 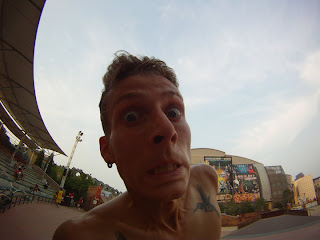 Ok lets gets this started, I don’t know much about you Jean-William, so please introduce yourself, where you are from? how old you are? all that kind of stuff
I was born on the year of the Tiger, 24 years ago, in the commercial hub of an old French colony named Montreal, Quebec. The French call us lumberjacks, but we consider ourselves the raffined branch of the two. haha…We have a decent flatland scene in Quebec. Daniel Boyer which rode for Cirque du Soleil for a few years, Jason Plourde and J-F Boulianne in Shenzhen doing shows for Happy Valley, guys like Simon Marsan and Francois Cote who inspired all of us into creating our own tricks and riders from one end of the province to the other killing it with different styles and switches.

So on a day to day basis, what is your first language, french?
These days, I speak mostly Chinese, being submerged in it and all, but my first language is French followed closely by English. Would love to learn Spanish and Japanese! I think learning a language opens up a brand new understanding of a people and their culture…same for flatland, it’s kind of like our own dialect!

How long have you been riding flat? What got you into it?
I’ve been riding for over 8 years now. I think it all started in the eighties when my Dad borrowed the movie BMX Bandits from a friend of his who had a movie rental shop. I watched it over and over again, amazed by how 3 kids could escape the bad guys after stealing their walkie-talkies…disabling them from committing some more crime. I guess that, in my head that’s where BMX Riders attained the level of superhero. As long as I can remember, I’ve been riding a BMX bike…I had a mountain bike once, and it got stolen within the month…so that was meant to be! 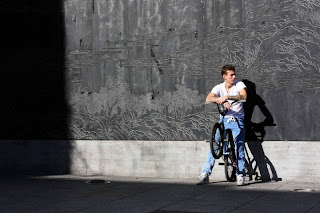 I saw few edits of you riding indoors, looks like you have some crazy good indoor facilities to deal with winter, is this the case?
There’s new skatepark (http://www.taz.ca) which opened up last summer…It keeps us warm during winter at the cost of 10 bucks a session. So it cost me almost 200 bucks a month to ride there last winter…It’s pretty much the only indoor spot we have to escape the blistering cold of Lumberjack land.

How long were you riding before you went pro?
7-8 years.

This year already you have made quite an impact on the Fight with flight and Toronto contest, how do you feel about that?
Feels like I can do a lot better! Fight with Flight was an awesome contest.

Who do you ride with on a daily basis?
In the winter months I ride with Mike Lubensky and Elias Odeh…but summer comes and I spend the whole summer riding alone at the Happy Valley amusement park I work at in Beijing. Except for during one or two CX-GAMES competitions here this summer, I won’t get to ride with many people…I met this guy named Henry from Holland who rides, he does some cool x-footed stuff.

Your bike has come in for quite a bit of attention, so tell me about your bike, describe the setup? I know a lot of people are interested…
The company is FarEast customs, originating from the province of GuangXi in South East China, you should be hearing more from them in the years to come…They’re now helping me out with parts and stuff.

What do you prefer the 3 minute run or battle format?
No preference, I like it all. I also really like the fact, that pretty much every contest format is different…That’s what makes our sport that unique, and if someone isn’t satisfied with the way a contest was held, then that person should organize it’s own and make it it’s own way.

At jomopro you had one of the best battles of the contest, that atmosphere was electric, of course not nice to lose but how did you feel after that battle with viki?
Felt humbled, honored to lose to Viki, whom I’ve heard of ever since I started riding and who has been pushing the sport bringing his own flavors and styles to flatland. I was really happy from landing that back wheel cross footed thing too…was thinking about that battle the whole drive back to Montreal…which took at least 30 hours.

After jomopro, you were off to china, how are you liking china?
This is actually my fifth time to China…I’ve spent more than three years total in China…Time flies by here, seems like everything sped up…I don’t know if it’s from doing what I like or just growing up in general. I can’t think of a place on Earth right now where the people are as motivated as the Chinese to succeed, this pushes me forward and in the right direction. The food, the pricing, the girls…….< How many shows do you do a day? Is there much free time to ride for yourself?
Three shows a day during the week, and 4 shows a day on the weekend…It’s demanding, but this gets my mind off every other thing I don’t want to worry about so I’m able to focus on riding only…I ride pretty much all afternoon everyday.

What for you are the positives and negatives of show riding if any?
Positive : Becoming stronger and more self-confident in front of a crowd, being good preparation for contests.
Negative: Riding tired, or riding on an injury.

So from the initial attraction of Bmx bandits does flatland still make you feel like a superhero eight years on?
I think anyone who puts any effort into what they love and persist will at some point feel like a superhero, because you can only and always get better. Progression is the most rewarding feeling on this blue Dot.

What do you miss about canada when your in china?
Definitely miss my family, I also miss my home spot in Chinatown, Montreal bahahah…The whole Montreal vibe too, it’s a nice place to live.

What do you do outside of riding? Do you work when your back in canada?
When I’m not riding, I usually study Chinese or write some verses, even draw from time to time or read books. Back in Canada I work at a bike company called Opus bikes on the assembly line. But that’s only for a few months every year. Play a lot of hockey during the winter, it’s good for cardio.

What music are you into?
These days mostly Hip-Hop and Dubstep.

Any final shoutouts?
Thanks to FarEast fo helping me out, and thank you Effraim for this interview!

Thanks for your time jean, keep shredding!