Ok, so thursday morning myself and step-son loaded up for Joplin, Missouri. The nine hour trip was a breeze and we arrived at The Bridge in Joplin. This place is amazing, the left third of the building is the Autumn Ramp Park which is an absolutely amazing indoor Skatepark complete with every imaginable ramp combination. The middle third of the facility is The Bridge which has an indoor rock climbing wall, Pizza stand, basketball/dodgeball court, internet stations, Rock Band on the big screen, and many other ammenities just for the kids. Finally the right third of the building is the Foundry, a concert hall complete with a juice bar. This was the flatland area, and where myself and many other flatlanders from around the globe would call home for the next few days. 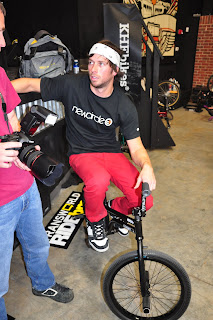 One of the hardest working people in flatland, Fat Tony took time out of busy duties for Transworld BMX, and earned third place in intermediates. Good job Fat!!

Upon arrival to the Foundry I was met by Fat Tony, who was working out some new links for the comp. Look out people, I know when he gets these on lockdown his flat riding is going to take off bigtime. After I checked out what Fat was doing, it was back outside where I met Lalo Jimenez. He was hanging with Koit and Eric Wright and was having major bike difficulty. After helping Lalo fix his bike and My boys from Texas showed up, it was back to the room to prepare for the action. 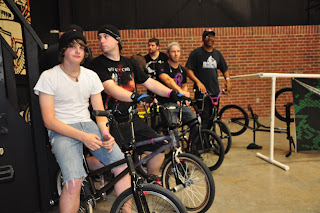 Intermediates in the pits getting ready.

This year I was allowed to MC the intermediate, and Vet classes. I had a blast and the riders put on a great show for the crowd. In the Intermediate class, Texan Jim McKay took  the victory back to the OG with smooth hitch-hiker jugglers and more consistency than any one else in the class. In second place was new friend Lalo Jimenez, original moves and a great guy to boot. Thanks to Lalo and Koit for looking out for my boy Tyler all weekend. You guys are his new heroes. Third place was originally a tie between Fat Tony, and Joplin local Cody Ward. After the runoff, Fat came out on top with high-speed rollbacks to peg-wheelie turbine to megaspin barspin. Fats been spending some time on his flat bike, and it shows. 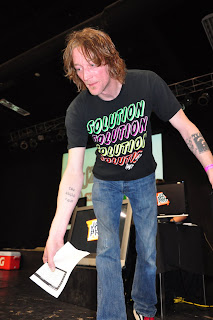 Joe Miller not only works hard on the flatmatters blog, but MC’ed most of the contest!

This years Jomopro saw the addition of the Veteren class for the flatland event. The turnout was great and all of the competitors seemed to have a great time. In first place was Tony “Mountaintop Fab” Strickler, this guys got a deep bag of tricks and pulled most everything he attempted with a glasslike smoothness.In second was Claude Hickman, anyone who’s been around a while has surely heard of Claude, great blend of older and newer tricks, all done with style! In third place is the rider only known as “Dangus”, this guy is a nut and actually punched a hole in the Foundry wall while attempting a fakie wallride after his time had expired. Special mention has to go to Mark”RadDad” Dandridge, I shared a room with Mark at this event and I assure you that this guy works harder for flatland than even I had imagined. On top of filming, interviewing, web-posting and site updating, he also competed in both the Intermediate and Veteran classes. Thanks for all you do Mark. 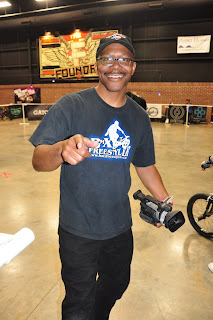 Next up, the Experts. First place was all Bryan Huffman’s this weekend. Bryan spun, flipped and swithed his way to victory with uncanny consistency and unparralelled style. In second place was none other than Texan Johnathon Tamayo, Johnny spins at a speed few can compare with, and his control was rewarded! In third place was Kelly Baldwin who was one of the more consistent riders of the weekend, even almost pulled his signature “Leap of Faith” Good job guys, and Kelly, thanks again for taking those pics!

On to the Master class, this class came down to who pulled thier stuff. The level of riding in this class is through the roof, and the top three guys were all dropping Amazing tricks to the delight of the crowd. In first was Jody Temple. I’m sure many of you have seen his video parts, but if not check them out. Jody has been riding a long time, and his originality and style showed just that. In second place, all the way from Pamama was George Vasquez, smooth style and outta control spins netted George the Two spot. In third was Isaiah Jordan, this guys brake broke the morning of the comp, so he just went breakless and still got third. Mad skills! 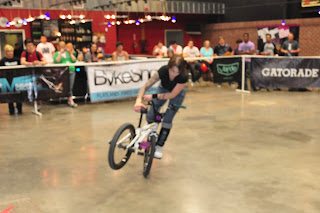 I would like to take some time to thank Pat and Katie from Flatland fuel, Paul Covey for all his hard work all weekend, as well as everyone who came out to participate or volunteer. You are all a huge part of this events success, and I can’t wait to see what the future brings.