I’ve known Brian for a lil over a decade now, both originally contributing to the pages of Dig Magazine to which of course Brian ended up being associate editor, now of course Brian works for ESPN, and still rides flatland a lot, mainly out of the media eye, which is ironic. Looking forward to his Same thing daily 2 section, without further a due, I bring you the last times with Brian Tunney, aside from being a great flatlander, he is probably the best writer in BMX. 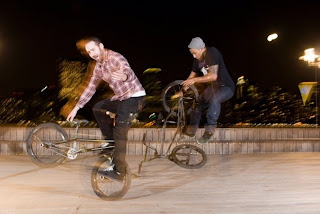 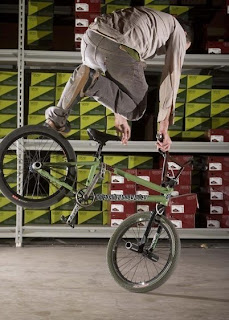 Last time you updated the Espn website: This afternoon.

Last time you rode street: Tonight. Last time you filmed a combo: Thanksgiving weekend, filmed by Jody Temple, whom was kind enough to drive two days North (in the cold) and put up with my BS.

Last contest you entered:It might’ve been one of the FBM Ghetto Street Comps and it might’ve been a Metro Jam. I’m not really sure. There was a point in my life when riding in comps really didn’t matter, but nowadays, I couldn’t do it unless last place in the old boring class was guaranteed a lot of money.

Last time you had two brakes:

Last time you did hitch around the worlds: It’s my warm up trick every time I ride flat, so yesterday.

Last videopart you filmed for: Same Thing Daily 2 (still hopefully getting a few things done before the deadline)

Last time you rode in the wet: I pedaled my bike in the rain a few days back. Does that count?

Last time you screamed outloud after pulling a combo: I don’t scream too much. There’s been a few times when I’ve pulled new links and said, “I am the smartest man alive,” just like Adam Sandler in Billy Madison, but that’s about it.

Last time you wrote something for Dig: It’s been a few months now.

Last time you were in the UK: October for the Nike Tunnel Jam. Afterwards, I took the train from Portsmouth to London, walked around for a day and a half, then came home.

Last time you checked flatmatters: I check it every day.

Last time you covered flat on Espn: Last week for Martti’s Jungle Rider announcement. And coming later on this week, a feature called “Ten Reasons to Pay Attention to Flatland.” (I actually do my best to cover every aspect of BMX, including flat and racing.)

Last time you did a double decade: Never in my life. Like Jason Brown before me, I was always more partial to smith decades. I really need to put back brakes on and do some more. And I still need to do an abubaca to smith decade back in before Mark Webb gets to it.

Last time you rode with Jay Jones: It’s been years, but I’ll relay a funny story from one of the last times. I was riding with Jay at a place called Metro Park (about 20 miles from my dad’s house, maybe 10 from Jay’s parents). I fell hard on my thigh, breaking the key to the car in my pocket. Realizing what happened, Jay drove me home, waited while I searched for my spare key, then drove me back to the parking garage. I drove home that night pretty psyched on the idea that one of my teen-age idols was a decent person too.

Last time you hung out with Leif Valin: Interbike ’09.

Last time you were bummed on flatland: Falling on my ass in 32 degree temperatures last week.

Last time flatland made you smile: Watching a certain Athens, GA flatlander get into some good “discussions” on the Global Flat message board.

Last time you threw your bike: I never really got into the bike throwing thing. There have been a few times in the past few months where I may have motioned to throw my bike, but quickly realized that I hate fixing my broken bike more than I hate being frustrated because of not pulling a trick.

Last time you rode: A few minutes ago.

Last time you kissed a girl: A few minutes before I went riding. Her name is Heather.

Last time you were drunk: Drunk is such a relative term.

Last time you rode with the Animal crew: A few minutes ago, followed by sitting around while Bob Scerbo, DJ Mr Green and a Jersey City hip hop duo named Animal Crackas worked on music for the new Animal video. 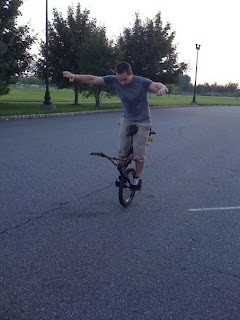 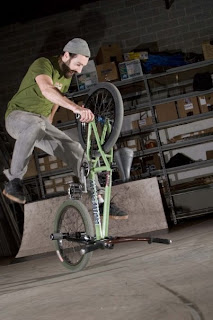