This weeks first “last times” is with Korean rider Kwon Seongtaek, Kwon now lives in Finland with his wife, I met him at the groundtactics final, always nice to put a face to a guy I chat to a few times a week. Kwon rules, super tech riding style.Keep an eye out for an edit soon.. 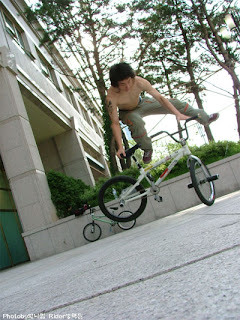 Last time you competed:
The last one was King of Finland 2010, a national BMX championships which I won the title. As I started rather serious pratice this year, I anticipate more from next year. Hopefully the KOG series in Japan as well.

Last time you were drunk:
Extremely rarely I get drunk though as I am gifted to have ability to digest alcohol faster than others.

Last time you rode in the rain?
I never wanted to ride in the rain before but I happened to read someone’s interview from Flatmatters that flatlanders from U.K. do rolling tricks more as it’s all the time wet there. I realized that there’s no need to whine and hate rain when you can actually go out and ride in the rain. So yesterday I did it lil’ bit but it was only for testing my new bike setup.

Last time you rode with Martti Kuoppa?
It was Ground-Tactics times. When I came to Finland, I was so excited to meet Martti Kuoppa and expected to be riding and have some parties together. But maybe because of the fact that I always lived too far away from his place? I rarely even see him here.

Last time you got a puncture?
I rarely get any flat tires. But yesterday, my brand new tire was faulty and a surface of it got ripped.

Last time you threw your bike?
Not today but my last sesh. Just to look tough. 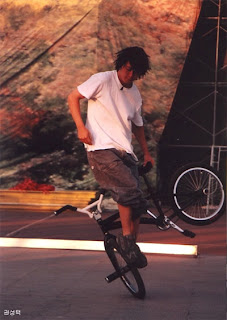 Last trick you learnt?
Backward whiplash today. Hopefully get used to it fast so I can do it with other tricks soon.

Last trick you invented?
If the links are not concerned, the trick is one foot in another side of frame pumped blender.

Last phonecall you made?
Last Saturday.

Last bikepart your brought?
In fact I am putting the front brakes on after being brakelss for ten years. So I got now KGB space2 fork with upside down v-brakes set, pedals, chain, seat, grips, barends, tires, and stem. Now I am expecting a new frame all the way from South Korea.

Last time you did a double decade?
I haven’t learned it.

Last movie you watched?
I sometimes watch random one from TV and last one I half watched is Johnny Depp movie some pirate odd stuff.

Last online edit you downloaded?
Last one was some European competition footage many years ago. Nowadays I watch it directly from Internet.

Last time you were home in Korea?
It was February 2009 just for fun. My friends from Finland joined me too. Daily party. A way to go!

Last time you worked out?
A few years ago. Push ups.

Last time you got injured?
If the ordinary shin wounds aren’t counted, about 12 years ago head skin ripped by a handbar of a road bike on the way to school.

Last time you went to Helsinki?
10th of September. I wanted to see Aleksi Ritsilä’s new trick and it was a day for a sudden jam a day before Finnish crew’s trip to Estonia for a jam. I didn’t go to Estonia but I had a lil session with local riders there.

Last jam you went to:
Helsinki jam as mentioned above.