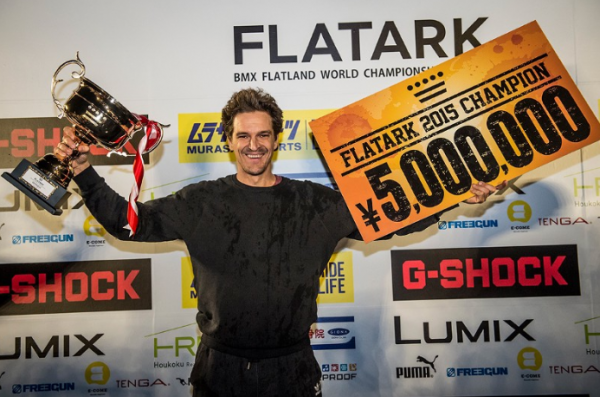 “October, 25th 2015. Kobe, Japan. The air is electric. Everybody is waiting suspended in time for the results of the FlatArk, the biggest BMX flatland contest in history. All the big guns made the trip to try to grab the biggest prize money ever. A pack of wolves ready to battle to death. And battling in blood sweat and tears they did. Especially in the finals where current World Champion and crowd favourite frenchman Matthias Dandois faced officially retired Martti Kuoppa. But the unexpected and most theatrical of situations happened: the Finnish rider won the gold and the $40K taking it back to the essence of flatland by pulling some of the hardest and most original tricks of the contest.
How could Martti pull such a monumental achievement as he had not entered a contest in 6 years? And what the hell is BMX flatland anyway? Listen to this modern tale of a true modern hero.”

Lionel Cardoso caught up with Flatark winner, Martti Kuoppa to talk about how he could achieve this win after many years away from the spotlight. Hit the link below for a great read: