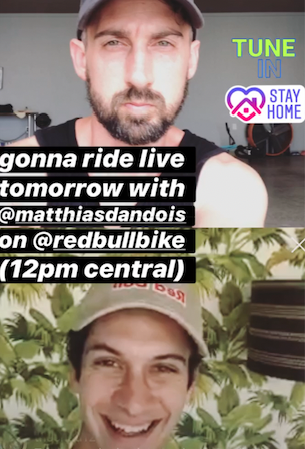 Stuck at home and wanting some live riding entertainment, Terry Adams and Matthias Dandois will be battling live on insartgram later today, read on!

“Today, Matthias Dandois and Terry Adams are going to be putting on a show for fans from their respective homes in very different parts of the country.

Matthias will be in his tight NYC apartment he shares with girlfriend Constance Jablonski, battling Terry who will be in his slightly-more-spacious garage in Hammond, Louisiana. They’ll be battling each other virtually in those tight spaces, trying to make the most of the current situation and give fans watching live tomorrow @12pm CT on @redbullbike something to enjoy.”