Welcome to a new section on flatmatters, New Breed, is dedicated to Am riders, you guys are the future, you are the riders buying parts helping the pros survive, spending your last pockets of change to get to a contest, (this can happen in pro life to.) Sometimes I feel Flatland can come across very elitest, all you see is incredible riding, how do you get to that level?, and maybe you are a beginner and cant relate to it at all. New Breed is an attempt from myself and Joe Miller to give you guys some coverage, encouragement and respect you deserve. Keep riding! 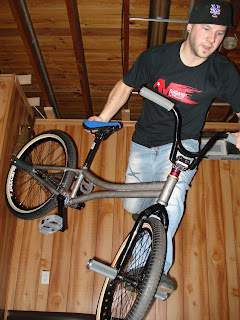 Ok, tell everyone who you are, where you call home, and how many years have you been riding?
I’m Steve Lapsley, I’m 27 and live in Buffalo, NY, USA!  I’ve been riding flatland on and off for about 10 years or so, with a 5 year break from ’03-’08 while I was in the Army.

Now you are the Mastermind behind the Am circuit. How did you come up with the idea, and what are your goals for the circuit?
I wouldn’t call myself a Mastermind! Hahaha. I came up with the idea about 2 years ago actually.  I bounced the idea around on Global a bit and got a pretty positive response.  It came from a combination of ideas and thoughts.There has been a lot of talk about the lack of “Pro” flatlanders in North America I read a bunch of opinions as to why that is and opinions on how to fix that.
More big money contests in the US, more sponsorship support, more peer pressure etc.
I looked at it from a different angle though, from an amateur perspective. Over the last few years I have been to a few events and one thing I noticed was TONS of amateur flatlanders attend these events! 40 plus amateurs in Toronto is almost the norm. Last year at Fight w/ Flight there was over 40 amateurs in attendance. To me, the problem wasn’t how do we get more pros in the States, but how do we get more amateurs to actually compete and not just show up! So I posted the idea on Global again this past year and decided to just run with it. Some of the big names in the US flatland contest scene contacted me and said this was long needed and to take it to what ever level I could. I basically just took that motivation and have been going with it since. 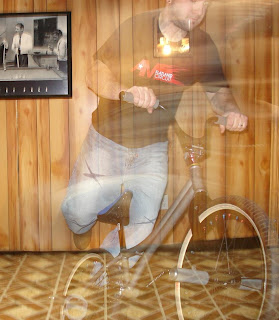 As far as goals… I think I have already exceeded them! Haha. 43 amateurs came out and actually competed in Round 1 of the circuit (Red Bull Fight w/ Flight 2010)! So I guess my new goal would be to have that trend continue! I want the circuit to help push AMs to get together, inspire each other, support this sport and compete. Also, I’d like to get a Beginner Class for the circuit next year.Not all the events were having that class this year.Fingers crossed for next year!

When we spoke @ FWF I got the impression that you felt the Am circuit would help Ams of all levels be able to guage where they should compete, such as when to move from beinner to expert, to master, and eventually Pro. Are there going to be hardline criteria, such as say master year end champ must compete Pro the following year, and so on down the ranks, or is it more of a guideline to guage where you belong class-wise?
Flatland is a very personal form of BMX. Each rider sees their riding in a different way and on a different level. I would like to think that the circuit would push the top Master Class riders to go up to Pro. However, it is a very personal decision and I will leave that up to the riders for now. As far as going from Beginner to Expert, or Expert to Master.Yes! There will eventually be a hardline criteria for moving up.

Being from Buffalo, which is worse, the winters, lack of flatlanders, or the Bills going to the Superbowl four times in a row and still no title?
Ha! I don’t look at it like the Bills lost 4 Super Bowls. I like to be a cup half full guy and tell myself that they were the AFC Champions 4 years in a row!
The lack of flatlanders in Buffalo isn’t that big of a deal. I have basically been riding by myself for as long as I have been riding.  I am pretty close to Hamilton, Ontario and there are a bunch of riders up there (within 45 mins to and hour from me). I try to get up there to ride with Adam or Winter is the worse of all the above! It is snowy and cold and icey for about 5 months out of the year and there are no indoor or undercover spots for me to ride. I basically take the winter months off. I try to keep the rust off a little bit by riding in my basement or garage though.

Sorry ’bout that last one Steve, just had to know. So when you are riding, do you find it easier to learn established tricks, or do you prefer creating your own tricks/switches?
At the level of riding I am at now I’d say learning established tricks. I need to learn the basics/established tricks before I feel I have enough bike/body control to invent my own tricks. I do try to add my own style to whatever it is I am doing though.

When did you first see Flatland, and who/what got you started?
This is pretty cliche but… RAD! I think I first saw the movie Rad when I was 5 or 6. I have been hooked on BMX ever since.

Music is a huge thing for a lot of riders, what are your top five songs/artists at the moment?
I listen to a bunch of different styles of music. Right now I’d have to say…
1. Matisyahu – Struggla.
2. Drake – Uptown.
3. Common – Announcement.
4. Kid Cudi – Soundtrack 2 My Life.
5. Mos Def – Life In Marvelous Times. 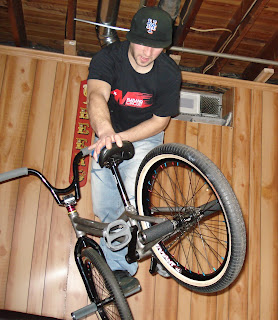 I’m an Indy guy, so winter makes it really hard to ride. I think Buffalo may actually mean SNOW in some native American languages. How do you get by during the winter months, does it drive you crazy?
I watch a ton of flatland web edits! I mess around with Twitter.I try to resist the urge to switch my bike/parts around. When all else fails, I ride in my basement!

I see soooo many possibilities with the AM Flatland circuit, any plans to make it global in the future?
I’m just letting it go where it goes right now.I am trying not to set my hopes too high.There has only been 1 round so far.But hey, never say never right!

You told me at FWF that you were really pushing for the Master class at all four of the events this year. How do you think the experiment is going so far?
Well I’d say it went great! There will be a Master Class at all 4 stops on the circuit. I can honestly say that it was the guys at Fight w/ Flight (Alan Young and Jake Jackson) that pushed the Master Class. Jake called me up to tell me there would be a Master Class for FWF and I tried to find ways to make it work with the circuit and my points system. The best answer was to see if all the other rounds were going to do it. I think it was inevitable whether there was an AM Flatland Circuit or not. The diversity in the level of riding in one class is too great. I know that the guys in Toronto for the CFO have been mulling over the idea for years.Everything just fell in place this year.

I spoke with Todd Gully from Chicago at FWF, and he said jokingly that the Master class should be called “Pro’s with Jobs”. What’s your take on who should ride master and who should ride Pro?
I believe that going up to Pro is a personal decision that each rider has to decide on their own. However, I think some riders just need that little bit of a push to make the jump. It would be awesome if the AM Circuit helped facilitate the jump.Eventually I think it will.

I would like to take this opportunity to thank you Steve, for all your hard work and dedication. Anyone you would like to thank?
A bunch of people have helped me get this thing going. The sponsors of the AM Flatland Circuit… Pat for FlatlandFuel, Hector for Byke Project, Ron for Sulfer Blitz and Tony for Mountain Top Fab. Those guys are great and have been HUGE in helping me out! I want to thank my wife for supporting me and putting up with me sitting on the computer and phone everynight working on AM Flat Circuit stuff. Everyone I have bounced ideas off of… Hector Garcia, Lee “Huck” Edwards, Jake Jackson, Alex Poirier, Prasheel Gopal, Pat Schoolen, Bryan Huffman… My dad for helping me create the point system.

Thanks again Steve, for taking time to make this interview both informative and inspiring. Any last words of advice for someone wanting to be a Flatlander?
Just ride!The AMs are the future of this sport! See you at one of the stops! Oh, and buy a t-shirt from me live at an event or on flatlandfuel!Hahaha! Support the cause! Thanks Joe! 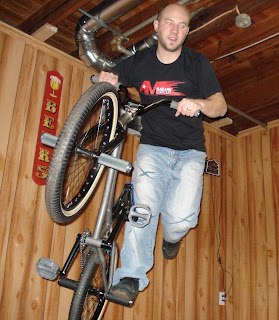