Yesterday we featured the first exclusive shots of Fat Tony’s 2011 flatland calendar as well as a lil’ interview with the man behind the project. Today we go behind the scenes for the first of two articles, on what goes, outtakes, and lil insight is aways a treat!Enjoy!

Alex Proshin. Photo by Alexander Bivol in Russia.
This photo was submitted by Saint Martin, but of course since the calendar is horizontal, it wouldn’t fit. Luckily Alexander Bivol had another photo of Alex that worked out perfectly. 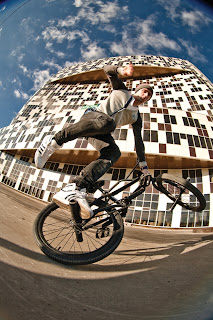 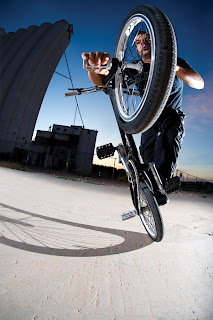 Chad Johnston.
Photo by Fat Tony in Long Beach, California.
While Chad was warming up for our photo shoot for the S&M page of the calendar I snapped a few feeler photos as I was walking around the perimeter of the spot trying to find the angle and composition I wanted to shoot. This vacant gas station is only two blocks from our houses and is one of Chad’s regular riding spots. 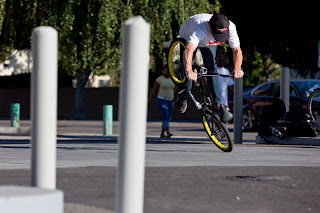 Dane Beardsley.
Photo by Fat Tony in Springboro, Ohio.
Dane doesn’t like to shoot photos in places he doesn’t normally ride, so when I met up with him at the DK headquarters in Ohio it was the perfect opportunity to shoot at one of his local spots. Even though Dane lives in Georgia, whenever he is in town he sessions inside this warehouse, which, at the time was filled to the brim with boxes of complete DK bikes. After snapping this lighting and focus test shot I ended up taking the calendar photo from the highest shelf in the warehouse. 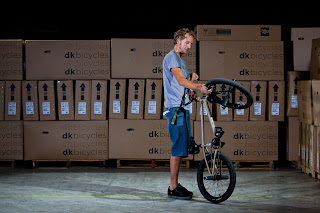 Matt Wilhelm.
Photo by Fat Tony in Chicago, Illinois.
Just about every photographer that shoots with a digital camera has countless photos like this…a dude standing where he will be riding so we can check our composition and lighting. This was the second year in a row I was able to make it to Chicago early enough that I could snap a few photos of Matt before heading out to cover the Dew Tour for the Ride BMX website. 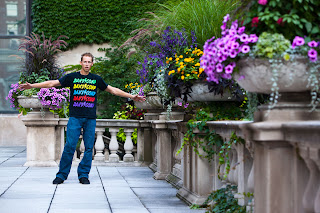 Matthias Dandois.
Photo by Fat Tony in Barcelona, Spain.
The photo that is on the cover of this year’s calendar was one of those rare occasions where I set up a photo and got the exact shot I was looking for on the first frame. Since it was so easy to get my shot, I figured I might as well get a second angle of the trick while the lighting was already set up. This is that second angle, and of course, I don’t like it nearly as much as the original photo I set out to get. 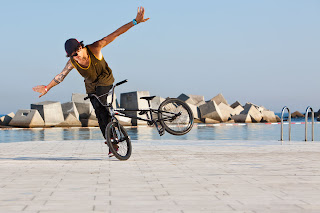