Intro-EC.
Text- Mike Garrard
Back in the early 90’s, many of you will remember I used to produce a ‘zine, “Totally Intense”, one of my favourite parts about producing the ‘zine was the interaction with riders worldwide. The zine got as far as New Zealand, which I couldn’t believe that, Mike Garrard regularly kept in touch and started sending videos of their scene, which I was blown away by, incredible riders (Kerry Gatt most famously, Dion Geaney, Parris Whakarua to name a few), they went by the name “Sidewalk Dorks”). These riders had such an influence on my riding at that point in time, it’s always a sad time to lose part of the flatland family, Dion will be remembered forever by all those who knew him.RIP Dion Geaney. I’ll pass you on to Mike who wanted to say a few words… 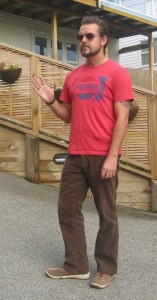 Hi Everyone, my Name is Mike Garrard from New Zealand, I rode Flatland from the mid 80’s until 1999.
On the 24th of April 2011, I lost a Great friend and Flatlander Dion Geaney. Dion may not be a familiar name to most of you. But he rode with Myself,Kerry Gatt, Parris Whakarua, John Sherman, Simon Stojko Faulk, and in the USA, Dylan Worsley, Chad Degroot and the Big Daddy Kevin Jones and many others.

I first met Dion back in 88 I’d returned from the USA where the scene was huge at the time. Back in New Zealand there was no scene, but I met Dion and we built up a small scene together riding whenever and wherever we could. Eventually more Rider’s appeared on the Scene. One of them was Kerry Gatt who still rides today.

I got in contact with Effraim back in… (help me out here Effraim) I think it was 93?(Editors note: Correct)he had his
“Zine” back then Totally Intense Zine he interviewed me, and in another issue Kerry and Dion. It was through Effraim’s Zine I met another rider, Colin Smith from Scotland (S.O.B Video).
We had our Scene it wasn’t big, but we made up for that with our passion for riding.

I returned to the States in 92 my first time back since 88, the scene had changed but the Rider’s who did ride were truely Hardcore. Dion and Kerry wanted to see for themselves but it wasn’t until about 95/96 that they got their chance. Kerry decided to try and stay which he did. Dion after riding (and impressing) his Idol Kevin Jones, returned to New Zealand. I believe it was 97 when Dion stopped riding he no longer had Kerry, Myself or Dylan Worsley or Kevin Jones to ride with I think that’s when things went downhill.

Dion started Drinking and taking Drugs, but it was Drinking that ultimately caused his demise. I got him to come out and ride one time I think in 97, but he didn’t stay long it was obvious he wasn’t feeling it.
That made me very sad, I truely believe he could have been a World class rider, but it wasn’t to be.
For the better part of 15 years, Dion battled with Drinking and Drug abuse I only saw him twice during that time. On the 24th of April 2011, his Body gave up and he passed away at 1.30 in the Morning, he was 37.

Before he passed away, I had arranged with Dion’s Mother to go and see him in Hospital but I didn’t get the chance.
Dion was so talented at everything he did not just riding, but Art and Music as well. With Dion, it was all or nothing I attended his Funeral and it was the saddest day of my life! he was like the Brother I never had.
I wish I had pics of him riding (digital pics) but I don’t I gave all my regular pics of him riding to his Parents.

The reason I wanted to do this was to make sure Dion was never forgotten but also to tell you to live everyday
Like it’s your last ride hard and always be passionate about whatever you do in life just like Dion.
Take care my Friend I love you I miss you I’m sure you are at peace now.

Mike Garrard.
Below is part of the “Sidewalk Dorks- Mooses” video (produced by Dion) – and a link to some of Dion’s art.
If you have never seen Dion ride before 3:45- first link from Dion.