Flatland is a family, and especially here in Spain, we are lucky enough to have a big family that celebrates and enjoys flatland a lot. Of course everyone knows Viki Gomez, and Alberto Moya, Guelo Monzon, Miguel Tardio, Varo Hernandez, and slowly Mario Correas are familiar names tomost and have been moving around the planet to contests for years, but Vigo and O´Marisquiño is a celebration of all Spanish riders, those just starting and those that have been riding forever. This was the 15th Marisquiño and at least the 7th time flatland has been involved. 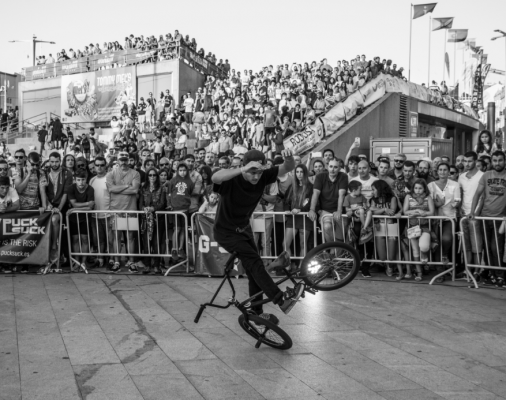 Vigo is a beautiful Galician city on the northwest side of Spain with amazing beaches, the best food in Spain, and a high respect and understanding of extreme sports. The town, at least, on the weekend of O´marisquiño becomes a village of extreme sports with people from all over Spain and the rest of the world showing up to ride, relax, and party.Varo Hernandez organized this years Quemada Flatland Contest. When I showed up I recognized a lot of people but was also excited to see a lot of people I didn´t know. There were 18 riders that participated in Amateur class! In Pro Mattias Dandois (who has been coming for at least the last four years) and Gurvan Le Blo´ch showed up from France as well as Kevin Nikulski (who is also slowly becoming a familiar face at Spanish contests) and Markus Schwital came down from Germany.

Of the 12 riders in Pro class, 9 were from Madrid. Although this is a national contest and a few of the people in Pro would typically be in Master in an international contest, I want to point outthat Madrid is a force to be reckoned with. If you apply the formula of Madrid to the rest of theworld, the level would be off the wall. The formula is practice by yourself, practice with your friends, do Street shows in the center all night Friday and Saturday. High level, imagination, andconsistency. This is also why crowds at o´Marisquinho love flatland. Friday Amateur went down with the 18 riders having one 90 second run. I have just pumped upthe Pro class, but Amateur was just as exciting. New galician riders were in effect, three in total,Marcelo Muñiz, Fran Villaverde, and Aaron Santos, exciting to see new faces that are there because they fell in love with flat at O´Marisquiño! Along with them Iston from Panama and riders from Salamanca, Barcelona, Madrid, Valencia, Zaragoza, and Bilbao competed in Amateur. Everyone was screaming and Guelo Monzon, who made the decision to compete and MC the contest was jumping up and down and hyping the crowd up only in a way that someone with as much passion for the sport as he does can. 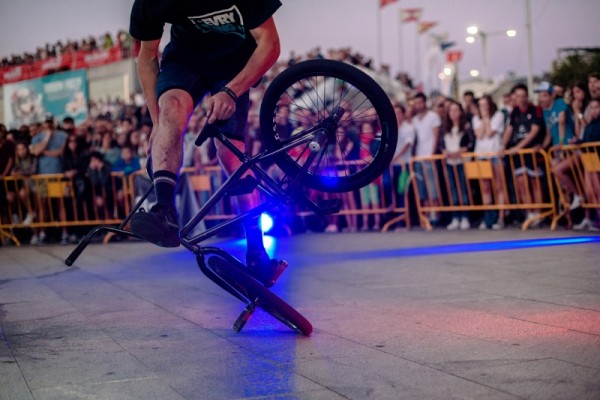 Mario Garcia in the light, finishing a respectable 4th place.

Pro qualifying was right after Amateur. One two minute run for each rider. Everyone rode greatand the vibe was set for the next day of riding. In some ways, we are lucky to be the size we are. Of course it would be great to be the size of Street just to ride with more people and have the power to look for more sponsors, but in other ways we have a nice position where we control everything and enjoy the friendship in a way that Street riders haven´t in a while. In Vigo we don´t rush, we party every night til dawn, we wake up late and go to the beach, and start riding after five pm. There are so many people in Street that the contest starts at 10 am and seems so rushed. Much respect to Street riders for waking up so early. I’ll stick with Flatland.

The nine riders who qualified in Amateur rode at 7pm, everyone rode well and the energy was very high with everyone pushing each other to ride better. Standouts for me were Kobi Valero from Valencia (represent!) who came ridiculously close to pulling decades, landing on parts of the frame that i didn´t know existed and mixing oldschool and new school; Toni Raba from Barcelona who has been riding forever and it was his first Marsiquiño. Bar ride, old school, new school, Smith decades; Remus Simion from Zaragoza who is a beast in his own territory but missed a few tricks, he still pulled cliffhanger and hitchhiker.Iñigo Arroyo from Bilbao is someone I saw ride for the first time 4 years ago. He looked like he had never seen a bike video and rode really free of rules. Time has passed and we have all given him advice which he has taken or not. He has foot jam decades on lock, backwards hitchhiker, gerators, dumptrucks, rolling, scuffing. So psyched to see him win amateur.Pro started at 9pm. Varo really wanted to make the pro contest like a crazy party. We waited fordusk and there were colored lights, tasteful techno music, and a smoke machine mixed with Guelo Monzon going absolutely nuts and a super intense level of riding. Riders rode in heats of three, each rider having two one minute runs and a last trick. Jam circle format really kept riders relaxed and kept the Crowd freaking out.

The highlights for me were Santi Notario reluctantly riding in his second pro contest, accidentally getting knocked off his bike mid death truck, getting up, taking a break and killing itagain. Alberto Moya pulling his new cross footed pedal trick in a contest and the rest of his original and difficult combos. Better start inventing some names for all that stuff, the japanese are watching…Guelo Monzon announcing the contest with all his energy and taking a break to pull his massively hard 360 pivots in the contest. He is a favorite at o´Marisquiño and his riding in the finals was brutal.
Nikulski’s spinning seems so dangerous. He held back nothing and that cross footed time machine is so flattened it´s like a tabletop.Markus Schwital rode great all weekend but lost it a bit in the final. His last trick was amazing and Guelo was screaming at least thirty seconds during the final time machine. The crowd lost it and all the Spain crew rushed him. 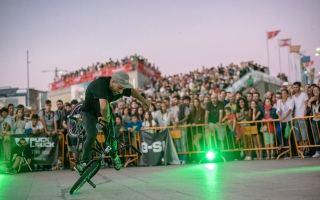 Moya preparing to 3flip cliff under the lights of Vigo.

Gurvan Le Blo´ch is a name I didn´t know but at 17 years old he is a name to watch out for. Dope style and the forward time machine on the seat tube is dope. David Carmona was helping Guelo as cheerleader but still rocked a solid run of wheelchair to backyard and big steamroller to exit jumps.We tried a new judging system this year, it included a formula to calculate consistency with four other categories, style, variety, originality, difficulty. It has it´s flaws, it has it´s advantages. What I noticed most was that seperating what makes flatland flatland make every rider less
unique. And the uniqueness of every rider is what makes flatland. All 12 riders rode amazing, that is beyond clear.Top Five:Fifth: Varo Hernandez, smooth as glass, hard switches and a really nice rocket wheelie to 360 pivot to dumptruck.Fourth: Mario Garcia Correas, rocket nose wheelies, timemachine on the pedals to steamroller, style infinite.Third: Miguel Tardio: Smoothest Madrid Rider for sure. Nerves like Buddha, cross footed whiplash using the pedal to recross ending in a cross footed nose wheelie with his arms and fingers completely extended and a run of cross footed nosewheelie to wheelchair ending in cross footed g-turns on the back wheel to decade. It doesn´t matter that he doesn´t talk much, his riding speaks volumes.

Guelo killed it on the mic in Vigo, and really showed a lot of emotion to all the riders during the finals!

Second: Viki Gomez, you know Viki. Always amazing, always doing the hardest tricks, always riding smooth and the best saves. Long hard lines like always.First: To me, video will never be able to capture what is happening at a contest. Mattias jumps higher, extends spins longer, does really hard shit, period. That no handed halfpacker is unreal live. People mark the end of the year with Christmas, I mark the end of the year with O´Marisquiño.For me it is the best contest, the best vibe, the people I have ever met. For a long time Cologne was the biggest contest of the year and the place where everyone came to meet. Now that Cologne seems to be gone or taking a break, I hope everyone in the world comes to Vigo next year to enjoy the best Flatland, beach, party vibe that I know. Next year, next level.