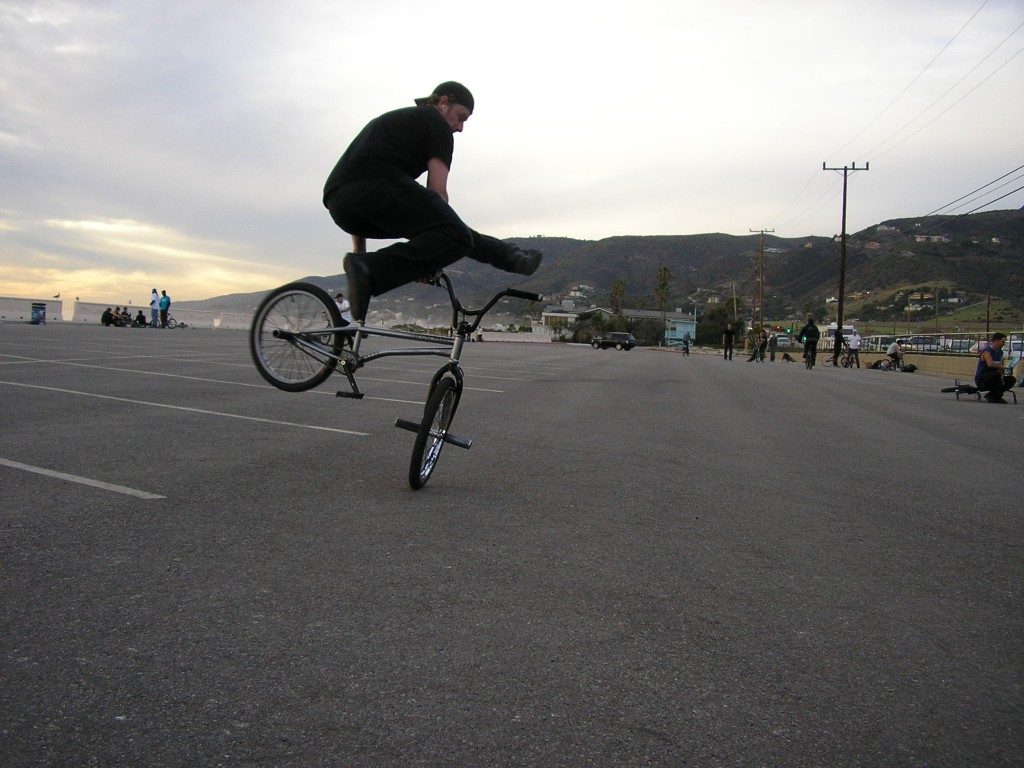 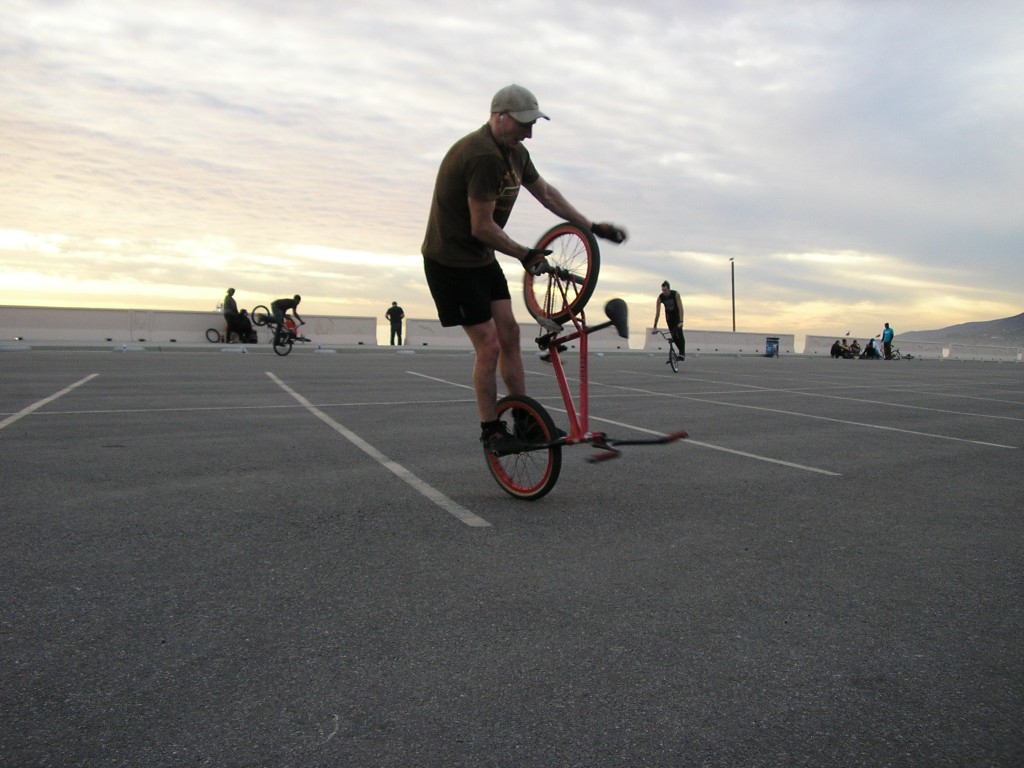 Cory Fester and Peakyp Msheffield made the trip down to So cal from Edmonton, Canada.

The 2nd annual One Love Jam went down Saturday, January 14th. The scene was a large parking lot at Zuma Beach in Malibu, California. About 75 riders came out for the jam. Crews from LA, Nor Cal, Texas, Canada, and a number other places were all ripping it up. One rider even drove from New York State, that’s hardcore!

The weather was rad, temperature was around 68 with no wind. The parking lot was clean, mostly flat, and large enough for both “jam circle,” or “solo style” session options. The Red Bull DJ Truck gave the gathering a nice soundtrack, with plenty of classic and new school mash-ups.

A number of riders entered the bunnyhop contest for a shot at the $300 prize. It was pretty amazing to watch so many flatland riders popping those short wheelbase bikes up! In the end, a shredder named Brock rode away with the cash. He cleared the bar at around 3.5 feet. 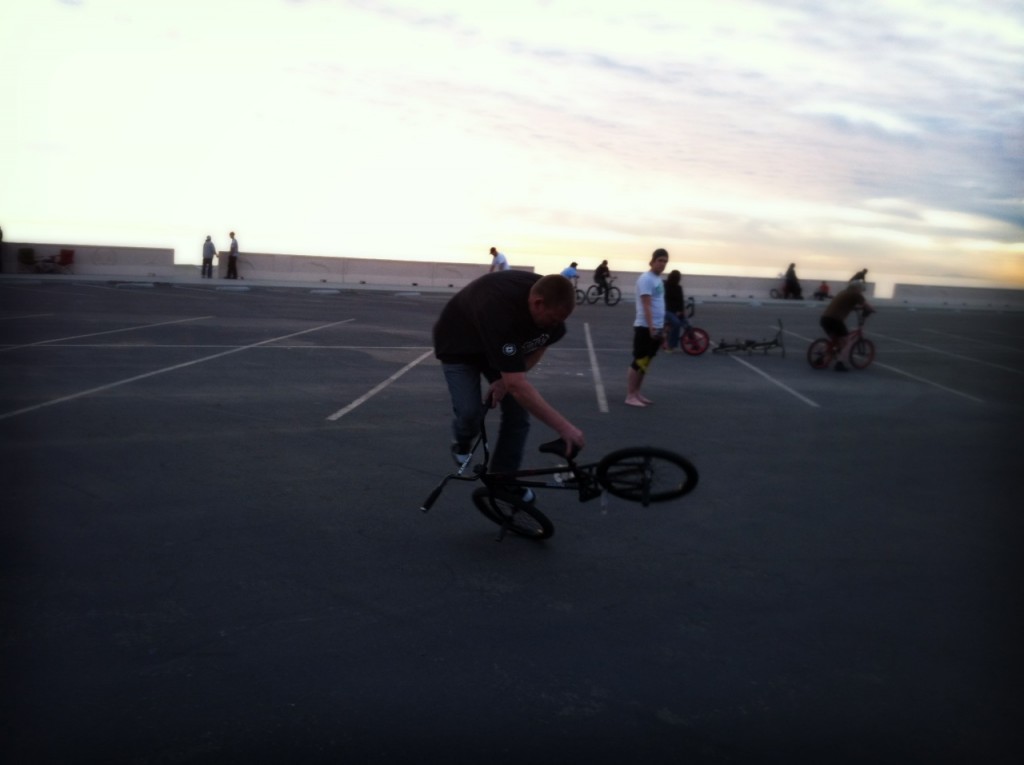 Nor cal resident, Mike Robbins tearing it up.

Rider diversity is always a cool thing at events like this. I saw one rider rolling around with one of the first Haro freestyle bike models, ever made. At the same time just across the parking lot, the flatland story continued to be told with riders like Dylan Worsley, Day Smith, Pete Brandt, Gabe Weed, Chad Johnston and others.

With so many great riders, there were a ton of tricks! Recent West Coast transplant Brian Tunney took advantage of the long parking lot, with some amazing rear wheel “Around The World” combinations. Stephen Hearn also pulled some crazy switch-footed forward and reverse rolling stuff. Aaron Frost really showed a lot of originality with his unique front wheel pivot switches. Canada’s own Percy Marshall brought his own brand of energy to the jam. He rolled Blenders and Death Trucks from the pedal as part of his arsenal. Percy must have adapted to the So Cal sunshine pretty quickly. He ended up going for a swim in the Pacific at dusk! 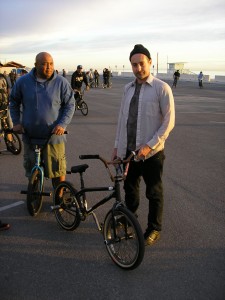 Brian Tunney just moved to the West Coast and described riding with the likes of Day Smith, Dylan Worsley and many more this past weekend at the One Love jam as “Surreal”, look for some coverage from Brian really soon on the ESPN site.

It was inspiring to see more than a dozen sponsors who stepped up to help. The One Love Jam organizers gave out free raffle tickets, and the winners rode away with goodie bags filled with so much good stuff!

Special thanks go out to Darin Wright and Shayne Khajehnoori and the rest of the One Love Crew, for all that goes into creating such a great event.

7 thoughts on “Repo: One Love jam”