The Offline Sports Games is Hungary’s biggest action sports festival. For those not in the know, Offline is the premiere magazine for action sports and urban culture in Hungary where they cover everything from BMX (and flatland of course!) to skateboarding, inline skating, music and so on.   Each year they hold a contest in Budapest for BMX, skateboarding and MTB with a much of top shelf music performers to cap it off. For the past few years they have been using the area behind the iconic Heroes Square in Budapest that doubles as a lake in summer (where you can even cable wakeboard!) and an ice skating arena in winter. 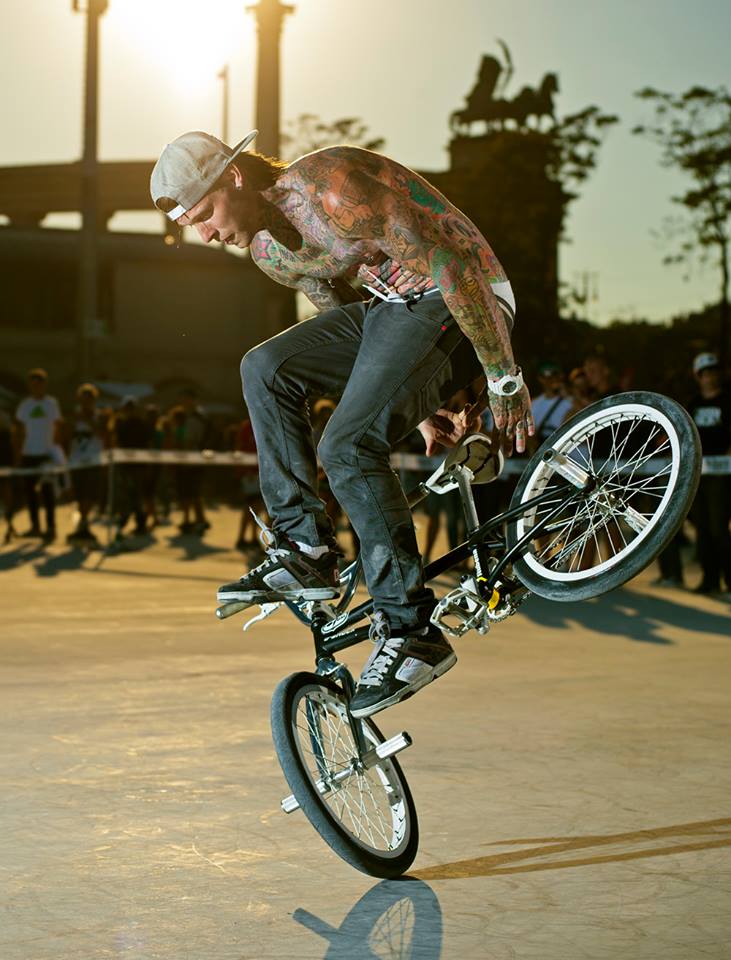 Dom, mid halfpacker switch on his way to first place in Budapest!

Qualifiers and finals were held on the Saturday so partying for most was “chilled” the night before. The spot was swept and cleaned as best it could be but with the dirt jumps not far away, there was always going to be challenge of riding with a dusty surface. The riding in the qualifiers was not at the usual high standard with a lot of riders struggling to complete their runs. Not so riders like Dominik and Matthias who’s riding was on point. Everyone knows how they ride, so no need to go into details.  The finals rolled around late in the afternoon as the sun started to dip behind the famous Heroes Square. The final 8 that went through from the qualifiers all meant business and most riders had flawless, or close to, runs. By this time of the day, the festival was rammed with people so the crowds watching were definitely in the spirit to watch some gnarly riding go down. There will be vids floating around on the inter webs somewhere along with results, so check those for the low down, but the bottom line here is that everyone put it all on the line and rode amazing.

Shout out goes to Laszlo Tivador who looked like he had the run of his life hitting all his hard and original combos. He was stoked. Dominik is maybe the most technical rider on the contest scene at the moment and the hard work he puts in showed itself with a flawless final run that earned him the top spot. Also from the Czech Republic, Martin Drazil killed the front and back wheel and showed how dialled his riding is at the moment. Matthias rode like Matthias always does and killed it on the front and back wheel. With some riders slowing down for the dusty surface, Matthias rode like it was his home spot and didn’t seemed bothered at all. Seppl worked through his unique nose wheelie / whiplash / half-packer combos and JF Boulienne dropped his signature front-yard runs.

Sebastian Grubinger and Alexis Desolneux brought a whole different style of technical riding to the contest with their endless whiplash variations and Sebastian’s backward facing manuals (he also pulled it cross-footed too).  Highlights for the weekend were definitely getting to hang out with everyone again including George Manos who stayed at our flat for the weekend. It was cool hearing about his approach to pegless flatland.  It’s always a good time at events like this. Catching up with friends and making new ones and creating some good memories for the future. Preparation is already underway for next year with a time clock and better floor preparation. Thanks to all the riders, Burn Energy Drink, Offline Sports Games and OG Bike Co for making it happen – see you all next year!