The 11th VoodooJam rolled through New Orleans, Louisiana USA, the last weekend in July.
Riders from eleven different countries braved the 108° (F) heat index to make this event one of the best ones yet!
The classic pre-jam went down at Annunciation Center Park, in New Orleans on Friday. This location was about a mile from the host hotel, so a ton of riders took advantage of it! I remember counting close to 100 people directly involved in the flatland scene, hanging out and riding. 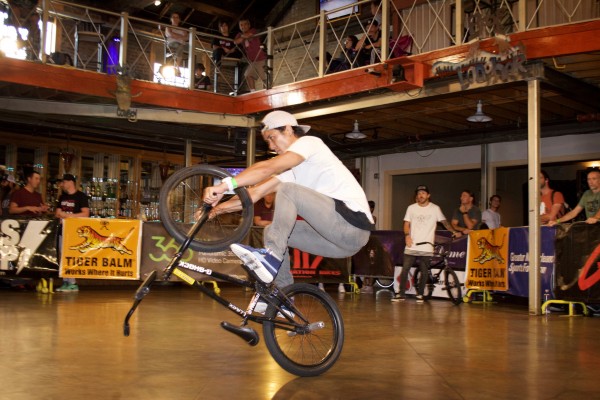 Ucchie made his first entry to the World Circuit this year at Voodoo Jam. Signature double foot pedal ice cream.

Two jam circles quickly emerged on both sides of the concrete basketball court. (sometimes a centre circle would also appear) So many great riders were killing this spot, it’s impossible to name them all, so here are only a few highlights. The Super Kids from Japan; 11 year-old Kira Komagata, and 13 year-old Yu Shoji seemed to ride all day long. These kids have so much passion for flatland, it’s contagious! Other jam standouts were Spain’s Varo Hernandez. He is such a creative rider and has great flow on both wheels. I particularly liked his switch-footed hook-spin variations. Peru’s William Perez was also a standout. He killed the back wheel with such ease and precision. Unfortunately, William was plagued with flats at the pre-jam, but seemed to get his wheel fixed for his Saturday runs. Montreal’s Jason Plourde was also a jam standout. I see a lot of progress in Jason’s back wheel flow. Jason credits recently switching to a 1.9 size rear tire, and his speed has increased! Amazing!

Novice class and Veteran class runs were also held at the pre-jam spot. It was a great vibe as everyone gathered around these riders to encourage and cheer.
Leslie Halls took the top honors in novice class. Followed closely by Roberto Reyes and Connor Wensel. Connor is an alumni of Alex Jumelin’s flatland school in New Orleans, so it was extra cool to see him back again this year! 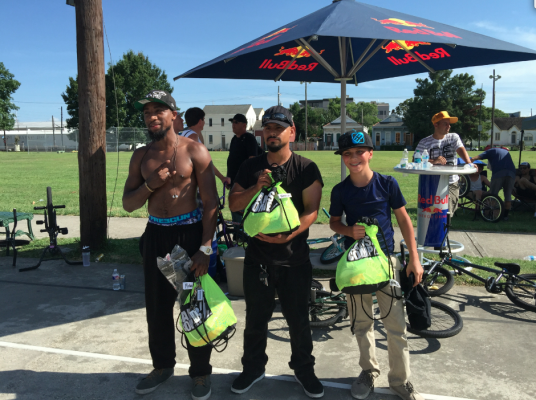 Texas was certainly representing in the Veteran class. Dallas rider Nikola Olic smoothly rolled to the win, followed by Marty La Mantequilla Ferryman. Marty incorporated his signature side-saddle peg ride which brought the crowd to its feet. San Antonio rider Bobby Burge mixed the old with new to take the third place podium position. I enjoyed his surfer and (scurfer) variations as well as the yabba-dabba-do! (seated two-footed backyard).
Texas legend Rodney Williams came to the jam a little later in the day, and when he hit one of the jam circles, everyone stopped to take notice. Fresh off the plane, Rodney broke into one of his legendary front wheel combos. 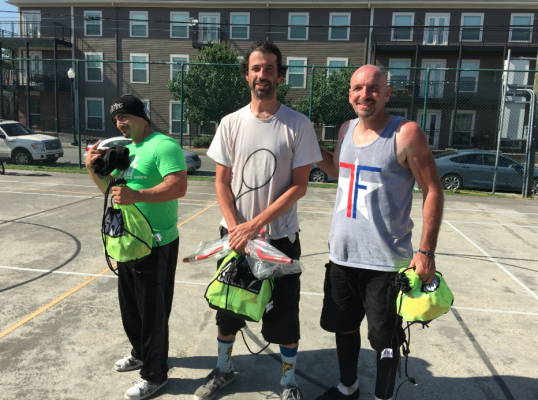 His combo was somewhere between 10 and 11 minutes long! It was such a rad way to bring to a close the voodoo pre-jam, and it certainly added anticipation for what we would see on Saturday! 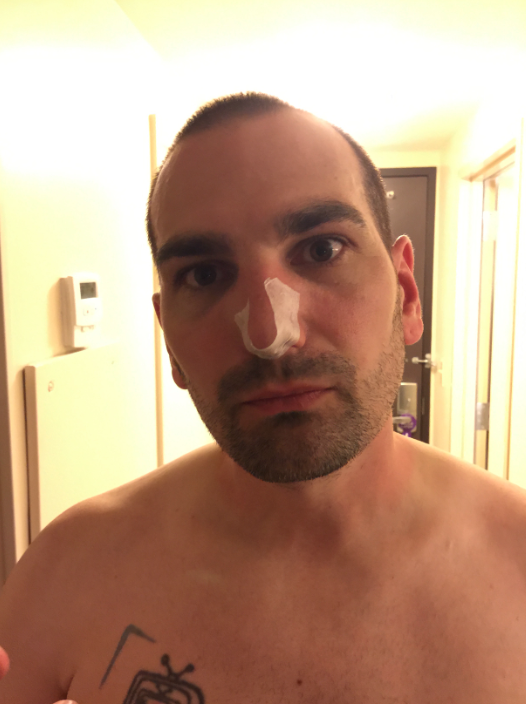 While in New Orleans we learned there was a boil advisory in effect. Apparently there was an amoeba in tap water that can crawl from your nose, to your brain, killing you in a matter of days. But, never fear… Joe Cicman saved the world, yet again.

Saturday began bright and early with the AM class. EZ Chris from Texas qualified in the top spot, with smooth pivots and nerves of steel. Super kids Yu Shoji and Kira Komagata, qualified
second and third, and I was struck by the remarkable crowd response. When these young riders took the floor, all eyes were focused on them. I wish I could translate the decibel level of the cheers after Yu pulled his double decade! So rad! After 15 minutes of practice, the clock began for AM finals. 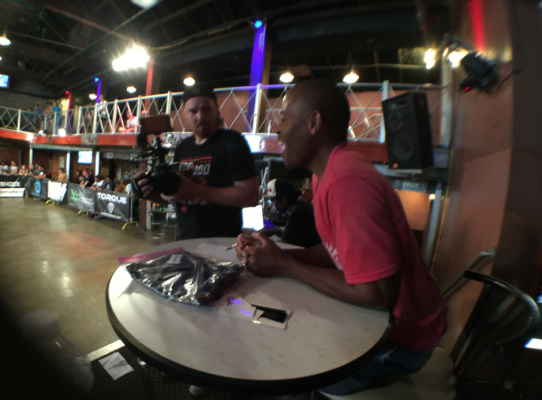 Rodney Williams getting caught in the moment, judging AM flatland.

Finals are often a time where riders can prove his or her ability. It’s always inspiring to see a rider move up, and nail their run while dealing with this added pressure. Japan’s Mai Nishikawa killed her finals run. In addition to being the only girl rider that competed at Voodoo Jam, she moved up from 5th to 2nd place! Congratulations Mai! Super Kid Kira took third, and Yu won the AM class! Congratulations to all the AM riders! 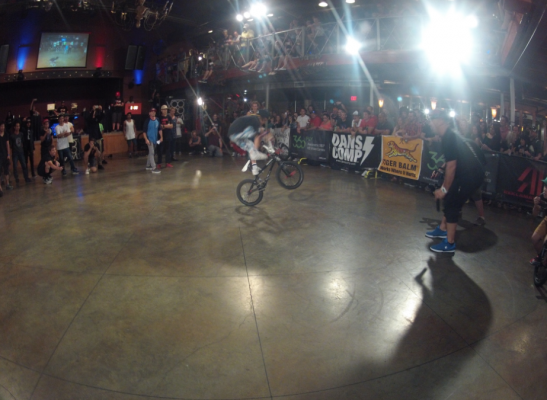 Next up were the 30 pros from all over the world. Seven heats of riders scoured to learn their run order. Noticeably absent was Quebec rider Jean William Provost (Dub). Dub arrived the night before, but his bike was lost by the airline. Dub had his fingers crossed that his bike would arrive in time, but unfortunately it did not. This was quite a blow to Dub, and really to all of us at the contest. It remains to be seen how this will effect his World Circuit ranking, but he didn’t seem to be too overwhelmed by it all. Dub still donned his classic smile, and turned his focus to shooting footage, and handing out lots of high-fives to friends.
After a few hours of pro qualifying, the dust began to settle. French rider Matthias Dandois qualified first with a flawless 3 minute run. Japan’s Ucchie qualified second after featuring his roll-back-manual-jump to switch-footed-rope! Naoto Tamaro held down the third place qualifying run with a smooth, snappy flow. One of my favorite runs of the day was pulled by Thailand’s Toon Pakphum. His backwards boomerang line to crack packer jump was perfectly executed! He qualified 4th. California’s Ahmed Johnson was another rider that brought the crowd to its feet. Ahmed has so many technical pivot and body varial moves, coupled with his “wild style” makes him incredibly exciting to watch. Ahmed didn’t make the finals this time, but he did receive the riders choice award. Ahmed is one to watch for the future! 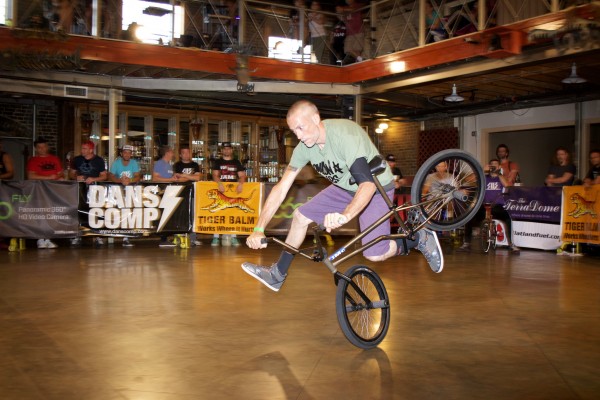 Will Redd, look at the balance point of this forward elbow glide kneeling on the pedal! Amazing!

Another crowd favorite was Texas flatlander Will Redd. Will has so many original lines. Neanderthal (forward elbow glide) while kneeling on the pedal, forward side glide-bar flip pivots, and the list continues. Will qualified in 8th place, and the crowd erupted when his name was confirmed as one of the twelve who would be riding in the finals later Saturday night.

The crowd outside the venue began to show up about an hour early. A light rain began to fall which didn’t seem to bother them in any way. Thirty minutes before the doors were to open, the ticket line was already reaching to the street.

The 12 qualifiers were introduced one at a time, and host Scott O’Brien got the crowd hyped like only he can. 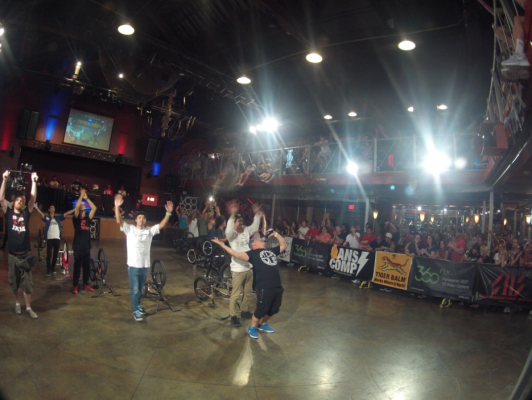 Pro finals began with the top 12 pro riders from earlier in the day; Tyler Gilliard, Hiroki Uchiyema, William Perez, Jason Plourde, Will Redd, Takahiro Ikeda, Dez Maarsen, Viki Gomez, Toon Pakphum, Naoto Tamaru, Yohei Uchino, and Matthias Dandois.
The crowd intensity never seemed to lull for any of these runs. I remember thinking it was going to be hard to keep up this intensity for the upcoming battles. Little did I know that things were going to be cranked to eleven. 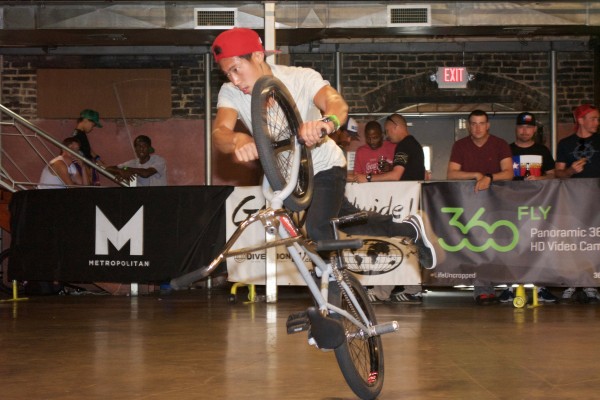 Naoto Tamaru, one of the crowd favourites during the whole Voodoo jam weekend.

Scott O’Brien took the floor as the judges were tallying their numbers. He wasted no time to unveil a pretty incredible surprise, saying “I’m going to tell you right now, your life is about to change.” The Super Kids from Japan (11 year-old Kira Komagata, and 13 year-old Yu Shoji) busted onto the floor and began rocking tricks together! The atmosphere was incredible. The crowd was totally going bananas! The Voodoo Jam is often compared to the “Super Bowl” of BMX flatland in the United States. I couldn’t help but parallel this to a Super Bowl half-time show! And after the super kids demo, things got even crazier. 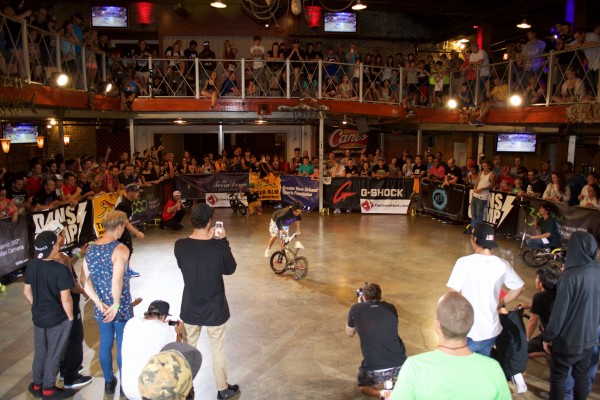 As the DJ spun Flo Rida’s “It’s going down for real,” Voodoo Jam co-organizer Terry Adams took the floor and busted a pedal time-machine. I thought he was going to do a demo too! Turns out, he had much bigger plans. Terry pulled his trick, grabbed the mic, and proceeded to give his bike away! The day before, he had noticed that Connor Wensel (3rd place Novice Class) needed a new ride. Armed with the vision to “Grow BMX” Terry decided Connor’s next ride would be a good one. I noticed a number of people tearing up when Connor accepted Terry’s bike, including both Connor and Terry. What a moment for flatland bmx! This is one that many of us will carry with us from now on!

The crowd frenzy continued right into the final battles, and it was so much fun!
When the dust settled, Matthias Dandios was crowned the 2015 Pro Flatland Voodoo Jam Champ! Japan rider Ucchie upside-down-bike-flipped to second place, and Dutch rider Dez Maarsen held down third place. Dez pulled some incredible links, and seemed to be very comfortable with the pressure of finals. Dez has a very bright future ahead.
Takahiro Ikeda spun his way to 4th place. It was great to see Takahiro on a break from his current flatland gig in Orlando. Spain’s Viki Gomez got 5th this time around followed very closely by Toon Pakphum of Thailand. Japan’s Naoto Tamaru took 7th and Canadian beast Jason Plourde took 8th. Peru’s William Perez pivoted his way to 9th place, and US rider Will Redd finished with 10th place. Hiroki Uchiyama took 11th place back home to Japan, and Tyler Gilliard from Florida rounded out the pro qualifiers for 12th place in the finals. 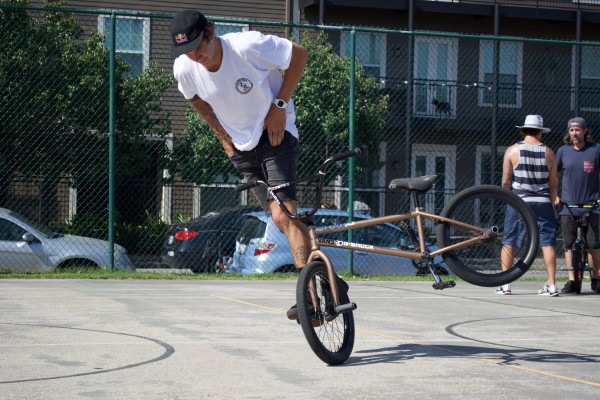 And just like that, Voodoo Jam 2015 was in the books. Scott O’Brien and Terry Adams (along with many friends and family) once again pulled off the impossible. They continue to breath new life into the world flatland BMX scene. I for one am very grateful, and can’t wait for Voodoo Jam 2016!

A special thanks to all of the sponsors: 360 fly, Dan’s Comp, Flatland Fuel, Deco, G-Shock, Tiber Balm, Torque, Reklamation Bikes, Raising Cane’s, Neue, the Byke Project, The Duke Academy, Purple Monkey, ATL Clothing Company, Monolithic, The Terradome.
Flatland BMX is alive and well in the United States and we thank you! Now let’s all go ride!