The process of putting an interview together is by far my favourite part of making this flatmatters blog, take this George Manos interview for example…

Like me, you were probably blown away by George Manos riding last week, when he dropped his latest video edit! But who is this guy? Wheres he from? Whats inspiring him? Is less more? I wanted to find out more about this guy, read on! 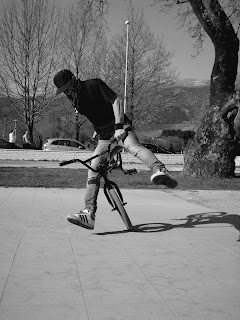 So George your video edit just blew up big time on the blog, how do you feel about that?
Well I am super-stoked too say the least!!!
I was expecting all kinds of reactions since my type of riding is different compared to the style and tricks that majority of riders have nowadays, but surprisingly I had good comments and from riders that I respect a lot!! That’s really encouraging because I am following a strange path in flatland. Thanks! And thanks to everyone who promoted it!

Tell me about yourself, you’re from Greece right? Whereabouts? How long riding and that kind of stuff?
I’m from ioannina, Greece. I moved to a lot of cities since birth and ended up here again it’s cool though! I’m 23 years old. I ride for close to 10 years this summer I ride flatland with a good friend Chris aka “the doctor” and some guys from Athens, the last 2 years I also ride some street with my friends in town(dimos respect)!

How’s the riding scene in Greece?
The riding scene in Greece is growing strong, progressing, hopefully. We are about 15-20 flatlanders with all kinds of styles and levels, there are also many street and ramp riders with really good level and new kids start to ride and killing it already which is good. The problem is that we don’t have any help from the Greek government to build ramps and stuff and it makes it more difficult for people to continue riding and progressing. Add to that the negative approach by the most people who think we are punks etc. you know the story… But in flatland things are a bit easier because you only need a flatground although I’ve been kicked out from spots just for riding flat. It’s insane, because our national sport is football and hanging’ at coffee shops all day long! So most of the time we are the aliens who appear here and there. And also the never-ending shittalking even if we’re a bunch of people, but I stopped caring long ago. 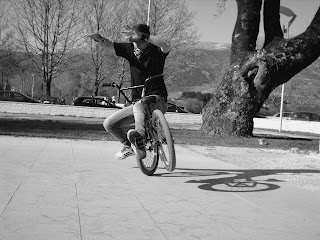 How long have you been riding peg less? What inspired you?
I’ve been riding peg less for about 2 years seriously. It first came to my mind in 2007 when I saw my first bmx in my Grandma’s house and the feeling of riding a simple bike came to memory. It was peg less and somehow I thought how would that be to ride that way, But it was a really crazy idea and didn’t gave it too much thought. After a while I saw some peg less street riders like; Steven Hamilton, Eddie Cleveland, Ian Schwartz and I was blown away, and remembered my idea of peg less and decided to give it a try. So for the following year my pegs went on and off all the time. It was an experiment and gave me the feeling when you first learn to ride, cause I must admit that I was starting to get bored with the whole steamroller, halfpacker spinning tricks. I took the final decision to remain peg less when I saw Chad Johnston’s video because I felt that it was possible and not another dream. That was a sign that I’m not alone and of course not crazy!

What do you do besides riding?
Besides riding I do a bit of drawing it’s my other creative outlet! I read books, music, movies etc. this year I graduated from university in the philosophy and linguist section. And now I’m actually serving my country in the army for 1 year. Thank god I still find some time to ride!!

With regard to peg less and brakeless riding, is less more?
Well regarding to peg less and brakeless, there are both good and bad things. The good things are that the whole feeling of the bike is really good with flow, simple, like a toy, no levers or sharp edges it feels solid and that reflects to the way you ride, because to me is more natural. It also makes you think new stuff instead of the common and trendy tricks. creation! On the other side to you can’t do all the tricks that took years to learn and you have to leave it back in order to create something new. It’s the prize you have to pay! To me yeah sometimes less is more if these little things you do can compare to more, I choose quality not quantity. To wrap it up I would say it’s a minimalistic approach. 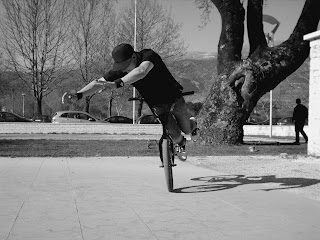 What inspires your riding in general?
Inspiration. That’s a good question! Well I get inspired by everything that reminds me the feeling of riding bmx and feels fresh and new, and that could be another sport or architecture, painting, dancing, martial arts. and the list goes on!

Your riding is very original! I really like how you build up tricks, is flatland riding an art for you?
Thanks! The first time I learnt about originality is when I read back in the day an interview from Martti Kuoppa talking about it and didn’t fully understood what he was talking about, afterwards I met a Greek rider, Manos Daskalakis, who made things clear to me, by being a living example. It’s my priority ever since. But I don’t think original is the best definition cause originality and its definition is subjective. Seriously I think it’s really hard to be original, especially these days where everybody is at a very high level, it’s hard to follow let alone try to compete! So to me trying to be different is another way to progress, it’s like instead of going new school or old school I choose to go sideways! I think life is full of compromises and to ride with compromises and following other riders’ standards as the only think you can do is depressing to me. Don’t get me wrong, I guess things are subjective and I’m not trying to judge no one, I’m not perfect or completely original, no one is because everyone is copying and talking ideas from each other’s riding, and I suppose that’s the key: to take things and make it your own, not copy somebody else’s and try to make clone. I guess it’s like taking every color of a rainbow and mixing it, in the end it’s white and pure, and also contains all the other at the same time! Or trying to mix metals to create gold! So to answer the question if flat to me is art, I would say that is alchemy!

Where do you see your peg less riding going from say where you’re at now and the last edit?
I would like to watch it growing of course! I have lots of crazy ideas trick positions and small hard combos. It will be some strange stuff in the future. All I need is time and effort, and a bit of luck of course! Thank god so far! 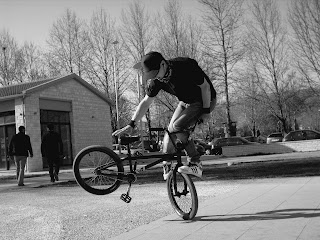 I remember you competing in master class at the masters a few years back, do you compete in many contests?
Nowadays not really. The masters was my first big contest, before that I had only participate in small contests and jams in Greece, nothing special compared to the Worlds. I was in awe!!!!I also not consider my self a contest rider or competitive with that sense, especially with these new battle formats, not my cup of tea, cause I’m not dialed-consistent at all and the level of other riders is also sky high to battle against! I enjoy the whole vibe but I prefer a simple session by myself or with 2-3 other riders.

Thanks George, great interview! Any final thanks?
Thanks to god, parents, all my riding buddies, you know who you are, you Effraim for this interview. And some words to all the flatlanders, simply keep riding!