This is one of my favourite articles of the year and also yours the subscribers to the blog, and ironically one of the first to launch the blog. This first article was about a month in preparation. Some great diverse answers.

Flatland always goes in cycles of progression, it’s the nature of the wheel. Some riders these day are not touching the tyre at all when they ride, and using their body and bike as momentum, on the flip side contest veterans still use the tyre as a matter of stability and speed, the common trick being the halfpacker scuff (aka the circle k).

I wondered is this technique of touching the tyre now considered a mistake at the highest level? Are you taking a break mid link and thus lessening the degree of difficulty? Is this a level everyone should strive for? Or is it just a personal thing?
I interviewed a broad range of pro riders and this is what they had to say. 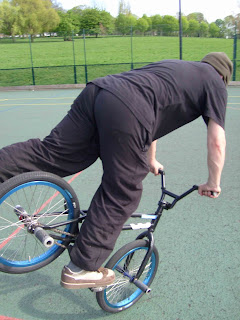 Within your own riding, how do you view scuffing the tyre mid link?

Terry Adams: With my riding I just pretty much do whatever is fun. Sometimes I like the way a trick looks to have one power scuff instead of jerking my body to pump for speed. I just do what I think looks best most of the time.

Sam Foakes:I don’t scuff mid link at all, I would sooner fall off and often do, haha.

Jay Forde:I dont have a problem with it, I love all styles of riding, just don’t put your foot down, that’s the main point.< James White:A long time ago I remember Lee Musselwhite learning that backwards spinning halfpacker thing. Nine times out of ten, he could get into it and spin it, but just couldnt get out of it. I tried to get him to put his foot on the tyre at the end to slow it down, and pop out of it, Lee point blank refused, I just didnt get it! It took him a lot of hard work and determination to get that trick done. I totally respect him for that, and boy was it worth it! Way ahead of it’s time! I’ve always tried to flow and be smooth, maybe not with the same foresight and determination as Lee (I had a life outside of riding!). But I don’t think I’ve touched the tyre for many years. I would rather step off, than touch the tyre!! But this is a personal thing very similar to the personal choice of brakes or no brakes. I love the look of modern flatland, no brakes, pumping, spinning and flowing. However, I’m going to state that scuffing shouldnt be done. I had a lot of fun scuffing back in the day and as cringy as may sound that what its all about. Freestylin and doing what you enjoy.

Matthias Dandois:Useless! But i guess sometimes one big scuff is better than two minutes pumping a halfpacker for example.

Justin Miller:Scuffing is part of my riding. I think its part of my style. I like to get speed out of certain tricks and I think a few quick scuffs looks good.

Chad Johnston:It’s a way to stand on my wheel. I view myself as scuffing friendly. It’s cool, as long as it’s occasional and not excessive.

Cory Fester:For me personally I like to go switch to switch with as little time between them as possible. I like the idea of creating enough momentum from the switch itself in order to get to the next trick without having to scuff or pump. 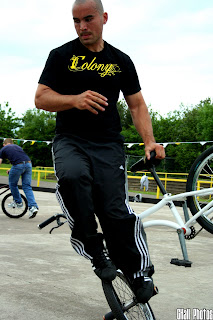 Terry Adams:Do I think scuffing the tyre is like touching the ground? (editors note I didnt ask that Terry). Nope. If a rider does an entire combo without scuffing I will recognise it and give them props. But I still enjoy watching people ride that hit their tyre to get speed before the next link. If the tricks are hard, I think the judges shouldnt worry too much about this, no scuffing only pumping so called future of flatland.

Sam Foakes:It is definitely stabilizing the trick. If you do a switch into a rolling trick then put your foot on the tyre, you are immediately making it easier because you can control the speed and counter act a mistake which may have been made. I think from a judging perspective, when close decisions need to be made, this has to be taken into consideration.

James White:You can’t ask this question without pointing the finger at Justin Miller. He does the most perfect links, dropping original bombs all over the place, then kicks the tyre for no reason, its like taking a big suck on your mothers breast for comfort. I hate it. But then, it works for him to keep it together in a comp. We all know how hard it can be to pull one of your simple links in a contest, let alone what he does time and time again. I could only dream of being as dialled as he is. But to answer the question I would consider a scuff on the tyre the same as dab (touch) on the floor in this circumstance.

Keelan Philips:Obviously if you scuff to stabilize a trick it’s not as difficult as without! But contests are a wierd thing, it’s the same as riding at your normal spot, I think a lot of riders will throw a scuff in to stabilize at a comp, because they might be a bit off riding if they are nervous, I think if you throw a scuff in to help your riding then cool, but if you did it without then even better.

Matthias Dandois:Lessening the degree of difficulty of course! I mean, when you are unstable, its so easy to scuff, and really hard to keep both feet on the pegs without touching the tyre. And its much more stylish not to scuff. Check raphael’s stubble duck, its like 1000000 more stylish than scuffing stubble duck, and much more harder.

Justin Miller:This is a hard question to answer, because there are so many riders out there with different styles and not one is better than the other. It may take away from the difficulty a bit, but its hard to say because I usually give the tyre a kick for speed, not to stabilize myself. Then again, if i have a choice between falling and scuffing the tyre a few times I’ll take scuffing. There is no difference though if someone pumps a trick and rolls it a long way to stabilize themselves.

Chad Johnston:I think its adding another technique to a position. It could be scuffing, squeaking or gliding. It could behopping or stalling also. The bike is in the same pose, just motored/balanced differently. I dont believe it lessens the degree of difficulty, it actually adds variety.

Cory Fester:Definitely it lessons the degree of difficulty of the switch, so does having to pump a trick around three circles as well. Going from switch to switch without having either of those things means the switches have to be dialled. I think its a lot harder to dial in the timing of each jump or flip than dialling how to scuff or pump.