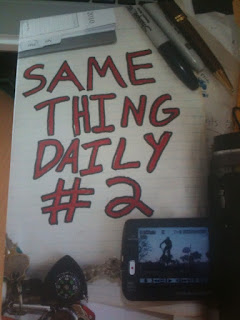 I feel like I should give this DVD a big intro, it might not be what you think though…I asked Dane if I could get a copy of Same thing daily 2 after I saw it advertised on his blog, I’m sure your aware you can buy a t-shirt as well along with the offer ($32). Dane offered me a copy if I review the DVD but I had to pay for t-shirt…. I had a change of heart, a free copy doesn’t help at all, I thought to myself, “I’m part of the problem here”, so I paid for it and I’ll review it…

These DVDs help flatland grow in the motivational and progressive sense, and if we want these projects to continue we should support these people, whether it’s Dane, Intrikat, Simon O’Brien, Martti or whoever, let’s not let the flatland DVD die of a sad death. Whilst I’m shooting myself in the foot for a free copy, I’m looking at the bigger picture here! Flats small enough as it is…

The rider list for Same thing daily 2, is a varied one, contrasting styles, out of limelight riders (Markus Redlberger, Brian Tunney, Sebastian Grubinger), and you have the contrast of more well known contest featuring riders (Shintaro Misawa, Chad Johnston, and Dane Beardsley of course), add Jody Temple and Akira Okamura which helps make for an interesting mix.

Jody Temple gets the opening section, riding to a feel good tune, The Avalanches “Since I left you”, sets a good tone for the DVD. The only time I ever see Jody (with exception of recent his jomopro appearance) is on Dane’s DVDs, so it’s always a real treat to watch Jody’s smooth style. Standouts for me on Jody’s section were the opening line, xft halfpacker pivot to backwards hitch, rolled super long, and buttery as you’d expect from Jody! Jody has a lot of intricate lil switches in between the bike throwing, one of my favourites was Pedal hang 5 step thru whip to halfpacker 360 pivot out. The ender right hand halfpacker jump over frame to hitchhiker is sweet! Most importantly looks like Jody enjoyed making this section!

The next section falls to Shintaro Misawa, filmed in some great locations, Shintaro is finally getting the props his riding deserves, it’s easy to overlook what he’s doing as he moves effortlessly between complex front wheel switches, a lot of this section is based around the halfpacker position, and with a contest rider, its hard not to know his riding, the standout combo for me was the turbine whip to right foot mccircle to left arm halfpacker 360 pivot to spinning halfhiker to no handed messiah step over no hands on bar to two foot steam spinning halfhiker out, all laced to The cardigans, super nice section.

Brian Tunney gets the next section, the opening text as his section made me chuckle, “sorry if this sucks”. As always with Brian, ultra smooth, mad skills, long ass one handed hitchhiker jugglers as opening line. Mixed in with street footage, gives you a feel for what Brian’s riding is all about, you might say refreshing. There’s a bunch of one handed jugglers lines, as well as a long backwards hitch juggler line, my personal favourite was the super long backwards xft pedal five flip to tomahawk backwards crackpacker line with a super nice backdrop, I’m going to guess it’s a Manhattan skyline, but could be wrong, whatever, it def adds to the clip and section… 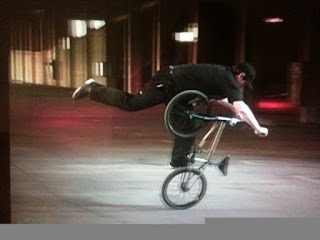 The next section, Chad Johnston kills it at his home spot the Long beach underground, defintely putting in some work, the pornos for pyros track fits well with Chad’s mix of street style and powerful style. First time I watched this DVD, it was Chad’s section that had me hitting the rewind, whether its a whopper linked straight into backwards pedal straddle walkover out, or my personal fav, the g turn backwards pedal five scuff forwards pedal five in circles ET the cranks opposite foot scarlo squeaks ET cranks back to pedal five turbines, this is crazy!!! And so smooth!!! Pegless of course!! Hit the rewind, hit the rewind, yes Chad!!! (editors note:ET refers to switching cranks around..)

The next section falls to an underrated Sebastian Grubinger, this guys riding is awesome, really well thought out combos I thought. And nice to see this DVD part give him the platform to showcase his skills, the opening whiplash to double around bars whiplash is beautiful! Sebastian has mad skills, backwards around bar whiplashes, multiple one handed whiplashes forwards and backwards, and my personal favourite multiple halfhiker right foot mcicrcle walkaround to crackpacker, so nice!! Great section!!

The next section goes to Akira Okamura, this section is a mix of flat and street, lot of lines, unedited feel, it’s raw! Akira rides up stairs, half cab down, Akira’s always been one to do his own thing and looks like he’s having great time, it’s ironic he rides street and flat on that frame, it looks like it will collapse! No offence Akira! Flat wise there’s mega spin to perverted to peg wheelie perverted out, whopper to back pegs landing whopper out, his riding is really edgy.

The next section is dedicated to Georgia, laced to a nice Roots track.. Nice clips of John Dowker, Aaron Behnke, Alexis DeGrassa, Shane from Neon Media (amongst others) busting, mixed in with street and trails clips, my favourite here is the clips of Andrew, this guy is awesome, double foot brakeless squeakers step over to double foot backwards kruzer, insane!! Liked that a lot! Looks like amazing scene in Georgia!

Dane Beardsley follows next, and never disappoints, I love this guys riding, his section falls into two parts, first part is a mix of skatepark, and street . His street style is a lot more raw than technical, I guess he leaves that for the flat. 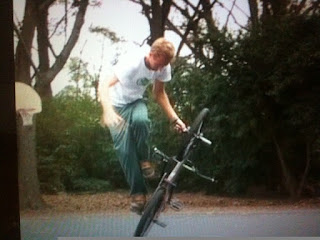 All that’s left is the credits! As I said in the intro, I think it’s important the flatland scene supports DVDs such as this, independent style, check Danes blog: http://samethingdaily.blogspot.com for ordering details. Amazing diversity in this dvd!!! Top marks!!! (if there is such a thing, feel good factor watching this…)Long live the flatland DVD…