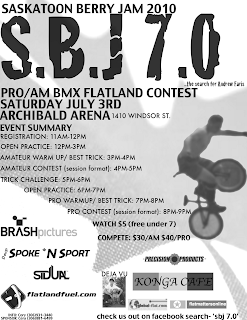 Cory Strat just sent me a lil run down of his event we featured a while back, video + full report..

The contest was held as planned at Archibald Arena on Saturday and had a total of twenty entries. We ran three hours of open practice and then began the amateur portion. The amateurs then had one hour designated to best trick and then another hour to compete for the top three rankings. The best trick contest was won by Rob Shaw of Edmonton with a very smooth back wheel combo that lasted close to a minute. The top three finishers in the contest were Eric Alvin (Vancouver), Rob Shaw (Edmonton), and Billy Gordon (Vancouver).

Pro best trick was awarded to Kevin Desautels from Winnipeg for a front wheel combo that contained many difficult switches and lasted well over a minute. The pro contest was also won by Kevin Desautels followed by Edmonton icons Percy Marshall IV and Cory Fester in 2nd and 3rd respectively.

We then dispersed from the arena and gathered at the Konga Cafe for some much needed food and the awards ceremony. As always the food and service was excellent and the riders really seemed to enjoy my favorite restaurant in town, enough to stay until 3:30am.

Now that I have had some much needed rest I am so glad to have done this contest. It was a great boost in the spirits of those who attended and a hell of a lot of fun- but I wouldn’t have been able to do it myself.

So without further adieu, I would like to extend a very huge thank you for your part in our event. We are planning to do the same next year- but this time bigger and better.

In the meantime I have contest reports to write and a video of this contest to edit. (which should be completed in the next month)