After watching Deju Vu, I thought it would be interesting to follow up my review, with a mini interview to see how Simon was feeling about the project, read on!

How long filming in total for Deju vu?
About 3-4 yrs,but in this time. I have been busy with alot of other stuff also.

The production and quality seemed to go up a notch on Deju Vu, was that a conscious decision from you to push the quality standards higher?
Yeah it was,professional dvds look way better,due to filming and shots and editing,so I tried my best with all of it and had my friend Mason Rose do the intro.Just trying to make flat look good you know,trying to do my part.Also, just like flatland,its good to look at other stuff as well as wanting to progress.

I always wondered what drives people, What’s your motivation behind a solo dvd, it’s certainly not money right? And did that motivation change after “Made you Look”?
Well ‘Made you look’ was about showing my real riding that people hadn’t seen,I got alot of good feed back and people said it was motivating….feels great to be able to motivate someone!I enjoyed doing the dvd, so I thought it would be a great challenge to try and better myself with a new dvd and hopefully motivate people again!

What’s the pressure like filming for a solo dvd, I’d imagine you felt an air of expectation after “Made you Look”?
Yeah absolutely,I knew I had to really try hard and do new stuff, I find its harder as you get older! It seems other things happen as we get older and dont ride as much,so it was bit of a mission to do sometimes, but good fun. 🙂

What was the hardest trick for you to capture on film?
The backwards 360 kickflip halfpacker,hardest thing i’ve ever done. 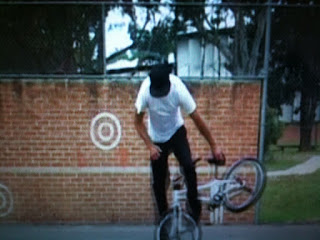 Are you happy with the end result?
Yeah i am,it has alot of cool stuff in there that i’m proud of and wanted to share with people.For sure things could have been better but,i tried ya at the end of the day if it motivates a few people i’m stoked! Plus i will have something in the future to look back on 🙂

If you could watch a solo dvd by any other rider who would it be?
Corey Bohan,or Martti and i’ve done that, so its cool.

Where can riders get Deju Vu from?
Flatfuel,newcircle,kunstform,and a few other places.

You’ve done the video project thing for a few years now, any desire or hunger to get back in the contest scene?
I would love to do the contest thing, purely to see old friends and travel again.The pressure to prove myself isn’t there as much or no amazing money in comps, so it would be great to catch up and travel.

Any final thanks you’d like to give for the dvd?
All my friends that helped,Colony,Etnies,,,,,Mason Rose,,,,,and Effraim for the interview. Thanks!