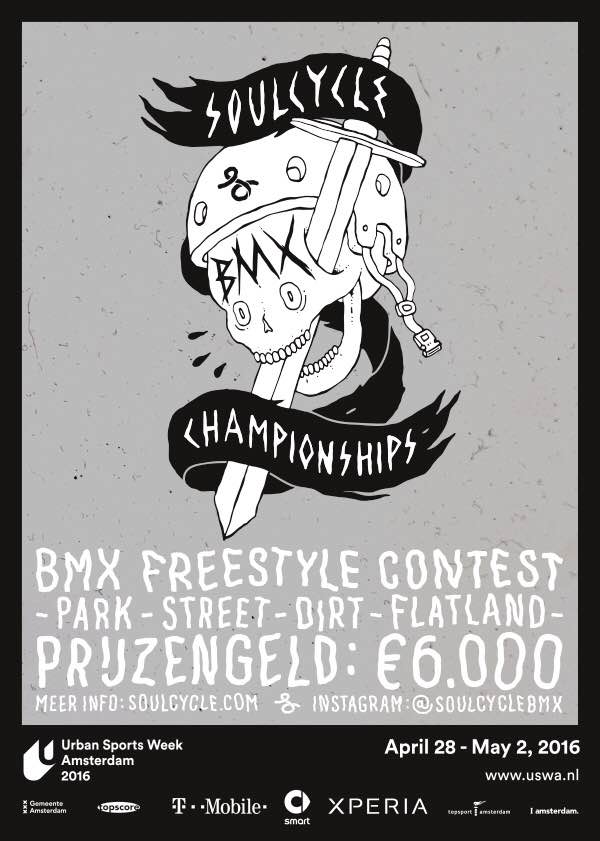 “From the 29th of April till the first of May Amsterdam is the place to be in the Netherlands for everybody who loves BMX. During this weekend Soulcycle BMX shop is the host of the one and only ‘Soulcycle BMX Championships’. On some of the most famous Amsterdam hotspots BMX dirt, street, park and flatland action will take place.
“Amsterdam got loads of BMXers and some great BMX history was made over here. It’s time to write some history again” Says Koen de Groot, owner of Soulcycle BMX shop and organizer of the ‘Soulcycle BMX Championships‘.
The kick-off of the Championships is on Friday the 29th of April with a big flatland contest at the Westergas area. Years ago Soulcycle organized the Flatground BMX series at this venue. Which made this a memorable place for the international flatland scene worldwide. The contest starts at 14h.
For the parkriders there is a big contest on the Friday! Only a few blocks away from the Westergas area, at the Marnixbowl. Extended with some fresh new obstacles park riders can show their best moves and transfers.
When the hangover is gone it’s time for some dirt on Saturday. At the city beach from club ‘Roest’ the riders can chill and ride as much dirt as they want. Good vibes compared to the well knows Rock ‘n Roll beach jam, Roest is also the place where the crowd and the riders can party until the sun comes up.
And when that sun is up, it’s called Sunday. The last day of the ‘Soulcycle BMX Championships’ all riders get together at the Museumplein for the street contest. On an unique course all the riders can show their best street skills.
There is over €6.000 of prizemoney. So make sure you register as soon as possible by sending an email to info@soulcycle.com. For more info check www.soulcycle.com. The contest is free to participate and free for spectators.
The ‘Soulcycle BMX Championships’ are part of the Urban Sports Week Amsterdam. During this week Amsterdam got loads of demo’s, contests and workshops in different disciplines.”