Yesterday I saw a photo of Terry’s new finger bike on facebook (photo below), I was quite blown away by this, look at the bigger picture for the future of flatland, how many kids will be stoked to this, and get exposed to flatland, I sent Terry a few questions about it to find out a lil’ more… 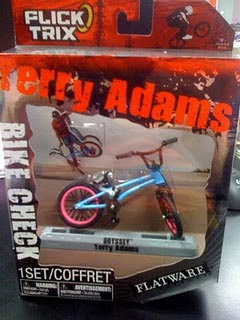 Firstly congrats on the finger bike, i didn’t see this coming!, pretty big for a flatlander to get this, you must be stoked, not to mention your bank balance is going to be loving it?
Thanks homie! Having a toy that is sold in stores around the world is honestly something that I have always dreamed about since I was a child. As far as my bank account goes, I wanted that toy so bad I would have “paid them” to make that thing! haha

How did you go about getting this deal?
I saw Dave Mirra on a TV commercial advertising his signature finger bike.. I thought “wow” that would be awesome to get flatland, myself in the mainstream like that. It really helped having great sponsors, friends that shoot amazing photos to make the dream a reality. The rest is history!

The blue bike pink wheels is kinda recognised as your colourway now, do you have to keep that going now, this fingerbike is being released?
The finger bike will be in the major stores sometime in October.. Although I do love that color scheme, I plan to be on some new colors by then.

2 thoughts on “Terry Adams gets a finger bike!”