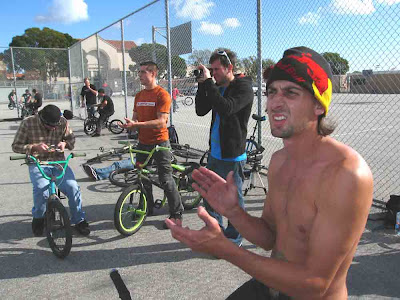 What was your motivation behind Dreams?

I wanted to produce a movie that explained how I got to where I am today. I get tons of people asking how I make a living off flatland. I wanted to let everyone know if you have a goal all it takes is to go after it! If you are reaching for the stars you are at least going to reach the moon. I wanted to showcase my best riding as well, but the main focus was to give people motivation in life and show them anything is possible.
Did you achieve everything you set out for originally?
Yes I did. I had the entire movie structured out on paper before we started filming. I handed that paper to Mickey in the very beginning and we stuck by it the entire film. It is exactly what I wanted so I owe tons of thanks to Mickey for that!
Did any of your sponsors back you with the cost of producing the DVD?
Red Bull helped with flying Mickey and myself to a couple of locations and that was a huge help. Lotek also helped with some finances towards the film. Global-flat was a huge help in promoting the DVD so they were basically a sponsor too. Odyssey has helped with the distribution so a huge thanks goes to them.
What kind of difficulities making “Dreams” did you face along the way?
The biggest difficulty for me was trying to find enough tricks to fill up three riding sections. I am not Martti Kuoppa so my tricklist is not endless. I wanted to not repeat any tricks and I feel like I accomplished that goal. But I must say it was hard for us to film some of those combos. Mickey always did a great job with keeping me motivated and saying “come on man” you got this!
This was the first flatland film in quite some time to have a message, do you hope another riders will be inspired by that and follow a similar path?
I hope they can watch my DVD and get motivated to do something. Even though my story was about flatland. I wanted to structure the film to let riders know that they can do anything they want in life. Being a pro rider, a doctor, a astronaut, or whatever they wanted.
Mickey Gaidos did a great job with the DVD. What kind of background does he have in film making?
I think this question is better answered by Mickey. Mickey followed his dream and works on movie sets and big budget films in New Orleans. He has pretty much taught his self and is now earning respect in the film industry in the area.
A lot of riders are finding it really tough to even maintain product flow sponsors at this present time, how are you finding the recession? Has it affected you, if so, how?
To be honest it has not really affected me at all. I have been very lucky with my sponsors and their support.
Many riders dream of having their own riding spot, you have a kick ass riding spot in your backyard, tell me about it, how did that come about?
I always said the day I purchased a house I would pave the backyard for a riding spot. It was just another dream that I wanted to happen. I cant even believe it when I look out the window.
I noticed that you didnt use to many shots from your backyard riding spot, why did you choose not to, and also why did you not discuss the fact you have your own riding spot? Thats a dream in itself for many riders?
For the first two riding sections we wanted to show as many locations as possible to keep the film looking fresh. We even made sure I was wearing different clothing that meshed well with every background. We felt showing my backyard more than once might bore a viewer that was not a rider. Another goal of my DVD was to market it towards non riders so that all people could enjoy it. I didnt talk about my riding spot because when I wrote the commentary I was not at my new house. I personally thought it was a little off subject to the point I was trying to get across. But after hearing your thoughts.Maybe I could have mentioned it.
Is there a clip or trick in the DVD that you are most stoked on?
The 360 backpacker jump back to backpacker.
And finally I have to ask, what is the deal with the cover?
I could sit here and make up a crazy story, but the truth is…. That is exactly what I wanted it to look like. I did not want it to be a riding shot, because the majority of the film is talking about following my dreams. Yes its true. I took off my shirt, oiled my chest, looked at the stars and shot the photo. I am happy with it.

2 thoughts on “Terry Adams interviewed about his Dreams DVD…”