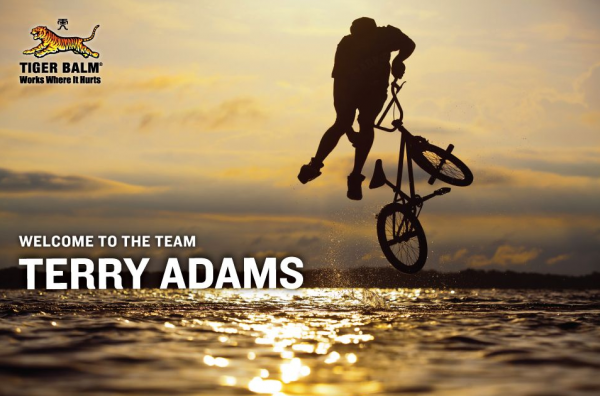 Ever had a bad back whilst riding, muscle ache, and used Tiger Balm to get the session done? Well Terry Adams has gone one further, read the official press release below! Congratulations on the hook up Terry!

Mr. Adams has been competing professionally in flatland BMX rider contests since he was 16 years old, and has become one of the sport’s most recognizable names. He has won dozens of championships during his 15-year career, including a gold medal from the X Games, and is a two-time winner of the sport’s most prestigious honor — Ride BMX Magazine’s “Number One Rider” Award (NORA).
Trusted by millions around the globe for nearly 100 years, Tiger Balm is the go-to topical pain relief solution for professional and amateur athletes alike. The product’s brand image is bold and strong, making it an ideal fit for extreme sports athletes such as Mr. Adams who take their bodies to the limit with daring and bold high-impact stunts that can cause sore muscles, strains, and sprains.
“I’m excited about the partnership with Tiger Balm because it’s a product I use and believe in,” said Mr. Adams. “BMX riders train very hard and sometimes we forget to take care of our bodies. It’s awesome to represent a brand that focuses on relieving muscle soreness and other aches and pains so I can ride hard every day.”
In the U.S., Tiger Balm has been endorsed by professional Football and Tennis stars, and is pleased to add Mr. Adams to that select group. He will promote the brand on his social media channels, including Facebook (www.facebook.com/terryadamsflatland), Twitter (www.twitter.com/terryadamsbmx), and Instagram (www.instagram.com/terryadamsbmx).
“We were excited to learn that Terry Adams is a big Tiger Balm fan,” said Kenneth Yeung, Founder and President of Prince of Peace Enterprises, Inc., the sole licensed United States distributor for all Tiger Balm products. “The skills he has on a bike are amazing and he understands how to promote a product. We are confident that he will be a fabulous brand ambassador and enthusiast for Tiger Balm.”

5 thoughts on “Terry Adams signs up with Tiger Balm!”