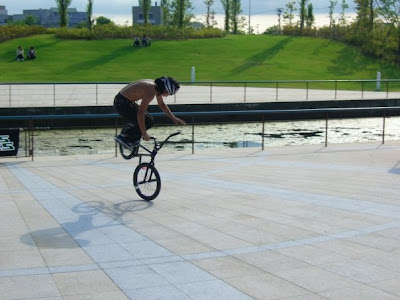 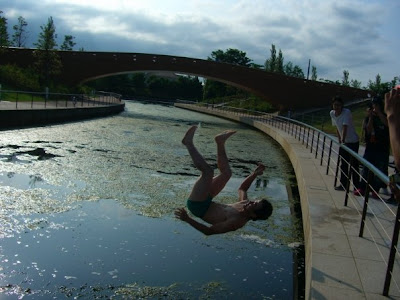 Angchang getting crazy in the polluted river after the contest, only in Japan!!! 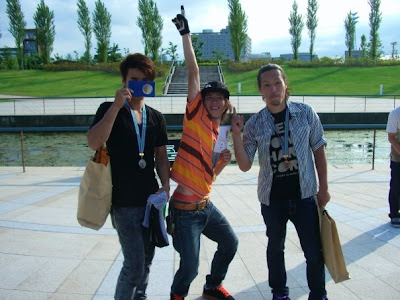 Four riders from the east took a trip to Hokuriku area for An-cup flatland contest.
An-cup took place in Toyama on 7th of june.
Me and Moto Sasaki and Takahiro Ikeda, Takashi Ishida decided to stop Komatsu to ride and hang out with York Uno and Komatsu riders.
We really had good time there. York and Shingo, Yuta and Yuya took us to beach and a great seafood restaurant by the beach after riding session.
We talked a lot about flatland with beer and tasty food! Thanks to Komatsu crew for great host!
Komatsu has one of the best flatland scene in Japan and Next KING OF GROUND is held in Komatsu, Ishikawa.
Komatsu riders are working hard for organizing and promoting KOG in Komatsu, I was there last year that was the best flatland event I’ve ever been to.
So dont miss it!
They wont disappoint you! I guarantee. 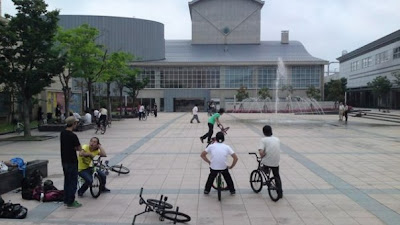 Sunday morning we headed to Toyama for An-cup.
This contest was oganized by Angchang(a rider from toyama) to help flatland grow in Hokuriku area.
The comp started with Angchang decade instead of a pledge of fair play on behalf of all the riders in beautiful park by dirty river in Toyama city.
There were three classes at the comp, about 50 riders showed up. 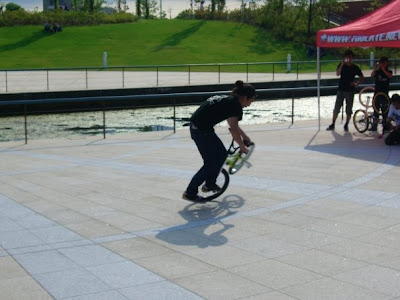 The floor was slanted so most of riders struggled with it, even York and Ucchie were having hard time to pull thier tricks.
But Takahiro Ikeda did perfect run with his crazy fast spining tricks at high class final!
Ike swept to win the comp for his first time with prize money!
After the call of his first victory we threw him into the polluted river! and Angchang after him!
Congratulation Ike!

Here is the result of high class final…

Report plus photos by Takugi Kasahara.