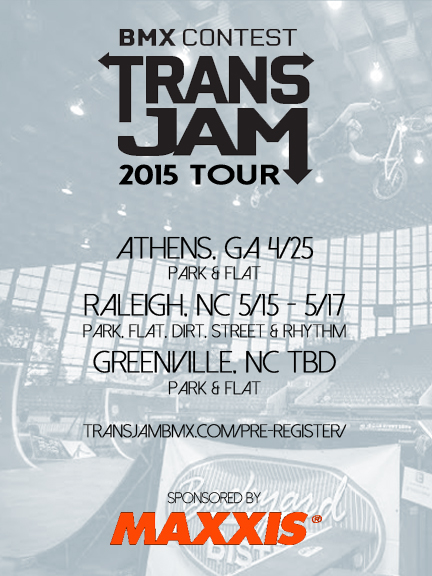 February 18, 2015 (Durham, NC) –The 2015 Trans Jam BMX Contest Series, owned and operated by the Atlantic Bike Stunt Alliance, will celebrate its sixth year of providing a platform of competition for amateur and professional freestyle BMX athletes. Onlookers at the events will experience many of the same stunts performed at largely televised competitions similar to those seen at the X Games. The series will kickoff in Athens, GA on Saturday, April 25 at the widely attended Athens Orthopedic Clinic Twilight in downtown. The first stop of the tour will feature Park and Flatland freestyle BMX competitions and welcomes competitors of all skill levels, culminating with the Pro classes as they perform gravity-defying stunts similar to those seen at the Dew Action Sports Tour and X Games.

Following the Athens stop, the series will continue on to Raleigh, NC for a multi-day event, beginning on Friday, May 15 through Sunday, May 17. The Raleigh stop will again host the tour’s only dirt BMX competition series on the first day of this event on Friday, May 15. The following two-days of this event will be held inside of the Dorton Arena at one of the largest festivals in the state, the Got to Be NC Festival, and feature Park, Flatland and Street competitions, in addition to a Jump Contest on Sunday. The flatland competition has partner with the AM FLAT CIRCUIT for the second consecutive year and will welcome top riders from across the nation. The Dorton Arena activities will also include vendors and additional entertainment, including a Vintage Bike Display.

The 2015 Trans Jam BMX Contest Series concludes in Greenville, NC at the Fifth Annual BMX Fest in the fall (date to be announced at a later time). The contest will include park and flatland competitions, for BMX riders of all ages and skill levels. In addition to the contest, BMX Fest adds to the excitement of the day’s competition by including a vintage bike display, vendors and entertainment just for kids.

The Trans Jam BMX Contest Series is a family-friendly event and entirely free to the public. In addition to the variety of aforementioned activities, guests will also have the chance to witness some of the riders from the American BMX Stunt Team, seen on “America’s Got Talent,” battling for the day’s pro purse at each event location; patrons will also have the opportunity to get autographs and meet some of their favorite pros.

The 2015 Trans Jam BMX Contest Series is presented by Maxxis Tires, the Got To Be NC Festival, the Athens Orthopedic Clinic Twilight, the King BMX Stunt Show, and Airtype Studio.

Those interested in participating as a competitor in the Trans Jam BMX Contest can find more information on the contest website, www.transjambmx.com. Pre-registration for the Athens & Raleigh stops has opened, and a $5 discount will be given at the event for those who pre-register at least 30 days in advance of each stop. In addition, those who pre-register will be placed at the bottom of the heat lists, competing in the prime spots on event day. Competitors may pre-register by going to www.transjambmx.com/pre-register/.

The Atlantic Bike Stunt Alliance is committed to promoting the sport of BMX around the globe through exhibitions, special events and festivals, and competitions. The Trans Jam BMX Contest Series is owned and operated by the ABSA. For more information, visit www.transjambmx.com.