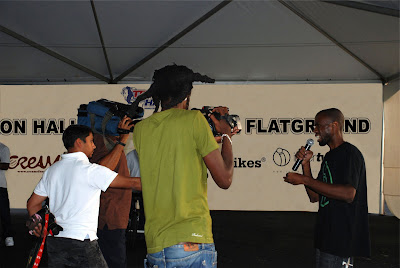 The opening was awesome. This was basically the layout..
1) Our National anthem.
2) Words of blessings from a Reputable Pastor in the community.
3) Video presentation with Bmx Flatland to help the audience understand more about our sport and its magnitude internationally.
4) Jesse Puente spoke about bmx flatland and infrastructure.
5) Alain Massabova Spoke about bmx flatland and infrastructure.
6) Trevlon’s first Sponsor (Algico Insurance Manager – Victor Copeland) speaks to the audience on how he meet Trevlon and his growth over the years.
8) Trevlon Hall Speaks to the audience about his humble beginnings, the magnitude of the FlatPark accomplishment and his future plans for continued infrastructural development.
9) Government official cuts ribbon with Trevlon and officially declares the FlatPark open.
10) Flatland demo begins and everyone has fun until close off.

The above was basically how everything went. I designed it to be educational to the audience which consisted of corporate entities, government officials, parents, kids and enthusiast to say the least. I only catered for 200 people based on my budget and there was roughly that amount.
Every major media network in Trinidad and Tobago was on hand to cover. So although there was roughly 200 people at the opening – over 800 000 people saw it on National TV and heard positives about flatland on the radio.
My intention was to get as much people informed as possible. and Our local media did an awesome Job at it.

There is already an overwhelming increase in interest since the launch. I get phone calls and emails everyday from young people who are very interested in flatland. It’s ample evidence for me to acknowledge that I am in the right direction and I will continue to build from an infrastructural stand point.

Wow, I would love to hear Jesse’s speech, we you briefing Jesse and Alain, or was that totally freestyle on their behalfs?

Jesse openly said to the crowd,”Trevlon is like obama, he said yes we can..and he did it, I got Trevlon’s Back”. That was one of Jesse’s lines. Jesse also said it’s a really big thing and everyone will benefit, it’s something that has never been done before on the planet.

Though Alain is French he did a very good job of getting some points across in English at the launch. Alain said,” it’s a dream come through and I am very happy to be a part”.

I did not brief Neither Jesse or Alain, they freestyled with their words directly from heart. Both has been to many countries and respected the reality of the achievement.

I will drop a video soon with some of their lines. 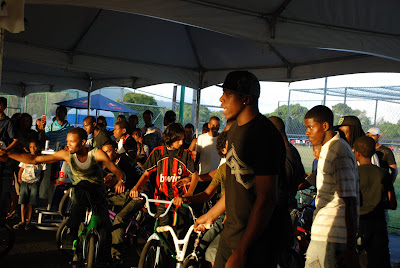 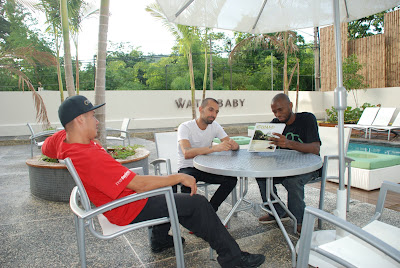 Maybe a bit early to say, but since the parks opening, or even around its buzz of opening, are there many kids taking interest?

There is a far bigger interest now. With all the media and the buzz… My phone is ringing twice as much. Parents, kids and companies who want to advertise in the FlatPark. I saw the positive influx from day 1 in my visions and its happening.
I have locks on the area to keep vandalizers away from the ground. Before I opened the gates yesterday 2 kids in desperation to start flatlanding Jumped the fencing. Since the launch I am seeing new faces and faces who were there in the past returning.
I will only get bigger from here as I am planning major stuff with all my sponsors. Let me re-phase the term sponsor to investors. My projects are long term and investors are happy to be a part of projects that grow and take on brighter life.

A home adds monumental life to our sport and will generate an income which will go directly back into our sport. In other words Trevlon understands the secret of advertising & marketing. I am not here to take from flatland but to give to it. And how is that done? The Ground is situated very close to a high school and in the mist of a thriving residential community.
It’s a gold mine location. Advertisers understand the power of that. My corporate & government support is growing faster and faster. I am a person of principal and great ideas. Serious Investors like organized people with projects that illustrate massive potential.

I will bring a book to flatland in the near future so others can learn some secrets. Literature is very, very important!

Anyways, There is already an amazing build up and it’s only several days after….just imagine the scope in years to come as I continue to focus deeply and act passionately on infrastructure. I spend more time on infrastructure than on riding. I know that someone has too sacrifice the time for the sport to grow. As time go by the scene will mature with a proper foundation. This is how sk8Parks and Bmx Parks are thriving..they got organized and have homes that identify with their sport.

Mahatma Gandhi said it nicely, “Be the change you want to see in life”. I don’t like talking without serious action. I like to get things done and hang around people with great vision that get things done. I know people from their fruits and if your not bearing it’s enough evidence for me to understand the tree.
If I was a contest Junkie there would be no future for the sport in Trinidad and Tobago. And my actions will benefit even beyond our little island. Contest is great, but I have gifts that will add massive life to the sport and I will continue to do what I am doing. I am in this sport for life! Time is very, very important too me so I have to spend it wisely. What you think and do most you become!
Contest is only one part of infrastructure. There are other pertinent segments that I will continue to build and after years of momentum many will see the fruits of my labor as it blossoms through reality.

Lets keep this short trevlon, so the opening and all of the work must have effected your riding time a lot!!!! are you back to riding normal hours now? Whats that been like for you?
My riding hours have been shortened with all that I have going on. But I will return to at least 4 days of riding as soon as I get certain elements in order and I am almost there. My sacrifice is for a bigger picture so I am not really stressing the riding. Thanks again effraim for taking the time!

3 thoughts on “Trevlon Hall talks about the grand opening of the worlds first official flatland park!”