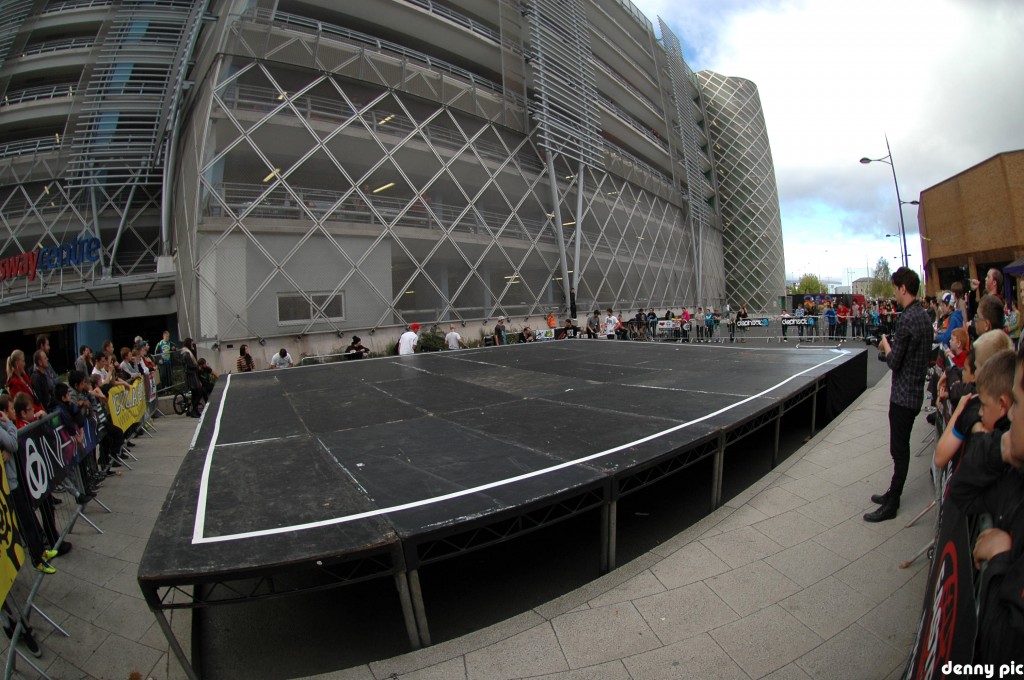 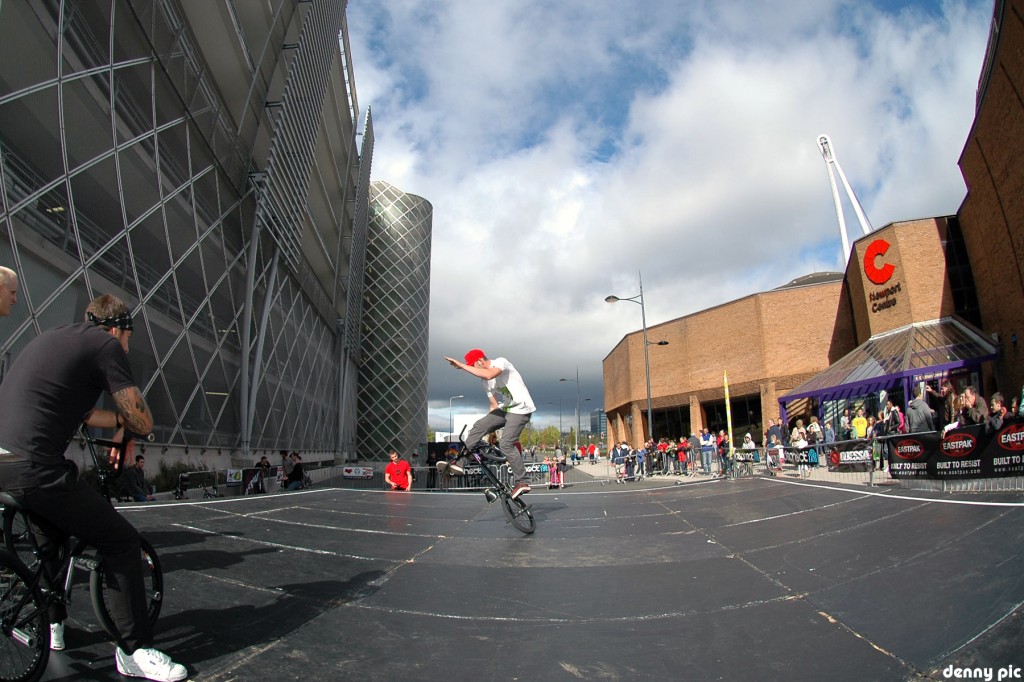 Organiser Matti Hemmings rode his bike long enough to debut his new move to the public!

For the last few years now Matti Hemmings has dreamed of getting a flatland event in Wales. Numerous times I’ve said that it’ll never happen. We don’t have anywhere to hold it, we rarely get the best weather, who would sponsor it, etc. But he was always persistent about how it could happen while I was always sceptical. However, on October 8th 2011, he finally saw his plans come to fruition and I must admit it was damn good.
Riders ventured from Birmingham, Torquay, London, Plymouth, Bristol, South Wales and beyond to attend, and even though the rider turnout for the event was fairly low that didn’t mean that the quality of riding wasn’t there. And more importantly the sun was out. Bargain.
Matti had being doing a show the day before the event so by the time he managed to get back to Wales it was dark so he couldn’t really check the stage set up until the morning. Rather than drive all the way back to mountainous Brecon he opted to stay in Newport at a Travelodge ready for an early start. Early! He got to the Newport Centre at 6am to set up the banners, check out the stage that had been erected the afternoon before and generally get things up and rolling ready for the riders to turn up. 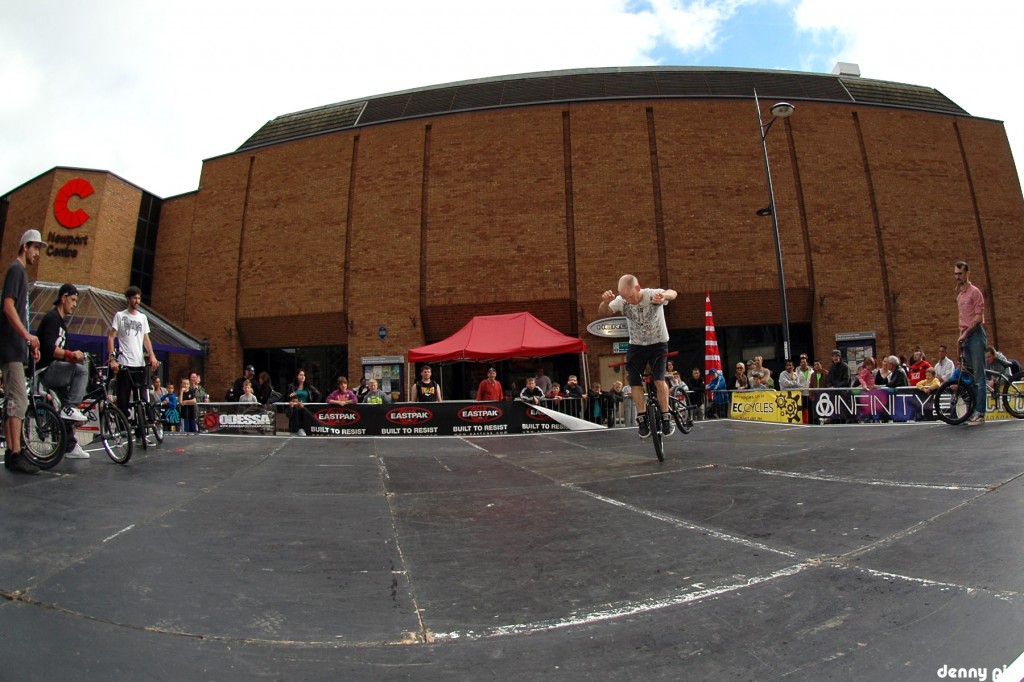 One thing to note here that not only did Matti plan all this event, secure sponsors and everything else that holding a comp entails he also managed to make sure the riders had free refreshments for the day, free food (noodle bar) and also free parking in the city for the day. One of the riders suffers from food allergies so Matti even got money for him to buy what he wanted to eat from wherever he wanted- you certainly don’t get treatment like this at many comps so it was good of him to try and help out the riders in every way he possibly could.

The event was held in Newport town centre so was free for the public to view, which meant it was a good showcase for flatland, and also for Joe Bloggs to understand what it is we really do on these bikes. (If the weather had been bad that day he made provisions for it by having an indoor spot in the basement of the Riverfront building on standby with room for up to 200 people. So glad we didn’t need it.)

There was a slight problem with the stage being slightly uneven to start with but was soon rectified as the riders tested it out and everyone agreed it was good to go. Flatlanders – ready!

It was decided that due to the small number of riders it would be better for everyone to enter one group. Lee Musselwhite, Josh Briars, Mario, Andy Hale, Steve Green, Andy Wood, Oliver Griffin and myself (Matt Dyer). Matti felt that he shouldn’t enter as it was his event and due to running round all day like a blue arsed fly getting everything sorted, arguing with the stage men, MC’ ing, and only 3 hours sleep he was cream crackered. He did however ride on stage demo style for a while and pulling all manner of front and back wheel tricks. He even went for his new signature move – foot on the grip, other foot on the pedal and spinning on the back wheel pedal picker style- the riders seemed to like it – time to name it now Matti!. With the public waiting in anticipation it was time to do battle.

8th place went to Oliver Griffin, who did various hang 5 variations and megaspins switch footed and regular all over the stage. The crowd love a good hang 5 for sure.

I nabbed 7 th place. I only entered for a bit of fun and to bring some old school flavour for the crowd’s enjoyment. Boomerankle, funky chicken to blindside candybar half decade out, backwards barspinning infinity rolls (always a crowdpleaser) a Nourie, and attempted a few double decades until my knee cartilage jammed up.

6th place was Mario’s. Steamrollers, elbowglides and hitchhikers all in one link. Megaspin to decade, funky chicken to frontyards and a few double decade attempts amongst other tricks old and new. Mario will have the double any day now going by his recent edits. Tidy!

Andy Wood secured 5 th with plenty of front wheel rolling links with wheelchairs, hitchhikers and more, combo’s with pinkys squeaks and all manner of scuffing and switching back and forth. Good stuff from Andy. 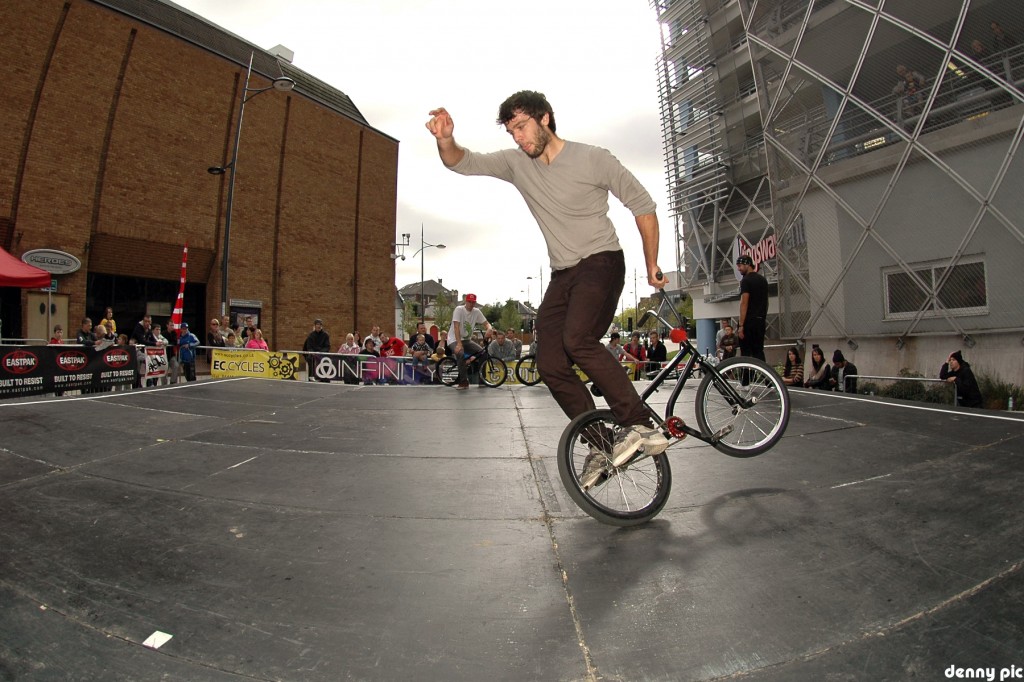 Andy Hale’s second contest in the pro class, Andy bagged 4th here, look out for this guy in the future!

4th went to Andy Hale. He busted out some incredible rear wheel combo switches and I especially like the meagaspin to two footed rolling dumptruck done with speed and style, as well as the rolling backyard. Ace. His finale was a rollback to switch foot boomerang smoothie out on the front peg. Very different.

Josh Briars had some epic moves in his runs. Whoppers, hitchhiker combo’s, time machines, hang 5 with vader squeaks so he was going forwards, backwards, forwards g turn style. He couldn’t quite nail the rollback half cab whopper, but was so close. 2nd place to the man.

Lee Musselwhite took 1st place honours with loads of clean megaspin combo’s to reverse spin switch hand and foot to switch forward rolling trolley (if it’s still known as that- I’m old school) pivoted out to megaspin to decade, rolling two footed backyard jump to wheelchair links, the phoenix and various other tricks only Lee can do. So much bike control. Top marks.

Little fun comps took place to end the day including longest to stay on a funky chicken (Steve Green) which was amusing when all the riders were taking each other out left, right and centre on stage. Best old school I managed to bag (mind you I turn 40 next week so these newbie’s probably never knew some of these tricks existed) and best trick as I mentioned earlier was Steve Green and the g turn messiah. Everyone who entered walked away with a prize in some shape or form which was a nice touch. Top stuff to finish what really was a great day out for everyone who came. Hopefully the next one will be even bigger and better.

*There was a bit of a backlash about this event, via the net but in all honesty unless you were there you can’t really comment on whether the event was good or bad. Matti did everything in his power to help the riders out with free food and refreshments, and free parking. It was about time a flatland event was held in Wales – the last flatland comps were probably way back in 1988 with the UKBFA Open comps in Merthyr Tydfil – up in those valleys. With Newport being just across from the Bristol border in England it really was very accessible by train or car. All the riders had to do was get there which is the same as in any comp anywhere in the world today. * 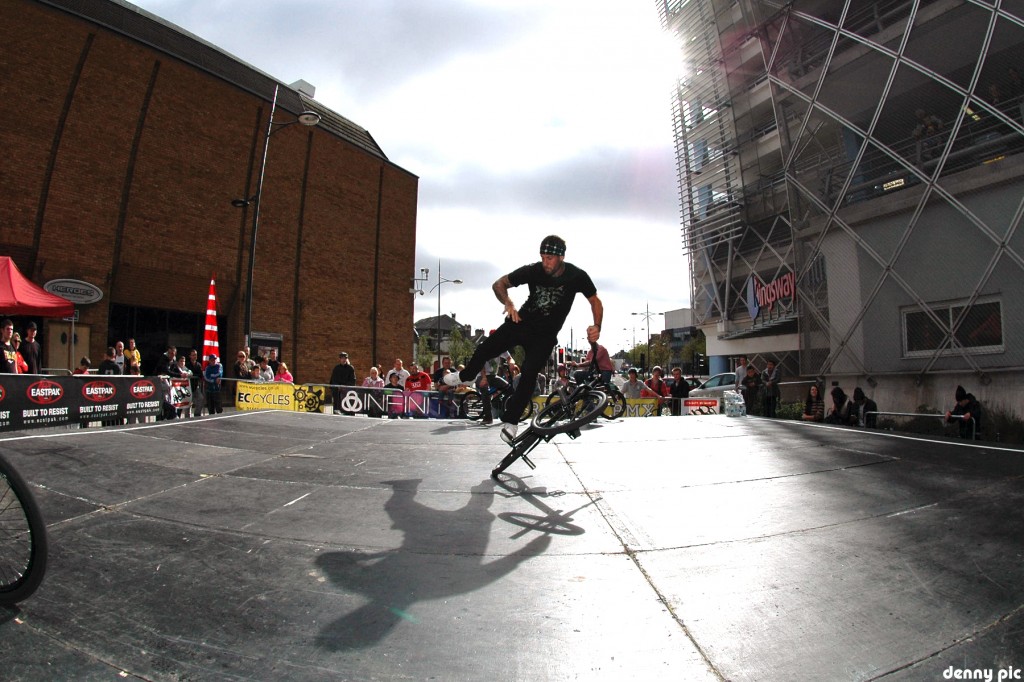 Lee Musselwhite on his way to the first place at the UK Champs!

Thanks to all the sponsors- Eastpak, Dephect clothing, EC Cycles (for the cash prizes), Crucialbmx, Oner Signs, Infinity Powerbands, Odessa Shoes and ValleySideDistro.