As you might guess Ultra Zai is the sequel to Zai, I’ve been sitting on this one for a few months now. So it’s about time that I reviewed it. Slack I know.
The video begins with a photo montage animation of various flatlanders worldwide old and new mixed with pencil drawings, kind of reminded of the Reality Tv animations if you have ever seen those.
The editing right away looks slicker on Ultra Zai, perhaps hence the name, I don’t know, the dvd retains a similar format from the zai dvd, I could describe it as one big huge collage of japanese flatland, park, and street…

The first main section goes to Akira Okamura blasting around a skatepark, jumping the box, down whips, pocket wall rides, handrails, downside 50-50’s, street riding, generally looking like he’s having the time of his life! There’s only one flatland clip in this first section, a gliding dump truck both hands on the bars (what Ucchie does sw ft he does regular).

The next section is a collage of partying footage, Chuncheon games in Korea, ton of great footage from Takahiro Ikeda, Viki Gomez, Keisuke Tanigawa drops an insane combo- xft ankledeath ride in whipped to xft hang five to crackpacker to left handed halfpacker pivot to opposite xft hitch pivot and whip to left handed halfpacker inside xft steam pivot to steam pivot juggler hitch and “bail”, awesome practise combo tho!, few riders I don’t know round out the section..

The next section flows into more underground non-contest footage, once again there are a few riders I don’t know ripping it up, mostly night time filming sessions, gives you an idea of the real Japan. Russia is perhaps the most famous rider in this section, developing his Osicka style further, mixes some highly complex moves such as g-turn bar flip x bar hang five 360 flip to steam and repeats, effortless flow. The video goes back to some street/ flat hybrid action, nose manuals, x up manuals, curved wall rides to toboggan, manuals to whips, as you might expect the japanese are getting uber tech on the street!

The next section begins with more street, then quickly flips into a killer back wheel combo from Takio Kenata, Liquid style, xft carved peg wheelie to multiple turbine upside down g-rolls to backwards spinning g-roll flipped to two footed backyard back to carved g-roll two footed turbines x’ing bar flipping and out, back wheel skills to die for! the dvd goes back to some street, then flows into an unknown rider, who does a really nice carved halfhiker step round to halfpacker, you have to see it i guess…He also drops a lovely xft karl 30 pivot to halfpacker as well later on in this session, which lead me to think, why’s no one done that??
The section into a collage of footage of Matthias Dandois, you see so much of Matthias week in week out all year its kinda hard not to know his combos, matthias has a good healthy sized section, the highlight for me was the steam to teakettle turbines jump to backwards spinning xft steam opposite side (infamous yammer style) no scuff jump to steam crackpacker boomerang to pendulum (ala Mr Foakes) to halfpacker inside xft steam out, monster combo! 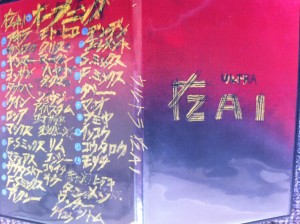 The video flows into a big street riding section. The next flatland section goes back to the undercover spot in Tokyo, Ucchie and Tsunari session in Zai. Yuki Itoh opens the section with a big combo, steam to leaned left handed hitch turbines steam reach thru the bar to crackpacker steam hang five turbine kick bar flip to spinning cliff. Really tight looking. Tsunari bunnyhops straight from pedals straight to steam and out, I love the shortest of this combo, shows how hard the trick is! The section flows into a bunch of KOG Finals 2010 footage, featuring a bunch of am before Taiko returns with a beats of a combo, two foot xft peg wheelie pivot to two footed backyard pulled up to forwards g-roll into backwards spinning g-roll pivot to two foot backyard pulled back up g-roll turbines to pedal time machine, dope steez, could watch this guy kill the back wheel all day! So dope!!!

The next section is without doubt the best of the dvd, and it belongs to Alexis Desolneux, everyone knows Alexis is an absolute beast, and his section had me yelling at the screen, his section opens with a nicely carved double opposite backwards whiplash where he stalls out in between each xft whiplash in a backwards guillotine, so sick! The next trick I couldn’t even tell how hard it must be, a backwards facing turbine whiplash!! Alexis continues with a whole load of in front of the bar whiplashes with epic control, before dropping the hammer or so at least I thought! Four backwards facing whiplashes to backwards no handed messiah backwards whiplash out! Unbelievably he tops it with long carved backwards facing whiplash to turbine then backwards whiplash again! So technically hard, what a treat! High 5’s all round from the locals at the spot! Mind blowing level from Alexis!

The next section shows the Chuncheon game Street contest, followed by an underground flatland contest with nothing but slams, featuring Moto Sasaki, Akira, Shinde, Hiro, it gets pretty wild here, im not sure what the deal was here, best crash maybe?!

The dvd goes back into another street section before going back to Ucchie and Tsunari’s spot, Ucchie kills with a nice carved rolling lawnmower pivot to xft pumping backyard, Tsunari pops the infamous pedal bunnyhop to steam, this flows right into some combos from Hiro, classic Hiro style! A whole bunch of KOG/Chuncheon Games footage continues, focussing on Am riders which I thought was a nice touch!
The next section is Daa, you may remember him from Diversion, ‘my style….Magnetic”, super nice xft 360 pivot ride into halfpacker,such a nimble style, killing this undercover spot, really liked his whiplash jump to and pivot to steam hitch juggle steam body varial rideout, the lights get turned out on the session, this flows into some underground dudes shredding jumplashes hard, a sick ending to a great dvd! To sum up, some awesome clips of underground japan with a mix of KOG footage, with an essential bit of Alexis Desolneux thrown in for good measure. Sound like your cup of tea?