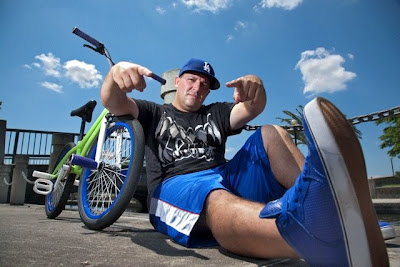 So voodoo jams scheduled for this weekend. How much work goes into running your own flatland contest?
More than any of you want to know! We have no staff so Terry and I with the help of family pretty much do it all. Some riders and others step up during the contest to help run it the day of.

How long has the voodoo jam been running?
Since 2004. In 2005 we had the entire contest set up and ready to go but Hurricane Katrina screwed that all up so it was cancelled that year.

How did the voodoojam become part of the world circuit?
Because I am the boss! Haha!

What are the aims of the world circuit?
To grow Flatland and give Pro riders what they deserve, a ranking.
A ranking can help riders to get sponsorships and exposure in many ways outside of Flatland.

How can people become involved in the world circuit?
We can always use help. At this moment we would like to have someone solicit sponsorships for the Circuit. We could also use a media person to help promote us.
Basically its an open book and anyone can step up an volunteer. It could one day turn into something that pays off. I hope to one day have a huge purse for riders and pay towards event production. It would also be nice to pay professional judges that have a certain criteria towards Flatland BMX.

How do you decide who judges?
Experience is the first factor. We also look at the how the judge has done in past event. Of course they are volunteers as well so there motivation is a factor for actually taking the responsibility of judging. Terry and I always go over it.
Ed Nussbaum offered to judge this year. This was great for us. He volunteered his time and money to fly out so he can judge. That is a perfect example of a rider giving back to Flatland. He judged quite a bit back at CFB’s for Am and he knows what’s up.

Running the voodoo jam in a nightclub presents a tight schedule cause you hire that place, with bigger budget would you do things differently?
Bigger budget would bring more production. Lights and other things like that would add to the event.
We would also rent out an extra day as well. This would allow more time to practice and run the event.
We could also do more for the Pro riders like pay travel and hotels.

The world circuit is in it’s second year now, how do you think it’s going so far?
Actually its the 3rd year.
Hiro 2006 and Matthias was 2007 Champion. I think its going well.
I have some changes to discuss with Yasu this weekend that I want to make. I would like to make it easier for the riders to attend the events. So maybe we will add a few more stops and take 2 highest scores to the Finals for the Circuit.
Because there are not many sponsors for riders they have a difficult time with travel.

Has the world circuit benefitted any riders you know of?
Yes it has. I have talked with several riders that told me there sponsors where excited about there rankings. Also riders use there ranking to explain to audiences outside of Flatland and they immediately get it.
For example when Terry and I do shows for Red Bull or at a school I always use his world ranking when I announce him. The crowd automatically associates with that and respects the rider for his accomplishment.
My goal is for riders to be able to approach a company like Coke or Nike and say for example, “Im the 4th rank rider in the circuit” and those companies will relate. Its gives professionalism and merit to what we all do.

As the mc any rules for yourself, you have regrading types of riders, I noticed you are louder for some riders, and some you are more cautious with?( as in you don’t want to put off anyone etc)
Well some riders actually ask me to chill for them so I respect there wishes and others feed off of it. Its also up to the rider to pull some crazy shit cause thats when I go nuts. I love seeing these guys reach there goals after so much practice and hard work. I also love for the audience to feel that as well and thats where I come in to let the audience know by representing the rider on the floor at that time. Im his voice while he is riding!

Is this really the last year for the voodoo jam?
All I have to say is treat everything in life like its the last time, you never know!