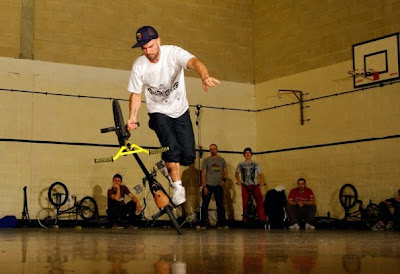 Whitey in effect, back wheel style for a well deserved first place, photo by Robert Voller.

Text by Effraim, photos by Johann Chan and Robert Voller.

The level vibes weekend began at the Green mile on an overcast Decembers day, good turnout of around 25 riders, all to ride the infamous spot in Wet Norwood, or is West Norwood. This time of year the floor at TGM struggles to dry, one of the funniest moments looking back was Phil Dolan’s dog shitting on the floor haha, most riders sessioned till around 3pm, until it rained, we hung out for while in the rain, which Jeremy Brosset couldnt believe it, “in France we’d be inside an hour ago”….
As is almost TGM folklore we headed to the pub opposite, what followed was one of highlights of weekend, a random game of “flat trivia” just for kicks, after couple of beers and much laughter, myself and Jeremy headed off to find hotel in Dartford, ready for the next day. 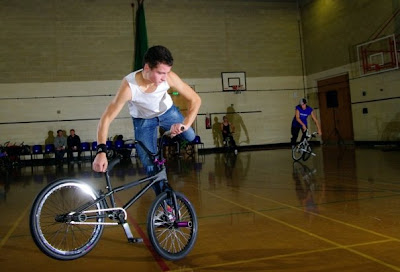 Sunday morning and Wow!!! Level Vibes came back with a bang and wake up call to everyone, that “hey the uk scene is alive and kicking”, James White reports that there 80 heads in attendance. It was busy!!! The underlying focus of the event was to support the grassroots scene here in the uk, and keep it alive, Whitey certainly did that, and deserves much respect for his efforts!!!
The name “Level Vibes” brings back memories of goosebumps in the Kidbrooke hall ten years ago for me, it’s been nine years since the last Level Vibes, which Martti single handly shutdown and I sadly missed..
There were three groups, Novice, Expert and Pro. Each group having a strong field of riders.
I was really stoked on the Novice and Am classes, where friends and fellow riders got behind the youngsters and beginners, and created a great atmosphere, with DJ Silence (Stuart Rose) spinning the hip hop/dnb/dubstep all day, the atmopshere was at times electric!!! 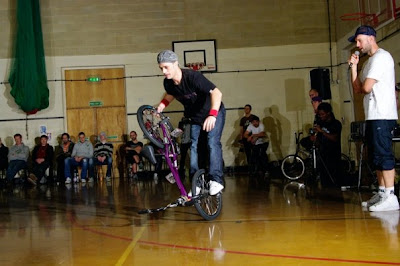 To kick off the contest, James held a longest hang 5 contest with the beginner class, which I believe was won by Chris Carter, who rolled the floor back and forth twice in brakeless fashion.
Whitey on the mic has been compared to that of a bingo dj, creates a funny laidback atmopshere.
The TGM boys were representing hard in the Novice class, with great riding from new comer Yinka, who had a no touch run, the delight on his face and all his friends, for me made the whole day whole while, and if the kid sticks at it, he will be moving up the places very fast!!! Much respect!!
Stu Maclaren attends all the UK events, and has some unique tricks to bring the table, gutlever direct to steamroller, you might not see that everyday, and on this day was rewarded with third for his efforts.
Reknowned by MC Whitey as having the smelliest feet on the flatland circuit Salavdor Brown recovered from a gnarly mega spin crash earlier on the slippery leisure centre floor and had a great run, pulling smooth Backwards Gadget whips, Mega spins, Xft Mega spins and may well have won the whole contest but for Chris Brown who should have been boosted up to Expert class in hindsight, but what’s done is done, Chris had the highest level of the class, Dump trucks, rollback brakeless decade, opposite chick squeaks brakeless style, and won the Novice class at Level Vibes!!! And a whole host of prizes by Flatland fuel, Odyssey/Flatware, Emer, Black sheep, and Vans…James handed out prizes to everyone, which was awesome!! Much respect to all the riders in the Novice class, you are the future, keep at it!!!!! 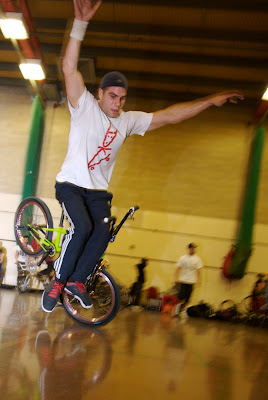 Navid Saleki came all the way from Holland, with his bag of original tricks, mid x foot no handed hang five, winner of the expert class!! Photo by Johann Chan..

Things hotted up nicely in the expert class, with some international flavour in the mix to spice up proceedings!! So much good riding went down, standouts, Howard Avery 41 years old busting mega spin to inside opposite xft gerator!! Much respect Howard!!! New face Kevin Browne was very consistent, fast backwards spinning lawnmowers, came all the way from Ireland with Mizo..The UK’s brightest new talent, Andy Hale had some of the hardest back wheel tricks of the class, 360 bike pivot to dump truck smooth as you like followed by xft pivot gerator two footed backyard out, but few too many touches kept him in fifth. Jeremy Brosset came all the way from Lyon France, his first time on a plane to get to London!!! Jeremy could have won the whole class but got stuck trying brakeless perverted rolaid a few too many times, sliding out on the floor, but got it done fifth try!!! Sick rider… keep an eye out for him!!! 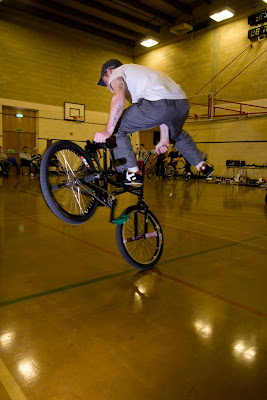 Third place went to a very much improved Mizo, who made the trip over from Ireland, fresh on a new tricked out Quamen Cypher, Mizo rolled Double inside whiplashes to steam to jugglers and crackpackers, jumped effortlessly from crackpacker to rolling backyard, congrats Mizo!!! Mr Smooth, the Uk’s Shintaro Lee Wilson kept it smooth and clean, with around the worlds, spinning lawnmowers, a nice hang five jump to steam turbines and out, Lee was pipped for first by Navid Saleki from Holland, who brought a lot of originality to the table, awesome to see!! Steam jumps to mega spins, backwards quick change tailwhip to karl, Fork wheelie hop to forwards karl to forkwheelie bunnyhop karl exit, I think Martti on the groundtactics forum said it best “Navid you do wierd tricks and I like wierd!”… 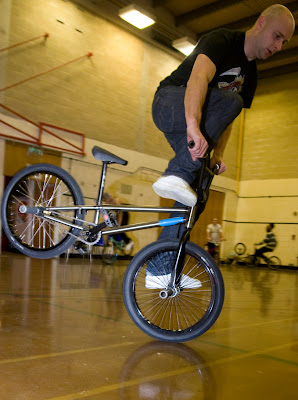 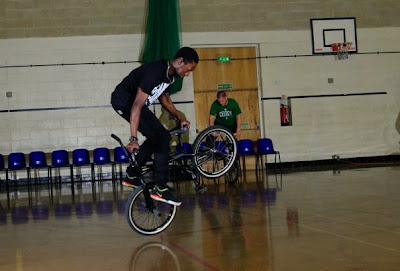 “Holla at me” TGM’s very own Jason Forde steam jump to crackpacker, photo by Robert Voller.

The next event up was the Pro jam, normally the highlight of Level Vibes, but for some reason didnt quite work out this year. What good riding did go on was by either Viki Gomez or Sam Foakes, two styles of flatland riding which are totally different, Viki was fresh on board a new Quamen Cypher, one of the best tricks I saw from him was in practise, Hang five no hands on bars jump to one handed steam without bars flipping, also fire hydrant flip direct to no handed tea kettle, nuts switch!!! Viki’s riding is very technical, lot of fast switches whilst Sam Foakes is more brutal with his riding, being that Sam hadn’t rode in two weeks, the level of riding was amazing, I’ve seen him ride a lot better, but I see Sam ride a lot more than most, steam triple whip to crackpacker whip to halfpacker turbine to backwards backpacker, and of course no pumps!!
The two best riders didn’t ride, Viki had to go shortly after the jam session, and Sam isn’t competing so helped judge.
James brought back the traditional three minute run, as of previous LV contests.. 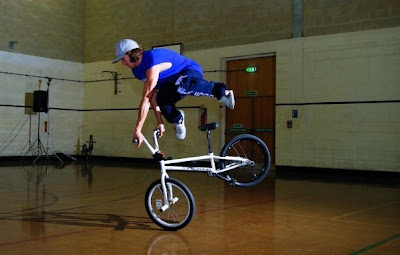 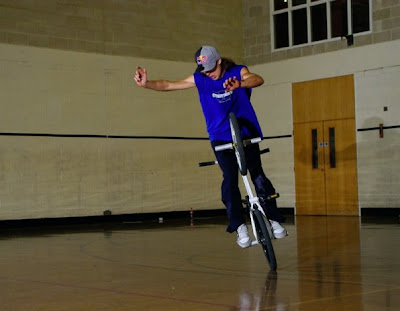 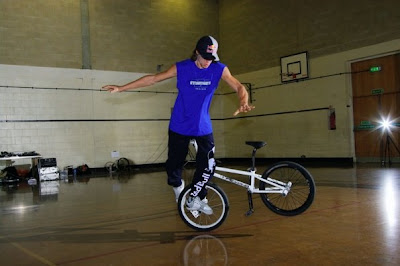 Couple of sweet shots of Viki Gomez, on board new Quamen Cypher, Viki was over to visit his sister in cambridge, unfortunately had to leave before finals. Photos by Robert Voller.

This year, James had set up a practise area and contest area, half hall each for both, which worked well especially if you wanted to warm up before your run.
Giannis from Greece kicked off the Pro contest with his unique bag of tricks, standout for sure was his pedalling time machine to half backwards decade out. Jason Forde nailed a super nice time machine to brakeless decade out…Steve Green impressed with his originality, no handed messiah no handed walk over to halfhiker…James Smith made it across London on his vespa, smoothly walking around whiplashes to hang ten grab juggler out…Sakis from greece turbined cabooses and gerators both two feet on pedals… 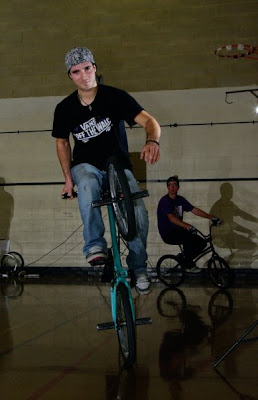 James White’s commentary for his run was quite amusing, “the next rider is me”, James deserved the victory, uneffected by the slippery floor, he laid down a solid opening multiple whiplash hitchiker whiplash hitchiker whiplash hitchiker combo, his double xft upside down flip to gliding dump truck, James won a painting donated by Griff..
Second place went to myself, I had trouble all day sliding out on anything spinning or turbining, I had previously been practising on a wet marble floor and thought this would help, and admittedly didn’t have a great run.
Phil Dolan took the third place spot with his signature mega slow nose manuals and long carving around the world combos…. 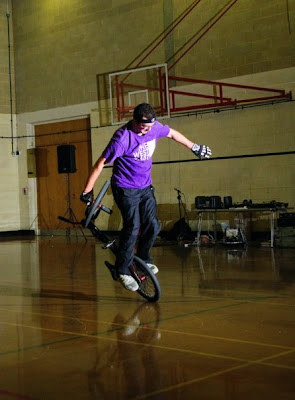 To summarise this was a very successful Level Vibes, lot of novice and expert riders went away stoked, and that was the whole point! Parts of the contest worked, parts didn’t, some things click into place and “just happen”, (i.e with reference to the jam circle).. One thing is for certain for me, Uk flat is alive and well, let’s hope there’s more events supported like this!! Thanks to Odyssey, Flatland fuel, Vans, Black sheep, Emer, for supporting this grassroots event. Thanks to James for all his hard work,DJ Silence spinning the tunes all day, Sam Foakes for helping sort out prizes, all judges who helped, and all of James crew…Get practising for the next event….What’s gonna happen to Whiteys blog, i’ll miss checking that everyday….(stay tuned…)

More photos posted throughout the week…
Thanks to Johann and Robert for hooking me up with decent photos.

11 thoughts on “Whitey brings back Level Vibes it back in style!!!”